US Multinationals Expand their Foreign-based Research and Development

"For decades, US multinational corporations (MNCs) conducted nearly all their research and development (R&D) within the United States. Their focus on R&D at home helped establish the United States as the unrivaled leader of innovation and technology advances in the world economy. Since the late 1990s, however, the amount of R&D conducted overseas by US MNCs has grown nearly fourfold and its geographic distribution has expanded from a few advanced industrial countries (such as Germany, Japan, and Canada) to many parts of the developing world ..."

Here's the quadrupling in foreign-based R&D by US multinationals in the last couple of decades: 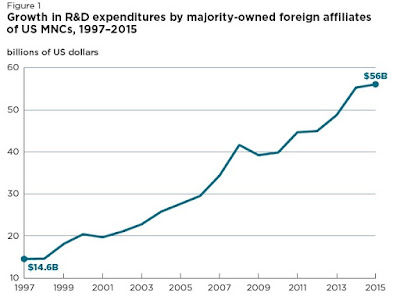 Another measure looks at what share of the patents files by US multinationals are based on cross-border collaboration. It used to be less than 2%; it's now more than 10%--and rising. 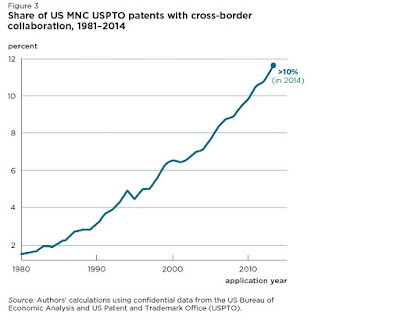 It used to be that almost all the foreign R&D of US multinationals was in five high-income countries Germany, the UK, Japan, Canada, and France.Now, less than half is in those five countries. 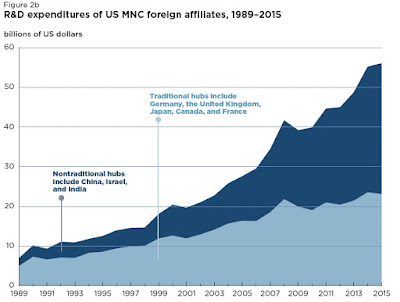 The shift here shouldn't be exaggerated. "While US MNCs’ foreign R&D expenditures have increased dramatically, they still conducted about 83 percent of their R&D in the United States in 2015 (down from 92 percent in 1989)."

But the shift is still a real one. Of course, it's driven in part by the fact that US multinationals are building supply chains across borders and selling output in other countries. Emerging market have been growing faster than the US economy in recent decades, and with some stops and starts, will probably continue this pattern of faster "catch-up" growth in the next few decades. Another factor is that an interconnected world economy, research is more likely to cross borders than research in older industries.

Your reaction to US multinationals expanding their overseas R&D efforts may be shaped by whether you are a half-empty or a half-full kind of person. US multinationals accounted for 57% of total US R&D spending in 2015.

The half-empty concern would be that when US companies shift their R&D overseas, there is a danger of losing US-based technological leadership, with potentially negative consequences for US workers and the US economy. There is a legitimate concern that technology developed outside the US may offer less benefit to the US economy, and may be harder to protect with intellectual property rules.

The half-full response is that centers of technological excellence are developing all around the world, with or without participation by US firms. If US firms wish to stay at the technological cutting edge, they need to  engaged with the researchers and expertise all around the world. not to be separated from it. Also, if US multinationals by basing some of the R&D in other countries, US multinationals are building connections to supply chains and to consumers in those markets.
Posted by Timothy Taylor at 9:00 AM