India's economy doesn't get nearly as much attention as China's. Both economies have a similar involvement in international trade: for example, they both export 19-20% of their GDP. But the US imports about ten times as much from China as from India, and there is a dimension of geopolitical competition with regard to China that isn't present with India.

But India has a population of 1.3 billion, and will surpass China as the most populous country in the world in the next few years. India has the world's eighth-largest GDP now, but plausible growth projections suggest that it will almost certainly be in the top three--with China and the United States--in a couple of decades. In addition, India is full of economic, demographic, and policy changes, many of which vary across the states of India, thus offering rich possibilities for researchers.

One of my ways of keeping up with India is an annual report from the Ministry of Finance. The Economic Survey 2018-2019 is was published earlier this month. It's available in two volumes, with the chapters in the first volume more heavily focused on specific topics and the chapters in the second volume more focused on big-picture macro topics like growth, inflation, trade, budgets, monetary policy and the like.

Of course, I can't possibly do justice to  entire report here. Here are some points and themes that jumped out at me, but there's much more in the report. Here's an overall view of the ten largest economies in the world, measured in current US dollars. The size of the circle shows the GDP for each country using the purchasing power parity exchange rate--in which case China's economy would already be larger than the United States, and India would already be the third-largest economy in the world. country. The vertical axis shows the rate of economic growth from 2014-2018. 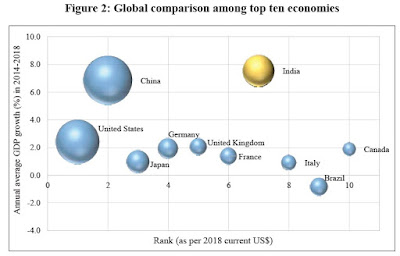 India is at the edge of a demographic transition: lower fertility and a declining number of children, rising numbers of working age people, and a future with a rising share of elderly.


India is set to witness a sharp slowdown in population growth in the next two decades. ... It will surprise many readers to learn that population in the 0-19 age bracket has already peaked due to sharp declines in total fertility rates (TFR) across the country. ... The age distribution, however, implies that India's working-age population will grow by roughly 9.7mn per year during 2021-31 and 4.2mn per year in 2031-41. Meanwhile, the proportion of elementary school-going children, i.e. 5-14 age group, will witness significant declines. Contrary to popular perception, many states need to pay greater attention to consolidating/merging schools to make them viable rather than building new ones. At the other end of the age scale, policy makers need to prepare for ageing. This will need investments in health care as well as a plan for increasing the retirement age in a phased manner. 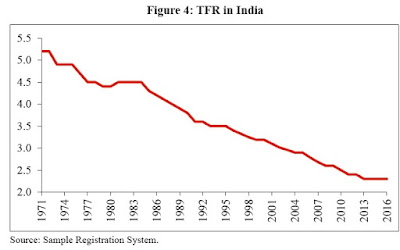 Here's a figure showing the fall in the age 5-14 population in India, and the corresponding rise in the number of schools per million children. As the report notes:


The “optimal” school size varies widely according to terrain and urban clustering, but this sharp increase in number of elementary schools per capita needs to be carefully studied. The time may soon come in many states to consolidate/merge elementary schools in order to keep them viable. Schools located within 1-3 kms radius of each other can be chosen for this purpose to ensure no significant change in access. This would also be in line with the experience of other major economies witnessing a decline in elementary school-going population, such as Japan, China, South Korea, Singapore and Canada, which have implemented policies to merge or close down schools 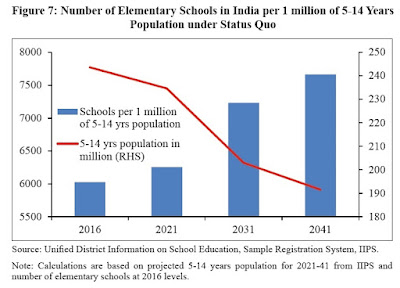 
Arguably the single biggest constraint to ease of doing business in India is now the ability to enforce contracts and resolve disputes. This is not surprising given the 3.5 crore cases pending in the judicial system. Much of the problem is concentrated in the district and subordinate courts. Contrary to conventional belief, however, the problem is not insurmountable. A case clearance rate of 100 per cent (i.e. zero accumulation) can be achieved with the addition of merely 2,279 judges in the lower courts and 93 in High Courts even without efficiency gains. This is already within sanctioned strength and only needs filling vacancies. Scenario analysis of efficiency gains needed to clear the backlog in five years suggest that the required productivity gains are ambitions, but achievable. Given the potential economic and social multipliers of a well-functioning legal system,
this may well be the best investment India can make. ...

As a concerted effort made in the enactment and implementation of the [Insolvency and Bankruptcy Code], India improved its ‘Resolving Insolvency’ ranking from 134 in 2014 to 108 in 2019. This is a significant jump given that the country was stagnating in earlier position for many years. India won the Global Restructuring Review (GRR) award for the most improved jurisdiction in 2018. Financial Sector Assessment Program of IMF- World Bank in January 2018 observed: “India is moving towards a new state of the art bankruptcy regime. ..." An effective exit law promotes responsible corporate behaviour by encouraging higher standards of corporate governance, including cash and financial discipline, to avoid consequences of insolvency. The IBC has made a significant impact on the way the default of debts is viewed and treated by promoters and management. It has initiated a cultural shift in the dynamics between lender and borrower, promoter and creditor. The IBC has paved the way for Operational Creditors, mostly SMEs and small vendors to use the IBC as a recovery tool. The threat of promoters losing control of the company or protracted legal proceedings is forcing many corporate defaulters to pay off their debt even before the insolvency can be started.

India will use more energy as its economy develops, but also is concerned about conventional air pollution and carbon emissions. Finding a balance isn't easy.

This figure compares India's energy consumption and economic growth with a group of emerging market economies where growth has been much faster: China, Mexico, Brazil, Turkey, and Malaysia. For each country, there is a string of points showing the level of per capita GDP and energy use in each year from 1965-2017. As India's per capita GDP rises, so will its  energy consumption. 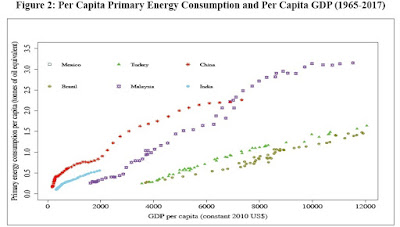 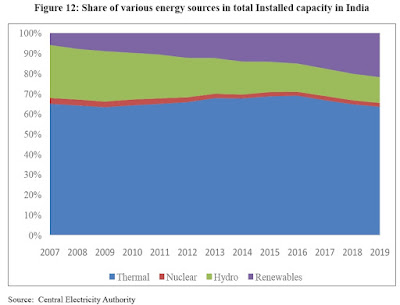 India's government has been taking real steps to address air pollution. For example: "Government is executing National Air Quality Monitoring Programme (NAMP) covering 312 cities/towns in 29 states and 6 Union Territories of the country. Under NAMP, four major air pollutants viz. Sulphur Dioxide (SO2), Oxides of Nitrogen as NO2, Suspended Particulate Matter (PM10) and Fine Particulate Matter (PM2.5) have been identified for regular monitoring at all the locations."

When it comes to climate change, India already ranks third among countries of the world in carbon emissions (China, 28% of world carbon emissions; US, 14.9%, India, 7.4%). India's success in hold downing the growth rate of future carbon emissions will be of global importance.

The Ganga (or Ganges) River is one of the most polluted in the world. India is taking steps to clean it up.  One major step to protecting groundwater across India is the construction of toilets and latrines:


Aligning with the ideals of Mahatma Gandhi, the Swachh Bharat Mission (SBM) was initiated in 2014 to achieve universal sanitation coverage by 2 October 2019. This flagship programme is, perhaps, the largest cleanliness drive as well as an attempt to effect behavioural change in the world ever. Even 67 years after India’s independence, in 2014, around 100 million rural and about 10 million urban households in India were without a sanitary toilet; over 564 million, i.e. close to half the population, still practiced open defecation. Through SBM, 99.2 per cent of rural India has been covered in the last four years. Since October 2014, over 9.5 crore toilets have been built all over the country and 564,658 villages have been declared Open Defecation Free (ODF). As on 14 June 2019, 30 States/UTs are 100 per cent covered with Individual Household Latrine (IHHL). SBM has significantly improved health outcomes. To highlight the impact of SBM on health, new evidence is provided that SBM has helped reduce diarrhoea and malaria among children below five years, still birth and low birth weight (new born with weight less than 2.5 kgs). This effect is particularly, pronounced in districts where IHHL coverage was lower is 2015. Financial savings from a household toilet exceed the financial costs to the household by 1.7 times, on average and 2.4 times for poorest households.


To ensure proper inventorisation and inspection of point source pollution from industrial units, 1,109 Grossly Polluting Industries (GPIs) were identified and surveyed independently by 12 Technical Institutions. The compliance of the operational GPIs in 2017 as against 2018 improved from 39 per cent to 76 per cent. ... 36 Real Time Water Quality Monitoring Stations (RTWQMS) are operational under Namami Gange Programme ...


Those interested in minimum wage laws might want to keep track of India's ongoing policies in this area. Here's a flavor of the current situation:


[T]he present minimum wage system in India is extremely complex with 1,915 minimum wages defined for various scheduled job categories for unskilled workers across various states. Despite its complex structure and proliferation of scheduled employments over time, the Minimum Wages Act,1948 does not cover all wage workers. One in every three wage workers in India has fallen through the crack and is not protected by the minimum wage law.

Again, there is much more in the report itself. For example, I had not known that India receives more remittances from its immigrants abroad than any other country: 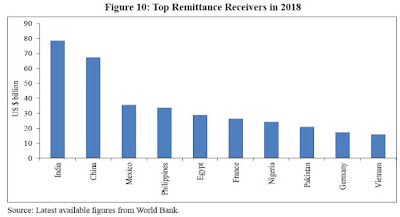 Here are some earlier posts on India's economy: