India has been experiencing episodes of rapid growth since the 1980s, but the growth always seem accompanied by a question mark. Thus, V. Anantha Nageswaran and Gulzar Natarajan write in their report Can India Grow? Challenges, Opportunities, and the Way Forward (published by Carnegie India, November 2016):

"Indeed, in the past twenty-five years, every time India achieved a slightly higher economic growth rate, it was followed by some combination of an external financing deficit, a rise in nonperforming assets in the banking system, a high rate of inflation with consequent currency overvaluation, and other problems. This was the case at the end of the 1970s, at the end of the 1980s, and again in 2012–2013."

A main theme of the report the problems that India needs to overcome to lay a firm foundation for sustained economic growth into the future. While the report often takes a moderately optimistic glass-half-full tone, discussing what policies are being undertaken, I found that I was more struck by the glass-half-empty interpretation--that is, the depth and severity of many of these issues. Here are some examples (with footnotes omitted throughout for readability).

India's education system has gotten children into school, but is failing to teach them

"If education were only about schools, about physical infrastructure, materials, and ensuring universal enrollment, then India has succeeded spectacularly. Every large population center has a school; most schools have buildings and teachers assigned; and students have study materials. It was hoped or assumed that once the schooling inputs were in place, education and learning outcomes would somehow follow automatically. But this has proved not to be the case. Lant Pritchett, an education researcher with Harvard’s Kennedy School of Government, has evocatively described the situation as `schooling ain’t learning.' And schooling without learning leads to very poor educational outcomes, a finding supported by the 2014 Annual Status of Education Report, the largest nongovernmental household survey undertaken in rural India:

"A 2010 study by the Tata Institute of Social Sciences in Mumbai found that only 10 percent of new graduates and 25 percent of graduates of engineering and MBA programs had adequate skills to be employable. Numerous other surveys have confirmed the results."


"A ... major labor market deficiency is the country’s shockingly low female workforce participation rate. At 24 percent in 2014, it was comparable to levels in the Middle East and North Africa, and just half that in Indonesia. A 2015 report from the McKinsey Global Institute showed that the female contribution to India’s GDP, at 17 percent, is the lowest in the world among a sample constituted of countries and regions, and less than half the global female share of GDP at 37 percent. The report estimates that if India did as well as the best-performing country in South Asia on this metric, by 2025 its incremental output would be higher by 16 percent, or $700 billion. But this would require, even more than enabling public policies, a social transformation on a scale equivalent to that which led to the weakening of caste barriers in Indian society in the latter part of nineteenth century and the early twentieth century."

India has a small number of large firms, a huge number of tiny firms, and little in the middle

"The number and proportion of small and microenterprises are staggeringly high. Their contribution to output and employment is infinitesimally small. Yet romanticism in policy circles with micro and small has endured far longer than is justified by their economic value added. Small has not been beautiful, as the capital and labor locked up in these unproductive enterprises represent lost economic opportunity. Furthermore, most such enterprises are informal and operate beneath the radar of tax
authorities and other regulators. ... India’s industrial base has a gaping hole in the middle. Specifically, India has a preponderance of microenterprises and a tiny set of large enterprises. It has neither small nor medium-sized enterprises." 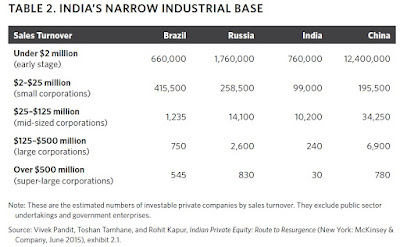 The size of of farms is small and declining, making investment and economies of scale 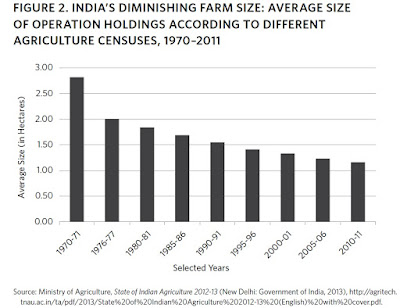 Domestic savings and capital accumulation in India have been low


"The economic historian Robert Allen has documented India’s capital accumulation shortfall. He writes, “Between 1860 and 1990, it [India] accumulated little capital and achieved little growth. Its capital-labor ratio in 1990 ($1,946) and labor productivity ($3,235) were like Britain’s in 1820 ($1,841 and $4,408, respectively).” Comparing the development trajectories of seventeen countries in the 1820–1990 period, he argues that developing countries such as India “need to accumulate capital in the massive way that  East Asian economies have done since 1960 in order to close the gap with the West.” That gap is a huge one to close. Unfortunately, India is constrained by its low savings rate and narrow capital base, both of which constrain it from generating the capital required to sustain a high economic growth rate for a sufficiently long period."


"The narrow industrial base and limited pool of middle-class taxpayers is nowhere reflected more starkly than in the country’s very low tax-to-GDP ratio. India has one of the lowest ratios among the G20 countries—far lower than Brazil’s, for example. Despite India’s large population, the country’s income tax base is comparable to that of a small European country. In 2012–2013 there were just 31.19 million assessees, or less than 3 percent of the 1.2 billion population, in contrast to 147 million assessees in 2013 among 316 million people in the United States." 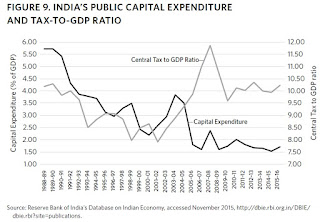 
"The inability to implement government programs is pervasive and dominates the public’s perception of weak governance. India’s government-run schools are noteworthy for neglect and apathy. Teacher absenteeism is rampant; learning levels are abysmal; toilets, where available, are mostly nonfunctional; and so on. In healthcare, doctor and nurse absenteeism is very high, and the quality of primary care services is unacceptable. Even when resources and personnel are made available, most large government-run hospitals remain badly managed. In both sectors, well-designed national programs with adequate implementation flexibility have fallen far short of expectations when subjected to the field test of implementation.

"Inordinate delays in fixing a leaking pipeline or repairing potholes, let alone building new roads or drilling wells, and slow garbage collection are frustrations familiar to most Indians. The execution of small panchayat (the unit of administration at the village level) works, even when contracted and the money made available, takes months to years. And despite the existence of progressive and comprehensive legislation on social protection, atrocities against lower castes, children, and women continue unabated.

"Supervisory systems, even when not compromised, struggle to enforce regulations. The commanding sectors of modern India, infrastructure and urban facilities, are marred by the same malaise. The capacity to design and document projects, manage procurements, mobilize financial resources, finalize contracts, and manage the execution effectively is sorely lacking even at the highest levels of state and national government. It is no surprise that contracting corruption, execution delays, and renegotiations have become quotidian in these sectors."


"One of the defining features of successful economic growth over long periods in the recent past has been the central role of exports. The most prominent example is that of East Asia, where long periods of economic growth were sustained by strong export growth, in particular driven by the manufacturing sector. India clearly exports a far smaller share of its output than did any of the East Asian economies during their high-growth periods. The prospects for the manufacturing sector becoming the engine of India’s growth do not appear promising, owing to the structural shifts taking place in the global economy and the concomitant trend of premature deindustrialization. More worryingly, the prospect of exports becoming a main driver of economic growth also looks bleak."

These issues mostly suggest their own solutions, but implementation isn't easy or straightforward. The bottom line of the report is that India's economy has enough strong areas that 4-5% annual GDP growth remains quite possible. But it's worth remembering that when it comes to per capita GDP, India ranks 150th among the countries of the world, at a level similar to Nigeria and Congo. Annual growth rates of 4-5% would mean that India barely keeps pace with other emerging market economies like China, or gradually falls behind.

For another recent post on India's economy, see my overview of the most recent Economic Survey from India's Ministry of Finance in "The Economic Vision for Precocious, Cleavaged India" (February 16, 2017).
Posted by Timothy Taylor at 8:00 AM