The McKinsey Global Institute reports: "Rvery year, there is about $10 trillion in construction-related spending globally, equivalent to 13 percent of GDP. This makes construction one of the largest sectors of the world economy. The sector employs 7 percent of the world’s working population ..."

However, productivity growth in this sector has been sluggish, both in the US and around the world. Thus, a team of authors from the McKinsey Global Institute--Filipe Barbosa, Jonathan Woetzel, Jan Mischke, Maria Joao Ribeirinho, Mukund Sridhar, Matthew Parsons, Nick Bertram, and Stephanie Brown--has published "Reinventing construction through a productivity revolution" (February 2017).

As a starting point, consider this figure. Each circle represents a country, and the size of the circle shows the size of the construction industry in that country. The horizontal axis shows the annual rate of productivity growth in construction from 1995-2015 in that country. The vertical line at 0% shows that the US construction industry, along with a number of others, has experienced negative productivity growth in the last two decades. The vertical axis shows output/hour in 2015, a standard measure of productivity. It's expected that high income countries like the US will tend to be relatively high in productivity: after all, that's why they are high-income countries in the first place. The countries in yellow are the few examples of nations where labor productivity in construction exceeds labor productivity in the country as a whole. 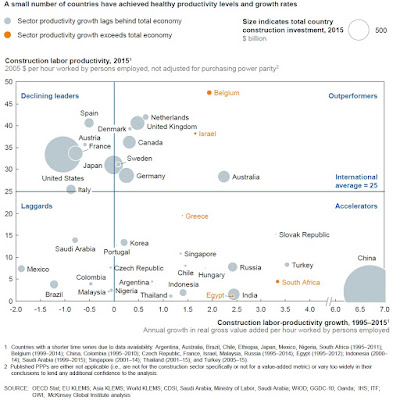 What's going on here? Here are some summary paragraphs from the McKinsey team:


"Even while other sectors from retail to manufacturing have transformed their efficiency, boosted their productivity, and embraced  the digital age, construction appears to be stuck in a time warp. In the United States since 1945, productivity  in manufacturing, retail, and agriculture has grown by as much as 1,500 percent; productivity in construction has barely increased at all. This not only represents a lost opportunity for the industry but costs the world economy. ...

The [construction] industry is extensively regulated, very dependent on public-sector demand, and highly cyclical. Informality and sometimes corruption distort the market. Construction is highly fragmented. Contracts have mismatches in risk allocations and rewards, and often inexperienced owners and buyers find it hard to navigate an opaque marketplace. The result is poor project management and execution, insufficient skills, inadequate design processes, and underinvestment in skills development, R&D, and innovation. ...

"Examples of innovative firms and regions suggest that acting in seven areas simultaneously couldboost productivity by 50 to 60 percent. They are: reshape regulation; rewire the contractual framework  to reshape industry dynamics; rethink design and engineering processes; improve procurement and supply-chain management; improve on-site execution; infuse digital technology, new materials, and advanced automation; and reskill the workforce. Parts of the industry could move toward a  system of  mass production, standardization, prefabrication, and modularization—a production system—that has  the potential to boost productivity by five to ten times ..."

Here's a figure showing how productivity growth in US construction lags that of other US industries. 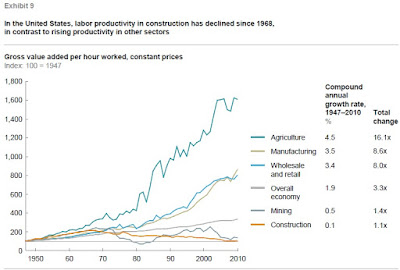 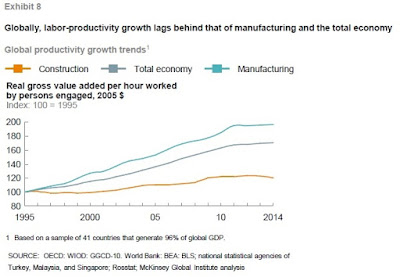 Posted by Timothy Taylor at 9:23 AM