"Productivity is a gift for rising living standards, perhaps the greatest gift. It is not, however, one that always keeps on giving ..." So said Andrew G. Haldane, the chief economist at the Bank of England, in his talk on "Productivity Puzzles" delivered at the London School of Economics on March 20, 2017. Some of the talk focuses on UK experience in particular: here, I want to focus on Haldane's broader perspective on global productivity growth, and on his intriguing argument that from a global perspective, most of the productivity slowdown can be attributed to a failure of innovation to diffuse across countries as rapidly as in the past. 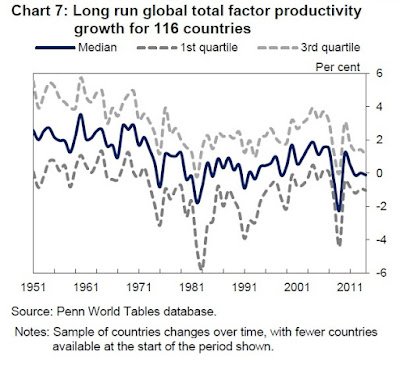 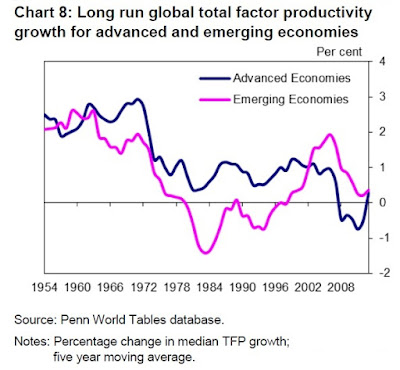 Haldane summarizes overall patterns in the productivity figures in this way (footnotes omitted):

Second, this global productivity slowdown is clearly not a recent phenomenon. It appears to have started in many advanced countries in the 1970s. Certainly, the productivity puzzle is not something which has emerged since the global financial crisis, though it seems the crisis has amplified pre-existing trends. Explanations for the productivity puzzle based on crisis-related scarring are likely to be, at best, partial.

Haldane then turns to the economic arguments about convergence, which suggest that countries which are lagging behind in productivity and per capita GDP should have a natural opportunity to grow more quickly, by taking advantage of flows of technology and expertise from the countries on the technology frontier (for some additional discussion of convergence, see my post on "Will Convergence Occur?" November 25, 2015). As he says:


"Growth theory would predict that, over time, technological diffusion should lead to catch-up between frontier and non-frontier countries. And the greater the distance to the frontier, the faster these rates of catch-up are likely to be. So what explains the 1¾ percentage point slowdown in global productivity growth since the 1970s – slower innovation at the frontier or slower diffusion to the periphery? If the frontier country is taken to be the United States, then slowing innovation can only account for a small fraction of the global slowing, not least because the US only has about a 20% weight in world GDP. In other words, the lion’s share of the slowing in global productivity is the result of slower diffusion of innovation from frontier to non-frontier countries.

"To illustrate that, Chart 10 plots the distribution of levels of productivity across countries over a set of sample periods, where productivity is measured relative to a frontier country (the United States) indexed to one. Comparing the distributions in the 1950s and 1970s, there is a clear rightward shift. Cross-country productivity convergence or catch-up was underway, as the Classical growth model would suggest. In recent decades, however, that pattern has changed. Comparing the 1970s with the 1990s, there is a small leftward shift in the probability mass. And in the period since the global financial crisis, there has been a further leftward shift in the distribution and a widening of its range. Today, non-frontier countries are about as far from the technological frontier as they were in the 1950s." 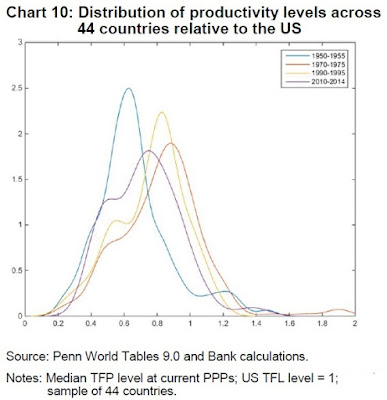 Haldan also offers a graph showing productivity level relative to the US: again, emerging market economies show convergence toward the US level of productivity from the 1950s up through the 1970s, but then shows a divergence in much of the 1980s and 1990s--with no particular convergence or divergence since about 2000. 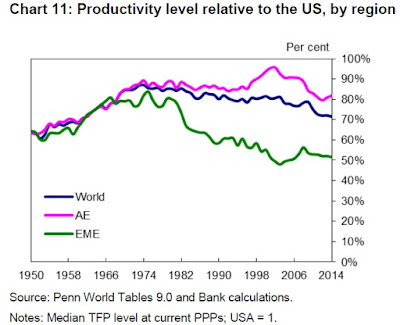 As Haldane puts it:


"One of the key determinants of international technology transfer has been found to be cross-border flows of goods and services, people and money and capital. While they have waxed and waned historically, all of these have tended to rise rapidly since the middle of the 20th century. Other things equal, that would have been expected to increase the speed of diffusion of innovation across countries over that period. In practice, the opposite appears to have occurred.

"Taken at face value, these patterns are both striking and puzzling. Not only do they sit oddly with Classical growth theory. They are also at odds with the evidence of history, which has been that rates of technological diffusion have been rising rather than falling over time, and with secular trends in international flows of factors of production. At the very time we would have expected it to be firing on all cylinders, the technological diffusion engine globally has been misfiring. This adds to the productivity puzzle.

I'll only add that any view of the US productivity slowdown is likely to be incomplete if it doesn't take into account that it's a long-term issue, with a global dimension, and that a decline in the diffusion of productivity seems to be involved.
Posted by Timothy Taylor at 8:00 AM