A few weeks ago, I offered some thoughts on "Agriculture in Sub-Saharan Africa" (February 22, 2017). For a complementary useful look at the urban side of Africa's development issues, a team of World Bank researchers led by Somik Vinay Lall, J. Vernon Henderson, and Anthony J. Venables have published Africa's Cities: Opening Doors to the World. This report isn't a bloodless overview of the trends and patterns of urbanization; instead, it's an argument with a thesis that urbanization in Africa is not serving as an engine for growth.  They write:


In principle, cities should benefit businesses and people through increased economic density. Firms clustered in cities should be able to access a wider market of inputs and buyers, with reduced production costs thanks to scale economies. Workers should consume more diverse products and services, pay less for what they consume, and enjoy easier commutes because of proximity to their jobs. Africa’s cities feel crowded precisely because they are not dense with economic activity, infrastructure, or housing and commercial structures. ...

In sum, the ideal city can be viewed economically as an efficient labor market that matches employers and job seekers through connections (Bertaud 2014). The typical African city fails in this matchmaker role.  A central reason for this failure — one that has not yet been sufficiently recognized — is that the city’s  land use is fragmented. Its transport infrastructure is insufficient, and too much of its development occurs through expansion rather than infill. While the underlying causes of these problems are regulatory and institutional, the effects of spatial fragmentation are material: It limits urban economies. ... And without the economic density that gives rise to efficiency, Africa’s cities do not seem to increase worker productivity.  ...

Cities in Africa are costly for households, workers, and businesses. Because food and building costs are high,  families can hardly remain healthy or afford decent housing. Because commuting by vehicle is not only  slow but expensive, workers find it hard to take and keep jobs that match their skills. And the need for higher wages to pay higher living costs makes firms less productive and competitive, keeping them out of tradable sectors. As a result, African cities are avoided by potential regional and global investors and trading partners. ...

When urban costs drive nominal wages too high, firms will not be able to compete in the tradable sector and will produce only nontradables. The nontradable sector includes certain goods (beer and cement are examples), the construction trade, the retail trade, and many service sector activities, including informal sector employment. Demand for these goods and services comes from income generated within the city and its hinterland — but also from income transferred from outside, such as resource rents, tax revenues, and foreign aid.

The reason why a firm in the nontradable sector can afford to pay higher wages — while a firm in the tradable sector cannot — is that the nontradable producer can raise its prices citywide. By doing so, it passes its own cost increases on to consumers in the urban market. But such price hikes make the cost of living in a city even higher, contributing to the workers’ urban costs. This sequence can become a vicious cycle that keeps African cities out of the tradable sector and limits their economic growth.

The report is full of facts, patterns, and insights documenting these claims across urban areas in countries of sub-Saharan Africa. Some bits that caught my eye:

"In eight representative African cities, roads occupy far lower shares of urban land than in other cities around the world." 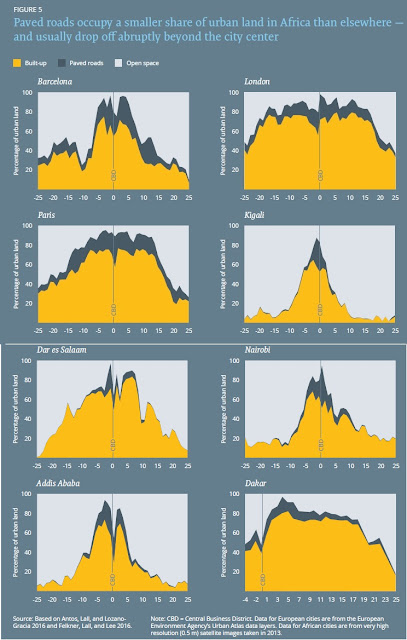 "Related to the predominance of informal housing near African city centers is their relative lack of built-up area. For example, in both Harare, Zimbabwe and Maputo, Mozambique, more than 30 percent of land within five kilometers of the central business district remains unbuilt. This land near the core is not left unbuilt by design in African cities, as it can be in well-developed downtowns such as Paris (which reserves 14 percent of downtown land for green space, making densely populated districts more livable). Instead, outdated and poorly enforced city plans, along with dysfunctional property markets, create inefficient land use patterns that no one intended. The downtown lacks structures — despite being crowded."

"Without adequate formal housing in reach of jobs, and without transport systems to connect people living farther away, Africans forgo services and amenities to live in cramped quarters near their work. ... Across Africa, 60 percent of the urban population is packed into slums— much higher than the 34 percent seen elsewhere."

"African households face higher costs relative to their per capita GDP than households in other regions. ... Housing and transport are especially costly in urban Africa. Relative to their income levels, urban residents pay 55 percent more for housing in Africa than they do in other regions. Urban transport, which includes prices of vehicles and transport services, is about 42 percent more expensive in African cities than in cities elsewhere. ...  For the poorest urban residents especially, the cost of vehicle transport in some cities is prohibitive. The need to walk to work limits these residents’ access to jobs. The price premium for food is also large (about 35 percent)."

"African cities also are disconnected in that they are spatially dispersed. Structures are scattered in small neighborhoods. Without adequate roads or transport systems, commuting is slow and costly, denying workers access to jobs throughout the larger urban area. People and firms are separated from each other and from economic opportunity. And because urban form is determined by long-lived structures that shape the city for decades — if not centuries — cities that assume a disconnected form can easily become locked into it. ... African cities are 20 percent more fragmented than are Asian and Latin American ones."


What public policy emphases are implied by these insights? Lall, Henderson, and Venables write:


Africa’s urban areas are quickly gaining in population: Home to 472 million people now, they will be twice as large in 25 years. The most populous cities are growing as fast as 4 percent annually. Productive jobs, affordable housing, and effective infrastructure will be urgently needed for residents and newcomers alike. In urgency lies opportunity. Leaders can still set their cities onto more efficient development paths if they act swiftly — and if they can resist flashy projects, steadfastly pursuing two main goals in order of priority: A third goal is to improve urban transport and additional services. But this must not come ahead of the two goals listed above — nor can it be achieved unless those are met first.