For the world as as a whole, exports need to equal imports. Thus, the large US trade deficits are necessarily offset, out there in the world economy, by equally large trade surpluses in other countries. From a global perspective, these offsetting surpluses are largely in three countries: China, Germany, and Japan. 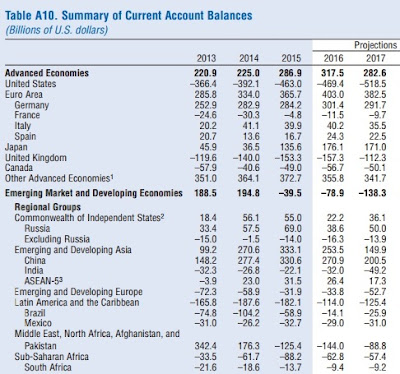 For some additional perspective on trade surpluses in these countries, here are a couple of figures using OECD data. 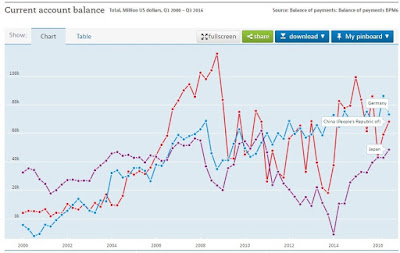 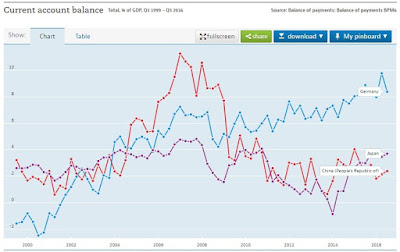 Like a lot of economists, I think the seemingly belief that trade surpluses are a sure-fire sign of economic health while US trade deficits are a sign that the rest of the world is taking advantage of us is a signal of illiteracy in economics. I won't argue that case here, beyond noting that Japan's trade surpluses during the last quarter-century have not meant that Japan's economy was growing in a robust manner.

My sentiments are more in line with those of Adam Smith, whose 1776 classic The Wealth of Nations can in some ways be understood as an explanation of why the widespread political focus of his time on attaining trade surpluses (an economic philosophy known in its time as "mercantilism") was misguided. For example, Smith wrote (Book IV, Chapter 3):

"Nothing, however, can be more absurd than this whole doctrine of the balance of trade, upon which, not only these restraints, but almost all the other regulations of commerce are founded. When two places trade with one another, this doctrine supposes that, if the balance be even, neither of them either loses or gains; but if it leans in any degree to one side, that one of them loses and the other gains in proportion to its declension from the exact equilibrium. Both suppositions are false. A trade which is forced by means of bounties and monopolies may be and commonly is disadvantageous to the country in whose favour it is meant to be established ... But that trade which, without force or constraint, is naturally and regularly carried on between any two places is always advantageous, though not always equally so, to both."

But if the US political system is going to have an argument over how other countries need to reduce their trade surpluses, it is at least clarifying to start with some facts.

China's trade surpluses were very large about 10 years ago, from 2006-2008, but have declined since then, and on IMF projections are already projected to drop considerably in 2017. These projections were from last October, before the US election, and thus were not based on an shift in policy by a Trump administration.

However, Germany's trade surpluses have been growing pretty steadily over time, have now outstripped China's trade surpluses both in absolute size and in share of the economy, and on IMF projections are likely to remain high in 2017.  If we're going to have a political argument in which US trade deficits are blamed on other countries, rather than on high rates of US domestic consumption and low rates of US domestic saving, we presumably should be negotiating harder with Germany than with China.