Some Economics of Parental Leave

The US offers considerably less parental leave than most other countries. For example, the US has a maximum of 12 weeks of job-protected job leave for mothers. In Italy, Denmark, Japan, and Great Britain, the maximum is more like year; in Spain, France, and Germany, the maximum is more than three years. In the United States, none of that time is guaranteed by federal law to be paid leave; in other countries, paid leave is often up to about a year (for example, in Italy, Canada, Sweden, Germany).

Should the US move toward additional parental leave? For those interested in a diversity of views on this subject, the American Enterprise Institute and the Brookings Institution recently started a joint blog the subject of "Paid Family Leave," which within the couple of months includes short contributions from Abby McCloskey, Eleanor Krause and Richard Reeves, Christopher Ruhm, Harry Holzer, Aparna Mathur, Isabel Sawhill, James Pethoukoukis, and others.

Here, I'll focus mainly on the analysis from an article by Claudia Olivetti and Barbara Petrongolo, "The Economic Consequences of Family Policies: Lessons from a Century of Legislation in High-Income Countries," which appeared in the Winter 2017 issue of the Journal of Economic Perspectives. (Full disclosure: I've worked as Managing Editor of JEP since the first issue in 1987. All articles in JEP, from the most recent issue back to the first, are freely available online compliments of the American Economic Association.)

Olivetti and Petrongolo point out that it can be difficult to craft a fully persuasive study about the effects of laws relating to parental leave. For example, such laws may be passed at a time when society has more broadly become more supportive in many ways of mothers with younger children returning to the (paid) workforce. In this case, the parental leave law might be just one manifestation of many other social changes, and so separating out the specific effect of the law from the underlying social patterns is tricky.


"To give an example, women in Denmark and Italy have very similar entitlement to parental leave around 50 weeks, with nearly identical [wage] replacement ratios. However, maternity leave extensions in Italy happened mostly before the 1960s, with long mandatory absence periods before and after birth, especially in manufacturing and agriculture, and no provisions for fathers. In Denmark, the bulk of parental leave legislation came into play after 1960, during decades of rapidly evolving social norms, and with limited substitutability between maternal and paternal leave
rights. Comparable maternal leave rights are currently coexisting with relatively gender-biased norms in Italy—where, according to the European Values Survey, 70 percent of the population agree or strongly agree with the statement “Pre-school children suffer from a working mother,” but with much more gender-neutral attitudes in Denmark—where only 10 percent of the population agree with that statement. In fact, cross-country evidence does not reveal any clear-cut association between the generosity of parental leave and answers to gender-related survey questions. ... However, countries with more conservative views on men and women’s roles in society tend to spend less on early childhood education and child care, and are less likely to accommodate flexible working arrangements."

Broadly speaking, there are two kinds of studies of parental leave policies: cross-country macro comparisons, and micro comparisons of specific laws within a country before-and-after a law is enacted. With the concerns over interpretation duly noted, what does the evidence say? Olivetti and Petrongelo write:

"While both the macro and micro literatures tend to find overall positive effects of subsidized child care on female employment, the discussion above illustrates that no obvious consensus emerges from the literature that has studied the labor market impact of parental leave rights and benefits. Cross-country studies, with weaker identification, point to a positive correlation with maternal employment rates, albeit this effect is limited to short or intermediate leave durations, and mostly applies to less-skilled women, with virtually no impact for the more educated. Extremely long leave durations seem instead to have inhibitive effects. On the other hand, studies on microdata tend to find that parental leave mostly delays return to work, with no discernible effects on employment rates in the long run. ..."

"In a nutshell, there is little compelling evidence that extended parental leave rights have an overall positive effect on female outcomes. The policies with the strongest evidence for reducing gender disparities seem to be early childhood spending (in both cross-country and microdata) and in-work benefits (in the microdata). A potential common theme here is that making it easier to be a working mother may matter more than the length of leave or the payments."

There are a couple of other papers the same issue of JEP that focus on other aspects of the labor force participation of women, but along the way offer some additional thoughts about parental leave. Chinhui Juhn and Kristin McCue write "Specialization Then and Now: Marriage, Children, and the Gender Earnings Gap across Cohorts." They note that parental leave can potentially effect lead employers to treat married women or women of child-bearing age differently. For example, such women might be steered toward less-central positions in the organization where, if an extended parental leave does occur, it will be less disruptive to the organization. Juhn and McCue write (citations omitted):

"The experience of Scandinavian countries produces an interesting perspective. While the expansion of family policies may have increased female labor force participation, much of the increase was in part-time work, and women in these countries were less likely to be in management and professional occupations than women in the United States. Indeed, the gender gap in Sweden is larger at the upper end of the earnings distribution, consistent with the notion of underlying factors leading to a “glass ceiling” that limits women from advancing . Two recent studies using administrative data on earnings from Sweden and Denmark provide convincing evidence that mothers, but not fathers, have large reductions in relative earnings following the birth of their first child in both countries. ... The persistence of children-related wage gaps in these countries with very generous family policies casts doubt on the notion that these policies constitute a panacea that will reduce the gender gap. It is plausible that adopting family policies and other programs that support working families as they go about the business of bringing up children—an expensive proposition—may improve family and children’s well-being. But it is not clear that such policies narrow the gender gap in earnings."

The last point they make is worth reiterating. One justification often given for parental leave is that it encourages labor force participation by women. But a separate justification for  paid parental leave is that it benefits families with children, even if it doesn't lead to a rise in labor force participation of women or a smaller gender gap in earnings. Of course, if the goal is to provide financial support for families with children, one might argue that methods like child-care subsidies or work flexibility matter more,

In a different essay, Claudia Goldin and Joshua Mitchell write about "The New Life Cycle of Women’s Employment: Disappearing Humps, Sagging Middles, Expanding Tops." Again, there is some discussion of parental leave near the end of the paper. I was struck by this figure showing the labor force participation rates of US women before and after a birth, depending on whether they took paid leave, unpaid leave, or quit their job. 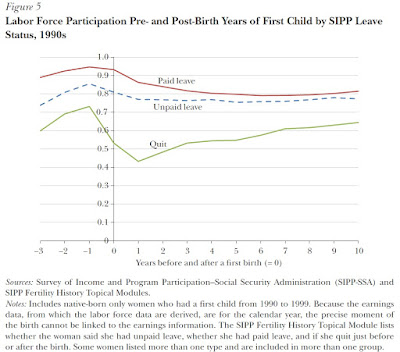 For those who want a bit more factual background, here is a figure and a table from Olivetti and Petrongolo. The figure shows cross-country comparisons in employment rates of women over time. The bars show data for 2010s, but the green x's, blue triangles, and orange triangles show data for the 1970s, 1980s, and 1990s. They write: "In most countries, female employment has increased in recent decades, from 49 percent on average in the 1980s to 60 percent in the 2010s. However, there is no evidence of narrowing differences in female employment across countries. Until the 1990s, the female employment rate in the United States was among the highest in this sample of countries, but it actually declined since then, from about 66 percent in the 1990s to about 62 percent in the 2010s, and now ranks very close to the sample median." 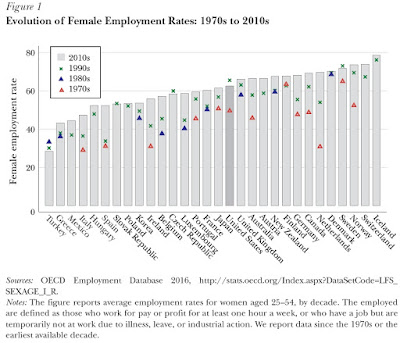 Finally, this useful (if dense) table from the Olivetti and Petrongolo paper showing the wide variation in parental leave rules and other family-related policies across high-income countries: 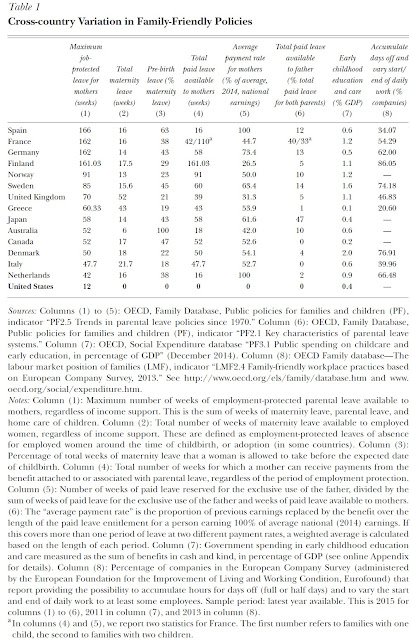 Posted by Timothy Taylor at 9:52 AM