Economic growth has taken off in India. But among economists, there are a variety of puzzles about when growth really took off, why it took off, and thus about how sustainable the growth will be.  Ashok Kotwal, Bharat Ramaswami, and Wilima Wadhwa seek to untangle these issues in "Economic Liberalization and
Indian Economic Growth: What’s the Evidence?" which appears in the December 2011 issue of the Journal of Economic Literature.  (The journal is not freely available on-line, but many students and faculty will have on-line access through their library, or as part of their membership in the American Economic Association.)

Much of the controversy over India's growth arises because certain dates don't line up neatly. India undertook a highly publicized wave of deregulation and market-opening starting in 1991. Main steps included a sharp reduction in limits on imports and on foreign direct investment into India, as well backing away from state control of many industries, including notably banking, insurance, and telecommunications.  However, the surge of economic growth in India predated that wave of reforms--thus leading to controversy over the role of those reforms in the surge of economic growth. The first figure shows the rising level of growth in India's overall GDP; the next figure shows the break from trend in per capita GDP. In both cases, it certainly looks as if the upswing started in the 1980s, rather than after 1991. 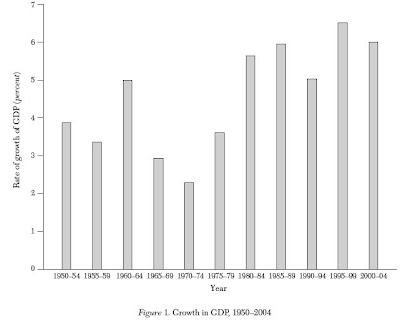 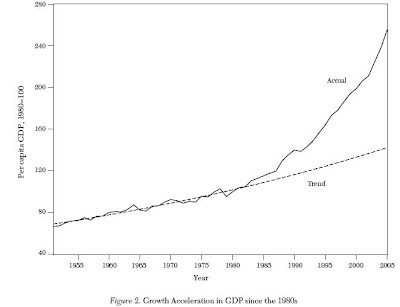 India's growth pattern is clearly not the same growth pattern that has worked across east Asia: including Japan, countries like Korea and the other east Asian "tigers," and now China. Their growth was built on sky-high rates of national savings, which translated into enormous capital investment. It was also built on a widespread commitment to raising levels of education, and to transferring technology into the country. The governments of these countries then offered support for what started out as low-wage manufacturing directed at export markets, in which workers moved from agriculture to manufacturing, and then gradually worked up to higher-wage manufacturing.

In contrast, as the JEL authors explain (footnotes omitted): "However, Indian economic growth, during 1980–2004, seems to have little in common with the so-called “Asian Model.” Its savings rate has improved over time but has not reached the East Asian level. Its growth so far has not been driven by manufactured
exports. Nor has it attracted massive  inflows of foreign investment. There is no industrial policy targeted toward developing  specific industries. On the contrary, it is the service sector that has led the charge in
the Indian growth experience. Another aspect of the Indian experience that makes it very different from that of other Asian countries is that, despite a fast growing nonagricultural part of the economy, the share of agriculture in the total labor force has declined very slowly.  In fact, the agricultural labor force in absolute
numbers has increased since the 1980s, dampening the process of poverty decline."

There are competing interpretations of what happened to India's economy in the 1980s. One view is that the growth of that decade was largely an unsustainable bubble based on unsustainably high government deficits. Another view is that the country was already going to through an attitudinal shift away from the overt socialism of the 1970s, and so that even before the reforms of 1991, seeds of economic change were bearing fruit. Those who want chapter and verse on this dispute can start with the fair-minded presentations of both sets of argument in the JEL article.Here, I'll focus on the take-off of services in India, and the concern that growth from this source is not spreading across India's economy..

The cenrrality of services in India's economic growth is quite clear: "Within the sector, business services (which includes software and information-technology-enabled services), banking, and communications have grown on average at more than 10 percent per year in the 1990s. On the other hand, some other services, such as railways and public administration, have grown more slowly ... As a result, while the services share of GDP is nearly 60 percent, its share of  employment is barely 30 percent. ...However, the most noticeable feature of service sector growth  has been the remarkable expansion of its exports, which grew faster (at 17.3 percent annually) than either GDP (at 7.5 percent) or the services GDP through the 1990s (at 9.2 percent). ... Until the most recent financial crisis, this sector has been growing at 35 percent per annum. Though as yet software sector is only a small part of the GDP and a negligible part of the total employment, it has been the most dynamic sector in India ..."

It seems clear that the wave of deregulation in 1991--which allowed imports of high tech equipment, investment by foreign companies (like software companies), along with economic connections to other countries in telecommunications, banking, and finance-- was essential to the growth of India's services sector.
But India's surge of economic growth also came out of some other factors. The country had built up a reservoir of highly-skilled engineers back in the 1970s and 1980s, many of who had educational and commercial connections in high-income economies, and who were thus ready to take advantage of the economic openings when they occurred. A huge number of potential workers in India spoke English, and thus could provide various kinds of administrative support and staff "call centers."


The ironic outcome is that India is typically referred to as a development success story, while at the same time the country has a larger number of the world's poor than any other.Indeed, there are concerns that India is not educating much of its population nearly well enough for it to have any hope of participating in this form of economic growth.  In a phrase I once heard, India is part southern California, and part sub-Saharan Africa. Here is a flavor of the summing up from Kotwal, Ramaswami, and Wadhwa:


"It is clear from the earlier sections that the growth episode in India since the 1980s is not another instance of state-driven growth in Asia. Instead, it is the coincidence  of the ready availability of new technologies and having the skilled manpower that would be necessary to take advantage of these new technologies. Technology transfers in the 1980s and early 1990s took place mostly through easier and cheaper access to imported machinery that was made possible by trade liberalization. Improved communications (especially cell phones) and the diffusion of the Internet were other technologies that played a big role in driving growth from the mid-1990s on. It is inconceivable that, without the breakup of government monopolies and the advent of competition in the communication sector, there would have been a revolution in communication technology in India. ...

"Indeed, one major feature of India’s development pattern is that the share of agriculture in employment has not come down rapidly. In fact, the absolute amount of labor in agriculture has risen continuously in India while it fell in all countries now developed during their comparable development phases. An important component of growth—moving labor from low to high productivity activities—has been conspicuous by its absence in India. Also, as the labor to land ratio grows, it becomes that much more difficult to increase agricultural wages and reduce poverty. ...

"If we consider double the poverty level ($2.16 per day), a staggering 80 percent of India’s population was poor in 1983 and the number is about the same in 2004. This is a startling fact and indicates that there are two Indias: one of educated managers and engineers who have been able to take advantage of the opportunities made available through globalization and the other—a huge mass of undereducated people who are making a living in low productivity jobs in the informal sector—the largest of which is still “agriculture.” The most direct impact on the second India could only come about through improvements in agricultural productivity. ...  In general, the productivity improvements in the informal sector depend crucially on access to credit, know-how, and skills and therefore on the quality of institutions. India’s future will depend a great deal on how these institutional improvements shape up."