1) Start with a quick reminder for readers who last course in world history is lost in the mists of time. What was the Silk Road?

"The original Silk Road initially developed under the Han Dynasty in China, which ruled from 206BCE to 220CE. For the next 1000 years or so, the Road (or, more accurately, the various routes) linked China with India, Central Asia, Rome (for a while) and, eventually, the Arab Caliphate involving trade in everything from
spices and silk through to precious stones, ponies and slaves. The great Eurasian empires that developed during this period became mutually dependent. It all went wrong when the Mongols, under Genghis and Kublai Khan, managed to spread not just total brutality but also bubonic plague across the Eurasian land mass. Connections were severed and the various routes fell into disuse. Later, as the European nations
developed their ocean-going fleets, the case for expensive land-based trade across Asia economically collapsed. Unlike the original, the Southern Silk Road won’t only be confined to Asia and Europe. It stems
from connections over land, across the sea, through the air and within the electronic ether. And because the costs of transportation and communication have collapsed in recent decades, it is much more geographically diverse, offering the potential to create hitherto-unimaginable linkages between Asia, the Middle East, Africa
and Latin America. If it is able to advance, the Southern Silk Road will radically alter the dynamics of the global economy in the years ahead. The economic centre of gravity is about to undergo a major shift." 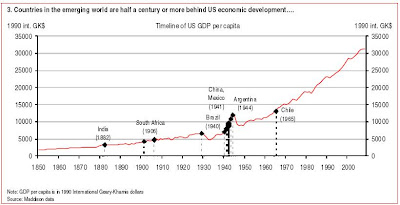 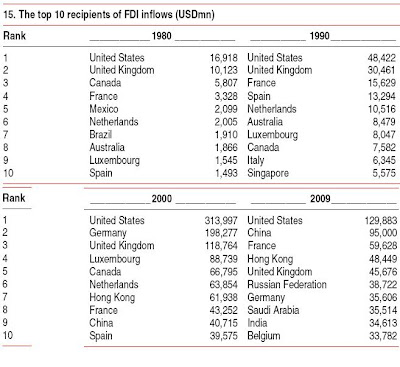 4) Predictions for continued long-run growth in China, India, Brazil, and elsewhere have a buried assumption that their growth will become far less dependent on the buying power of high-income countries, and instead far more dependent on growth generated internally or by trading with each other.

King writes: "Excluding the possibility of trading with Mars or Venus, there are two primary options: either more of each emerging nation’s growth comes from internal sources or more comes from the emerging nations connecting economically with each other. The developed world simply won’t be big enough to accommodate the emerging world’s ambitions and expectations."