I just clicked over to look up some numbers in the U.S. Statistical Abstract, which has been one of my standard starting points for fact-finding and fact-checking since I started needing to care about actual data as part of my high school debate team back in the 1970s. As it says at the website:  "The Statistical Abstract of the United States, published since 1878, is the authoritative and comprehensive summary of statistics on the social, political, and economic organization of the United States. Use the Abstract as a convenient volume for statistical reference, and as a guide to sources of more information both in print and on the Web."

It also says that the U.S. Census Bureau has decided to save $3 million per year by eliminating the Stat Abstract.

The invaluable Robert Samuelson at the Washington Post has been on top of this story, which I had utterly missed. He lamented the likely loss of the Stat Abstract in an August 21 column, and followed up with a sad blog post on October 4.  He writes: "I’ve been covering government for more than four decades, and this is one of the worst decisions I’ve seen." For those of us who spend large chunks of our time trying to track down actual facts, the end of a long-standing reference work is a genuinely grim day.

I found myself hoping that this this is just the Census Bureau's version of the infamous "Washington Monument strategy." Back in 1969, a director of the National Park Service named George Hartzog responded to proposed budget cuts for his agency by closing all the national parks for two days a week--including the Washington Monument. (A short biography of Hartzog is here.) Public outrage over these highly visible changes led Congress to restore the funding. Ever since then, when a government agency responds to a tightened budget by cutting its most publicly visible functions, it's been called a "Washington Monument" strategy.


But the Washington Monument strategy only works if the public cares, and when it comes to the Statistical Abstract, even I am not delusional enough to believe that it does.

What makes the elimination of the Stat Abstract even more annoying is that by government standards, it's dirt-cheap. Federal spending for 2012 is projected to be about $3.7 trillion. If I haven't slipped a decimal point in my calculations, this rate of spending works out to about $7 million per minute, 24 hours a day, 365 days per year. At $3 million, the Stat Abstract provides one-stop access to a vast range of statistics and sources, at a cost of less than a half-minute per year of federal spending. When you look at government websites, you see a vast array of cheery stories about how the government is there to help you, with photos of smiling people and shiny equipment. Government always seems to have money for public relations and self-promotion. But apparently not for offering the public a genuinely useful, if admittedly dry, collection of actual nonpartisan data in a volume with a history of more than 130 years.


For those of us who each year spend some time skimming through the Analytical Perspectives volume of the Federal Budget of the United States (welcome to my life!), there is always a section on "Strengthening Federal Statistics." Here's the opening paragraph:

"Federal statistical programs produce key information to illuminate public and private decisions on a range of topics, including the economy, the population, agriculture, crime, education, energy, the environment, health, science, and transportation. The share of budget resources spent on supporting Federal statistics is relatively
modest—about 0.04 percent of GDP in non-decennial census years and roughly double that in decennial census years—but that funding is leveraged to inform crucial decisions in a wide variety of spheres. The ability
of governments, businesses, and the general public to make appropriate decisions about budgets, employment, investments, taxes, and a host of other important matters depends critically on the ready availability of relevant, accurate, and timely Federal statistics."

Here's a table showing the main federal statistical agencies and their level of spending, in millions of dollars. The U.S. Census Bureau spent a lot in 2010, because of the Census, but is back to more normal levels by now. 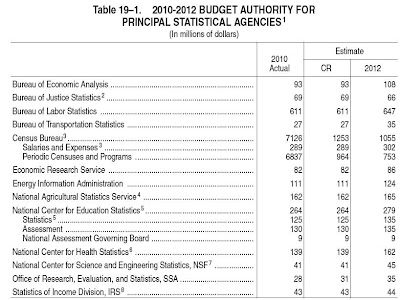 Can't a few Senators and Congressmen take time out from earmarking pork barrel projects for their home districts and raising campaign contributions, and resurrect the Statistical Abstract? It's a bad civics lesson to have this volume disappear.