Philip Turner asks "Is the long-term interest rate a policy victim, a policy variable or a policy lodestar? in a December 2011 working paper for the Bank of International Settlements.

Not all long ago, a number of papers tried to estimate the "normal" long-term real interest rate on safe assets. Estimates were typically in the range of 2-3%, which is a substantially higher than the barely-above zero percent rates of interest on safe borrowing, like 10-year U.S. bonds that pay an interest rate above the rate of  inflation.  Here's Turner: "There has been much debate among economists about the “normal” long-term interest rate. Hicks (1958) found that the yield on consols over 200 years had, in normal peacetime, been in the 3 to 3½% range. After examining the yield on consols from 1750 to 2006, Mills and Wood (2009) noted the remarkable stability of the real long-term interest rate in the UK – at about 2.9%. (The only exception was between 1915 and 1964, when it was about one percent lower). Amato’s (2005) estimate was that the long-run natural interest rate in the US was around 3% over the period 1965 to 2001 and that it varied between about 2½% and 3½%." [For the record, a "consol" is a kind of perpetual bond issued by the British government: that is, it paid interest but had no date of maturity.]

Here's a figure showing the U.S. federal funds rate, as well as yields on 10-year inflation-linked Treasuries in the U.S. and the UK: 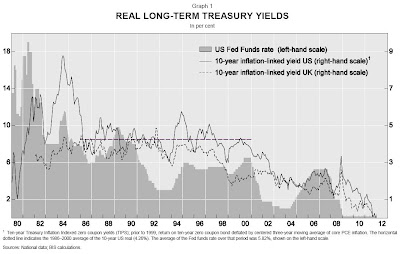 Turner sorts through the possibilities: Are these ultra-low interest rates a result of U.S. monetary policy? Are they a result of a "savings glut"--historically high rates of saving in the global economy, driven primary by the growing and high-saving economies of Asia, which drives down interest rate? Or are they the result of the ability of private financial markets to produce a huge supply of "safe" financial assets--although many of those assets then turned out not to be so safe.

My own sense is that although other explanations may have been more relevant a few years ago, longer-term interest rates now are low largely as a result of policy decisions, and that the "quantitative easing" policies in which central banks buy and hold government debt are a sign that such debt would not be sold at the same low interest rate without a policy intervention. However, as Turner rightly points out after a discussion of the relevant theory:  "This paper argues great caution is needed in drawing policy implications based on the real long-term interest rate currently prevailing in markets. This interest rate has moved in a wide range over the past 20 years. At present, it is clearly well below longstanding historical norms. Several explanations come to mind. But not enough is known about how far the long-term rate has been contaminated by government and other policies. Nor is the persistence of such effects clear. And the various policies will have impacted different parts of the yield curve in ways that are hard to quantify."

"From the mid-1950s to the early 1980s, this aggregate [debt of domestic US non-financial borrowers – governments, corporations and households] was remarkably stable – at about 130% of GDP. It was even described as the great constant of the US financial system. The subcomponents moved about quite a bit – for instance, with lower public sector debt being compensated by higher private debt. But the aggregate itself seemed very stable. During the 1980s, however, this stability ended. Aggregate debt rose to a new plateau of about 180% of GDP in the United States. At the time, this led to some consternation in policy circles about the burden of too much debt. It is now about 240% of GDP. Leverage thus measured – that is, as a ratio of debt to income – has increased. Very many observers worry about this. Whatever the worries, lower rates do make leveraged positions easier to finance. Once account has been taken of lower real interest rates, debt servicing costs currently are actually rather modest: Graph 3 illustrates this point."

Graph 3 shows nonfinancial debt in the U.S. economy as a share of GDP with the solid line, rising to aboug 240% of GDP as measured on the right-hand axis. It shows the falling real long-term Treasury yields as a measure of interest rates on the left-hand scale, with the thin dashed line. And it shows interest expenses as a share of GDP with the thick dashed line, measured on the left-hand axis. Notice that even thought debt is historically very high, interest payments are historically low." 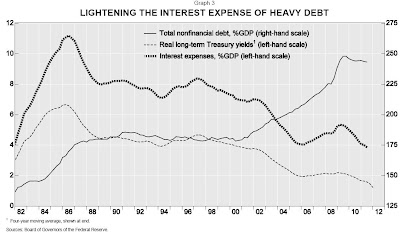 In this setting, an ever-larger share of private assets are locked into very low real returns. Institutions that have liabilities far into the future, like insurance companies and pension funds, suffer greatly when interest rates are so low. It becomes much easier for the federal government to finance its huge budget deficits with such low interest rates. The pressure on households and firms to reduce their borrowing and to save more is greatly reduced, too.

This combination of high debt and low interest rates creates a potentially unstable situation. If or when interest rates rise again, the oversized debt burdens will be tougher to finance. All of those who are locked into long-term low interest rates--including large financial institutions and the Federal Reserve--would see the value of those investments fall if higher interest rates become available. Turner concludes:

"The concluding note of caution is this: beware of the consequences of sudden movements in yields when long-term rates are very low. Accounting and regulatory changes may have made bond markets more cyclical. There is no evidence that bond yields have become less volatile in recent years. Indeed, data over the last decade or so mirror Mark Watson’s well-known finding that the variability of the long-term rate in the 1990s was actually greater than it had been in the 1965–78 period. A change of 48 basis points in one month ...  would have a larger impact when yields are 2% than when they are 6%. With government debt/GDP ratios set to be very high for years, there is a significant risk of instability in bond markets. Greater volatility in long-term rates may create awkward dilemmas in the setting of short-term rates and decisions on central bank holdings of government bonds. Because interest rate positions of financial firms are leveraged, sharp movements could also threaten financial stability."