The Consumer Price Index (CPI) from the Bureau of Labor Statistics is the measure of inflation that gets the most attention, both from the media and in most intro econ classrooms. But I'm thinking that the Personal Consumption Expenditures (PCE) index measure of inflation should start to get equal or perhaps even greater attention.

For starters, I hadn't known--although I probably should have known--that when the Federal Reserve looks at rates of inflation, it focuses more on PCE than on CPI. The announcement of this policy change was buried in a footnote in the Fed's  Monetary Policy Report to the Congress, February 17, 2000. There's some jargon in the quotation, which I'll unpack in a minute, but here's the comment:

"In past Monetary Policy Reports to the Congress, the FOMC [Fed Open Market Committee] has framed its inflation forecasts in terms of the consumer price index. The chain-type price index for PCE draws extensively on data from the consumer price index but, while not entirely free of measurement problems, has several advantages relative to the CPI. The PCE chain-type index is constructed from a formula that reflects the changing composition of spending and thereby avoids some of the upward bias associated with the fixed-weight nature of the CPI. In addition, the weights are based on a more comprehensive measure of expenditures. Finally, historical data used in the PCE price index can be revised to account for newly
available information and for improvements in measurement techniques, including those that affect source data from the CPI; the result is a more consistent series over time. This switch in presentation notwithstanding, the FOMC will continue to rely on a variety of aggregate price measures, as well as other information on prices and costs, in assessing the path of inflation."

So what is all this stuff about a "PCE chain-type index" compared to the "fixed weight nature of the CPI, and how the PCE is "a more comprehensive measure of expenditures," and how "historical data in the PCE price index can be revised? For explanations of these differences, Phil Davies of the Minneapolis Fed offers a nice discussion of the CPI and PCE, along with much description of how price indexes have evolved over time, in "Taking the Measure of Prices and Inflation," appearing in the December 2011 issue of the Region. For a FAQ page at the Bureau of Economic Analysis website comparing the CPI and PCE, look here. For a more detailed discussion of differences, see this article in the November 2007 Survey of Current Business.

As a starting point, here's a graph showing the difference between the CPI and the PCE, showing annual percentage changes in inflation according to each measure. Clearly, the difference between them isn't large. But just as clearly, the rate of inflation tends to be a little lower when using the PCE (the blue line is more often below the red than not(, and the rate of deflation in 2009 was a little smaller using the PCE, too. 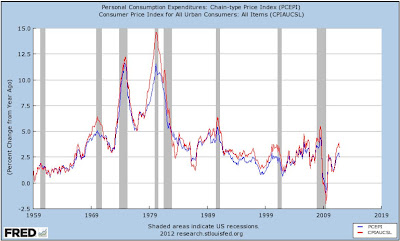 There are four ways in which PCE differs from the CPI. I'll use the names the BEA gives them:

1) The scope effect. The two indexes cover similar but not identical categories of personal spending. Here's Davies from the Minneapolis Fed: "[The PCE measures a broader swath of personal consumption than the CPI. For instance, the PCE captures expenditures by rural as well as urban consumers and includes spending by nonprofit institutions that serve households. And while the CPI records only out-of-pocket spending on health care by consumers, the PCE also tracks personal medical expenses paid by employers and federal programs such as Medicare. However, over 70 percent of the price data in the PCE is drawn from the CPI."

2) The weight effect. When combining all sorts of individual prices into an overall price index, those categories where people spend more get greater weight than those categories where people spend less. But the PCE and CPI  use different weights. Davies explains: "The CPI reflects reported consumption in the Consumer Expenditure Survey, conducted for the BLS by the U.S. Census Bureau. To determine its expenditure shares, the PCE relies on business surveys such as the Census Bureau’s annual and monthly retail
trade surveys. Shelter accounts for the biggest difference in weighting between the two indexes; the share of personal spending devoted to housing is larger in the CPI because nonshelter expenditures in the CES are less than those estimated from business surveys."

But as economists have long pointed out, this "basket of goods" approach oversimplifies in a way that surely overstates the true rise in the cost of living. There are two classic difficulties. One is that the basket of goods which represents consumption at the earlier time will not include newly created goods or improvements in the quality of goods that are available to people at the later time. Second, the basket of goods at the earlier time only made sense because it reflected prices at that time. Imagine that inflation was zero overall in a given year, but  prices shifted about so that people will naturally adjust their consumption , buying less of what is relatively more expensive and more of what is relatively cheaper. Thus, the basket of goods at the earlier time won't be a fair representation of what households would buy in a different configuration of prices at the later time.

There are at least partial solutions to these problems, but they increase the level of complexity in the calculation. For example, those who put together the "basket of goods" now rotate continuously what is included in the basket, so that as new goods are invented and old ones improved, they can enter the basket of goods being measured. In addition, they use mathematical formulas which take into account how people substitute between goods that relatively are more or less expensive, so that the pure effect of overall inflation in the price level can be separated out. While the CPI uses a mathematical formula that allows for some substitution in response to changes in relative prices (the "fixed weight" to which the Fed was referring in 2000), the PCE uses a formula that allows for a greater degree of substitution (the "chain-type index" to whih the Fed was referring in 2000).

4) Other effects.  There are some other minor differences in the CPI and PCE indexes, including how they do seasonal adjustments, how they treat airline fares, and some other issues.

Finally, one remaining difference between the CPI and the PCE is that the CPI, once published, is not revised. The CPI is used for contracts and for legislation--like adjusting Social Security benefits. The data series of the CPI over time was calculated using evolving methodologies,and when the way in which the CPI is calculated changes, no one goes back and recalculates historical CPI figures. The PCE is not tied up in such issues, and like the GDP estimates themselves, it is revised and altered over time, as adjustments are made to data and methods.  When the methods for calculating PCE are revised, these methods are then applied to all of the historical data as well, so that the PCE shows you a measure of how inflation affects personal expenditures over time, using a common methodology.