For What Majors Does College Pay Off?

Anthony P. Carnevale, Ban Cheah, and Jeff Strohl of the Georgetown Center on Education and the Workforce have published "Hard Times: College Majors, Unemployment, and Earnings."
The main focus of the report is to look at what people majored in in college, and then to compare unemployment and earnings between majors.  Before showing some highlights, two warnings are appropriate.

Second, the classic problem in thinking about benefits of education is to isolate cause and effect. The problem is that those who go on to get additional years of education may well be different in a number of ways: for example, they may have more persistence in their work habits, or they may come from a social background with higher expectations of educational achievement, or they may have higher intelligence in a way that makes it easier for them to perform well in school, or they may be better at deferred gratification, or they may have other personality types that flourish to  greater extent in an educational setting. Thus, when you see that, on average, people with a college degree have higher income than those with a high school degree, or that those who major in chemistry have higher income than those who major in English, it would be highly unwise to attribute all of the income gap just to what courses they took. If you could somehow transplant the characteristics of all the chemistry majors into English majors, and vice versa, the resulting income gaps might look quite a bit different. 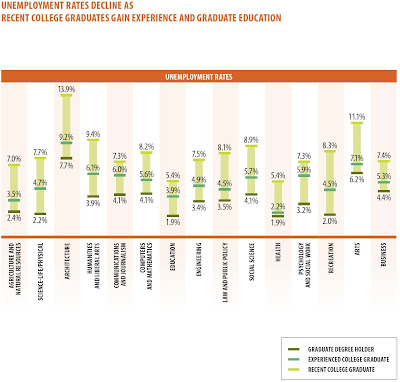 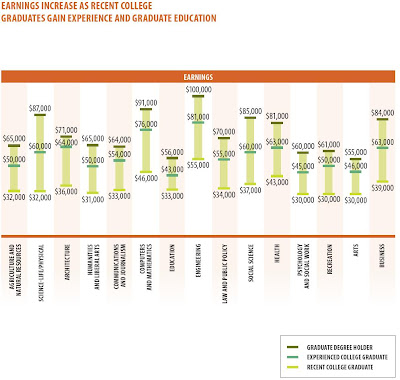 When it comes to income, the highest income levels are for those who majored engineering, computer science/mathematics, life sciences, social sciences, and business. The lower income went to those majoring in arts, education, and psychology/social work.