The Role of Safe Assets in a Financial System

Gary Gorton, Stefan Lewellen, and Andrew Metrick presented "The Safe-Asset Share," one of those rare academic papers with a basic empirical finding that shakes up your mental landscape,  at the annual meetings of the Allied Social Science Associations a couple of weeks ago in Chicago. Here is their opening (citations and footnotes omitted):

"Over the past sixty years, the total amount of assets in the United States economy has exploded, growing from approximately four times GDP in 1952 to more than ten times GDP at the end of 2010. Yet within this rapid increase in total assets lies a remarkable fact: the percentage of all assets that can be considered “safe” has remained very stable over time. Specifically, the percentage of all assets represented by the sum of U.S. government debt and by the safe component of private financial debt, which we call the “safe-asset share”, has remained close to 33 percent in every year since 1952."

The dynamics of the safe-asset share are important for economists, policymakers, and regulators to understand because “safe” debt plays a major role in facilitating trade. ... Most financial-sector debt has the primary feature that it is information-insensitive, that is, it is immune to adverse selection in trading because agents have no desire to acquire private information about the current health of the issuer. Treasuries, Agencies, and other forms of highly-rated government debt also have this feature. To the extent that debt is information-insensitive, it can be used efficiently as collateral in financial transactions, a role in finance that is analogous to the role of money in commerce. Thus, information-insensitive or “safe” debt is socially valuable. Importantly, the stability of the safe asset share implies that the demand for information-insensitive debt has been relatively constant as a fraction of the total assets in the economy. Given the rapid amount of change within the economy over the past sixty years, the relatively constant demand for safe debt suggests an underlying transactions technology that is not well understood." 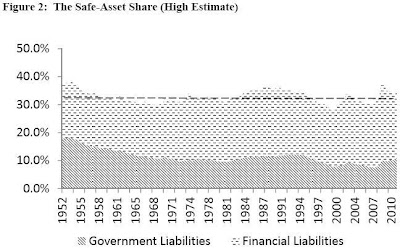 However, the composition of these safe assets has shifted dramatically in recent decades. It used to be mainly bank deposits, but it has now become mainly private securities. They write: "The figure shows that bank deposits were near 80 percent of the total through the 1950s and 1960s, and remained as high as 70 percent as late as 1978. This percentage then began a steep 30-year decline, with the rise of money market mutual funds, broker-deal commercial paper, securitized debt from GSEs, and other asset-backed securities. On the eve of the financial crisis, the share of bank deposits had fallen to 27 percent. At the end of 2010, it stood at a little less than 32 percent."

Having documented the pattern, they end their paper with more questions than answer: "[W]e currently know very little about the demand for and supply of “safe” debt. While we hope that our work is a start in the right direction, our paper raises a number of important questions. Why is the safe-asset share constant? Did the demand for safe assets play a role in the rise of the shadow banking system? What is the underlying transactions technology that relates the safe asset share to the rest of the economy? We hope that these and other questions regarding safe debt will be addressed through future research."

However, there is a bit more to say here. Gorton in particular has been thinking through the role of safe assets in an economy and a financial system for some time. For example, the subject came up in an interview he did with the Region magazine, published by the Federal Reserve Bank of Minneapolis in December 2010. Here's Gorton from that interview, on how a "safe asset" can be conceived of as an asset that is insensitive to information, and how when that an asset thought to be safe becomes sensitive to information, a financial crisis can result:

"Global financial crises are about debt. About debt. But, obviously, we need to have a theory of debt to understand why people would use a security, bank debt, and how that could lead to a crisis. ... In my work with Tri Vi Dang and Bengt Holmström, we develop this idea, that you mention, of the optimality of debt arising from its information insensitivity. Roughly speaking, the argument for the optimality of debt is simply that it’s easiest to trade if you’re sure that neither party knows anything about the payoff on the debt. ...


That intuitive logic applies to repo as well. Nobody wants to be given collateral that they have to worry about. And the mechanics of how repo works is exactly consistent with this. Firms that trade repo work in the following way: The repo traders come in in the morning, they have some coffee, they go to their desks, they start making calls, and in a large firm they’ve rolled $40 to $50 billion of repo in an hour and a half. Now, you can only do that if the depositors believe that the collateral has the feature that nobody has any private information about it. We can all just believe that it’s all AAA.

This is a feature of an economy that is fundamental. It is fundamental that you have these kinds of bank-created trading securities. And the fact that it’s fundamental and that you need these is not widely understood in economics.  ...

The way standard models deal with it is, I think, incorrect. A lot of macroeconomists think in terms of an amplification mechanism. So you imagine that a shock hits the economy. The question is: What magnifies that shock and makes it have a bigger effect than it would otherwise have? That way of thinking would suggest that we live in an economy where shocks hit regularly and they’re always amplified, but every once in a while, there’s a big enough shock … So, in this way of thinking, it’s the size of the shock that’s important. A “crisis” is a “big shock.”

I don’t think that’s what we observe in the world. We don’t see lots and lots of shocks being amplified. We see a few really big events in history: the recent crisis, the Great Depression, the panics of the 19th century. Those are more than a shock being amplified. There’s something else going on. I’d say it’s a regime switch—a dramatic change in the way the financial system is operating. This notion of a kind of regime switch, which happens when you go from debt that is information-insensitive to information-sensitive is different conceptually than an amplification mechanism."

In a post last June 17, I quoted Ricardo Caballero about "Demand for Safe Assets in an Financial Crisis." He argues that the world economy as a whole, with the rise of economies in Asia in particular, is suffering from a shortage of safe assets, that the financial sector tried to manufacture the desired safe assets out of mortgage-backed securities, and that when these assets were clearly seen to be not safe [Gorton would say they switched from being information-insensitive to being information-sensitive], the crisis erupted.

This story of how safe assets relate to the financial system and to the possibility of crisis is still being fleshed out. But to misquote Gertrude Stein, "There is a there there."