Social scientists sometimes say that "demography is destiny," which never seemed quite right to me. Yes, demography has powerful and often underestimated effects. It constrains and shapes the options available to society. But society also makes decisions about how to react to demographic forces, too. In that spirit, here are some of the population constraints that will be shaping and constraining global politics and economics in the next few decades, from World Population Prospects 2019 done by demographers at the United Nations. In particular, I'm drawing here from the World Population Prospects 2019: Highlights report (June 2019).


"The world’s population continues to grow, albeit at a slower pace than at any time since 1950, owing to reduced levels of fertility. From an estimated 7.7 billion people worldwide in 2019, the medium-variant projection indicates that the global population could grow to around 8.5 billion in 2030, 9.7 billion in 2050, and 10.9 billion in 2100." 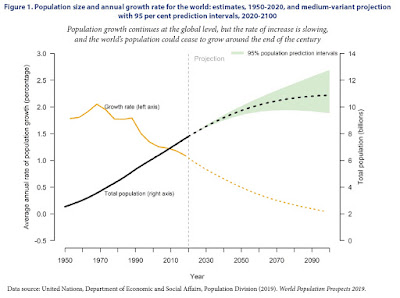 "Total fertility has fallen markedly over recent decades in many countries, such that today close to half of all people globally live in a country or area where lifetime fertility is below 2.1 live births per woman, which is roughly the level required for populations with low mortality to have a growth rate of zero in the long run. In 2019, fertility remains above this level, on average, in sub-Saharan Africa (4.6 live births per woman), Oceania excluding Australia and New Zealand (3.4), Northern Africa and Western Asia (2.9), and Central and Southern Asia (2.4). ..."

"Life expectancy at birth for the world’s  population reached 72.6 years in 2019, an improvement of more than 8 years since 1990. Further improvements in survival are projected to result in an average length of life globally of around 77.1 years in 2050. ..."

"With a projected addition of over one billion people, countries of sub-Saharan Africa could account for more than half of the growth of the world’s population between 2019 and 2050, and the region’s population is projected to continue growing through the end of the century. By contrast, populations in Eastern and South-Eastern Asia, Central and Southern Asia, Latin America and the Caribbean, and Europe and Northern America are projected to reach peak population size and to begin to decline before the end of this century. ..."

"More than half of the projected increase in the global population up to 2050 will be concentrated in just nine countries: the Democratic Republic of the Congo, Egypt, Ethiopia, India, Indonesia, Nigeria, Pakistan, the United Republic of Tanzania, and the United States of America." 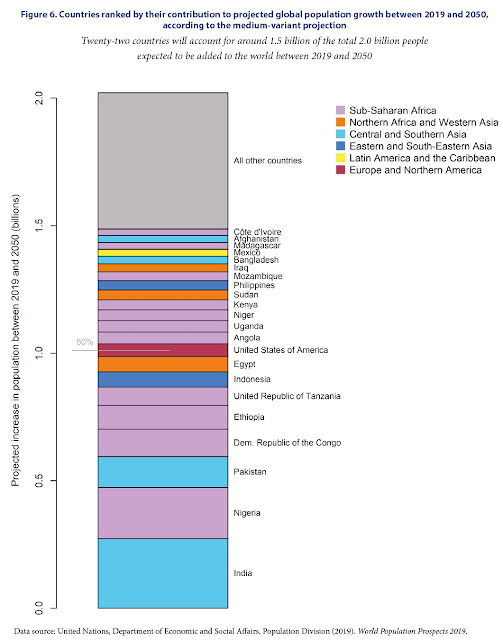 "Disparate population growth rates among the world’s largest countries will re-order their ranking by  size: for example, India is projected to surpass  China as the world’s most populous country around 2027." 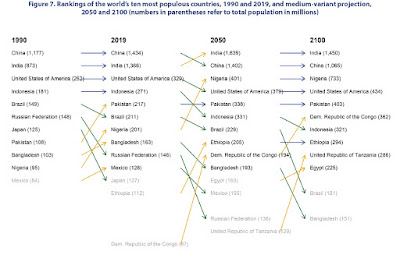