India has a population of more than 1.2 billion, more than one-sixth of world population. A coupole of decades ago, economic growth started surging in India. For example, the share of the population that was essentially destitute, below the Indian government's poverty line fell from 45% in 1994 to 37% by 2005 and 22% by 2012.  But in 2012 and 2013, this growth rate stumbled. Can India's growth rebound?

Forsome analysis of the issue, the OECD has published its Economic Survey of India 2014. The 55-page overview chapter can be downloaded for free on-line; thematic chapters on manufacturing, the economic status of women, and health care can be read online. In addition, the World Bank has published its Indian Development Update for October 2014. Here's a figure showing that while India's GDP growth in the last couple of decades hasn't quite been at Chinese levels, it has exceeded emerging-market countries like Brazil and Indonesia, and been streets ahead of the high-income OECD countries. 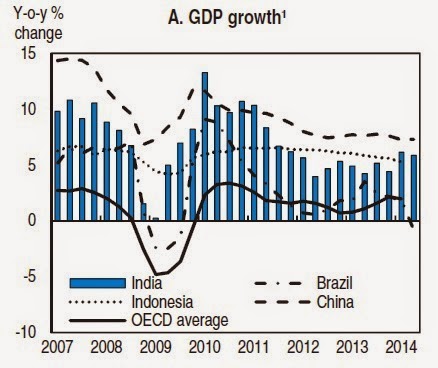 Here's an overview of India's economic situation from the OECD:

India experienced strong inclusive growth between 2003 and 2011, with average growth
above 8% and the incidence of poverty cut in half. This reflected gains from past
structural reforms, strong capital inflows up to 2007 and expansionary fiscal and
monetary policies since 2009. These growth engines faltered in 2012. Stubbornly high
inflation as well as large current and fiscal deficits left little room for monetary and fiscal
stimulus to revive growth. ...

In 2014, the economy has shown signs of a turnaround and imbalances have lessened.
Fiscal consolidation at the central government level has been accompanied by a decline in both inflation and the current account deficit. Confidence has been boosted by on-going reforms to the monetary policy framework, with more weight given to inflation. The large depreciation in the rupee has also helped revive exports. Industrial production has rebounded and business sentiment has surged, triggered by a decline in political uncertainty.  ...

Structural reforms would raise India’s economic growth. In their absence, however, growth will remain below the 8% growth rate achieved during the previous decade . Infrastructure bottlenecks, a cumbersome business environment, complex and distorting taxes, inadequate education and training, and outdated labour laws are increasingly impeding growth and job creation. Female economic participation remains exceptionally low, holding down incomes and resulting in severe gender inequalities. Although absolute poverty has declined, it remains high, and income inequality has in fact risen since the early 1990s. Inefficient subsidy programmes for food, energy and fertilisers
have increased steadily while public spending on health care and education has remained low.

For an encyclopedic overview of macro and micro issues for India, I commend your attention to the reports above. But here are three themes that caught my eye: inefficient subsidies, the need for labor law reform, and problems with the transportation grid.

Inefficient subsidies that don't much help the poor

Like many countries of all income levels, India subsidizes certain goods at considerable cost. The value of the subsidies to food, energy, and the like mainly flow to the middle class, not the poor. The OECD notes: "For rice and wheat, leakages in the food subsidy, including widespread diversion to the black market, have been estimated by Gulati et al. (2012) at 40%, and up to 55% by Jha and
Ramaswami (2011). According to Jha and Ramaswami (2011), the poor benefit from only around 10% of the spending on food subsidy. ...  For oil, Anand et al. (2013) estimated that the implicit subsidy is 7 times higher for the richest 10% of households than for the poorest 10%." The energy subsidies in particular are likely to be lower in the next few years because of lower global oil prices. But here's a figure showing the cost of these subsidies for food, fertilizer, and oil--India is encouraging the better off to burn fossil fuels while skimping on government provision of health care. 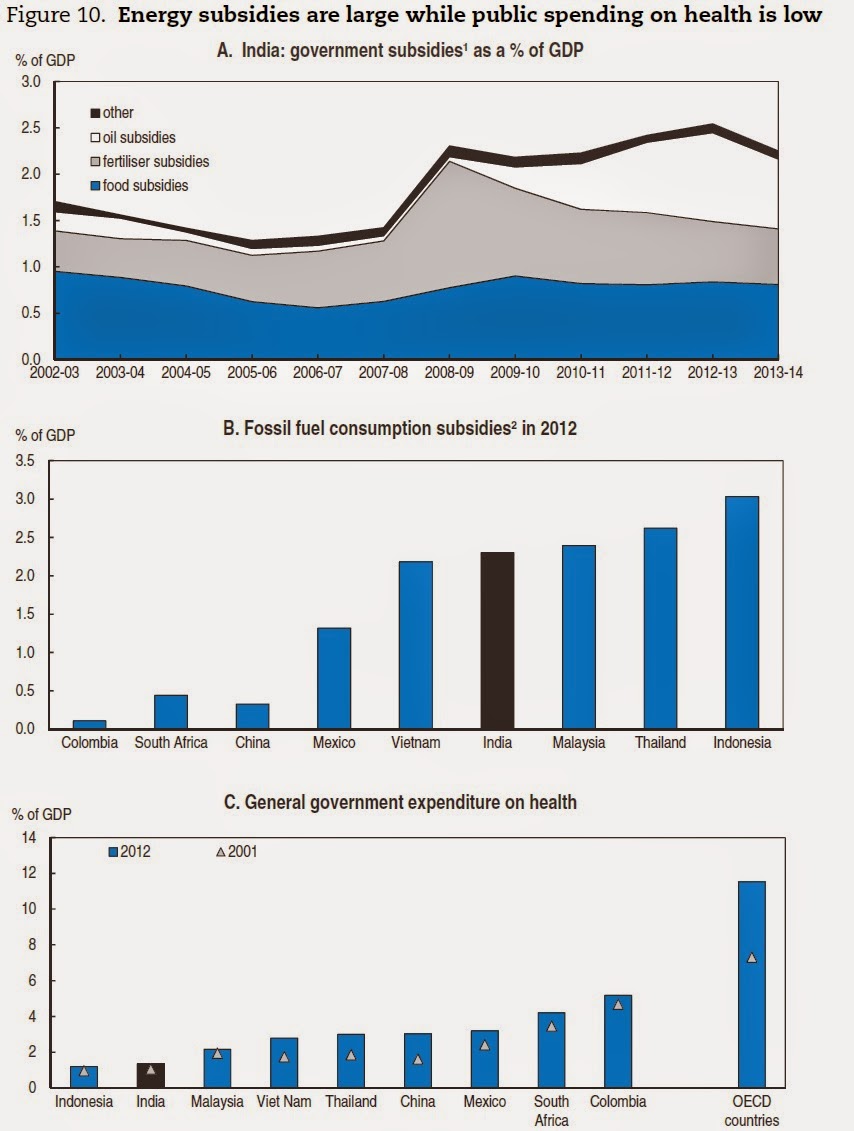 A need for reform of labor laws

India has a problem with overly restrictive labor laws. The OECD puts together an index with a bunch of measures of how protected workers are. On a scale from 0-6, the U.S. measures about 0.5; the measure for the high-income OECD countries is roughly 2;  and the measure for India exceeds 3. Many of these rules only apply to firms that hire more than a certain number of people, like 10 or 100. As a result, firms in India hesitate to grow, relying instead on networks of tiny firms and temporary workers. The OECD explains:


The vast majority of workers, particularly those in agriculture and the service sector, are not covered by core labour laws. In manufacturing, NSSO data suggest that about 65% of jobs were in firms with less than 10 employees in 2012 (Mehrotra et al., 2014) – the so-called “unorganised sector” – and thus not covered by Employment protection legislation (EPL) and many other core labour laws which apply only to larger firms.In addition, the Annual Survey of Industries (ASI) reveals that of those working in the organised manufacturing sector (more than 10 employees) 13% were on temporary
contracts or employed by a sub-contractor (“contract labour”) in 2010, up from 8% in 2000. Contract workers are also not covered by key employment or social protection regulations. ... A comprehensive labour law to consolidate, modernise and simplify existing regulations would allow firms to expand employment and output, and would be more enforceable, thereby extending social protection to more workers. One option would be to create a labour contract for new permanent jobs with less stringent employment protection legislation but with basic rights – standard hours of work, holidays, minimum safety standards and maternity benefits – for all workers irrespective of the firm size.

A need to improve the transportation system
The World Bank points out that transporting goods across India is time-consuming for all kinds of reasons, in a way that hinders economic coordination and growth. In its discussion of truck transportation (although rail and port shipping have similar issues), the report notes:

Road traffic accounts for about 60 percent of all freight traffic in India. Yet, the average speed of a truck on a highway is reported to be just 20-40 km/hour and trucks travel on average 250-300 km per day (compared to 450 km in Brazil and 800 km in the United States). Road conditions play a role in the slow pace of movement of goods, as does the generally poor condition of vehicles. Over one-third of trucks in India are more than 10 years old ...

Besides road quality, the next most frequently cited causes for freight delays are customs inefficiencies and state border check-post clearances. A number of studies in the last few years have found that for up to 60 percent of journey time, the truck is not moving. Approximately 15-20 percent of the total journey time is made up of rest and meals; another around 15 percent at toll plazas; and the balance, roughly a quarter of the journey time, is spent at check posts, state borders, city entrances, and other regulatory stoppages. ...

Over 650 checkpoints slow freight traffic at state borders. The checkpoints are tasked primarily with reconciliation of central versus state sales taxes in one state with those in the other, as well as checking for road permits and associated road tax compliance, collecting and checking for other local taxes, clearances, as well as checks for and imposition of taxes on or prohibition of the movement of specific types of goods, such as alcoholic products (for state excise taxes) and mineral products (for royalties). ...
The potential gains of more efficient and reliable supply chains are enormous. Simply halving the delays due to road blocks, tolls and other stoppages could cut freight times by some 20-30 percent, and logistics costs by even more, as much as 30-40 percent. This would be tantamount to a gain in competitiveness of some 3-4 percent of net sales for key manufacturing sectors ...

India has enormous potential for economic growth. As someone commented a few years back, the country is "half southern California, half sub-Saharan Africa." Every country has political and social barriers that can lead to rules and regulations that limit economic growth, but India seems to have more than its fair share of such obstacles--which is in part why the gains from reducing these obstacles can be so large.

For a previous look at this topic, see "India's Economic Growth: Issues, Puzzles, Sustainability" from January 3, 2012.
Posted by Timothy Taylor at 7:00 AM