The reason that the United Nations voted last year to designate November 19 as World Toilet Day is because the first World Toilet Summit began on that day in 2001, and that day is also the start of the World Toilet Organization. Out of the global population of 7 billion, about 1 billion people defecate in the open, with about 600 million of those people living in India. According to the World Health Organization and UNICEF, there are 19 countries in the world where more than half the rural population still practices open defecation. 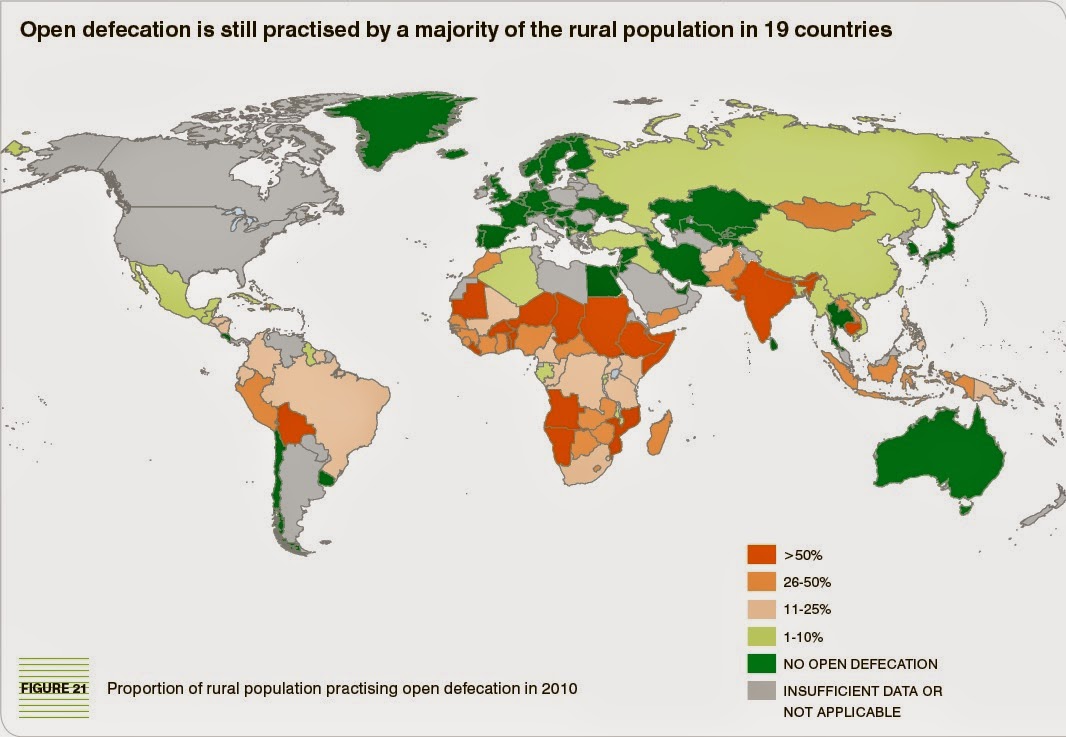 Especially in areas with relatively dense populations, this practice has health consequences. It's difficult to separate the effects of lacking toilets from other issues of unsafe water supplies. But the World Toilet Organization says that the lack of toilets causes an average of 1,000 child deaths each day due to diarrhea, and other estimates refer to stunted growth and prevalence of infections like typhoid from fecal-borne diseases. There is also an issue of violence against women and girls perpetrated when they lack a private and secure place to defecate.

Part of the answer here is just to build more toilets: indeed, India announced a program this summer for building millions of toilets in a few months--at an average pace of about one per second. But the research in this area also suggests the importance of altering social norms about sanitation and the water supply. A much-discussed program here is “Community-Led Total Sanitation” (CLTS), which seeks to involve the community in construction and maintenance of sanitation facilities, as well as changing past practices where needed. Some links to research are available at the CLTS website. For examples of research in this area, here's a study of experience in Indonesia, in East Java, and preliminary results from a four-country comparison study of India, Indonesia, Mali, and Tanzania.

Talking about toilets can feel uncomfortable, and the discussion can quickly lose its policy focus. In the bulk of this post, I have manfully avoided referring to Sir Thomas Crapper, who greatly improved and popularized the flush toilet in the 19th century. I have not discussed the We Can't Wait promotions or the dancing turds ads in India. I have sidestepped whether toilet policy should be pursued through a bottom-up or top-down approach. In this case, as in so many others, the easy giggle can too often be a way of minimizing a real public health challenge.