Twenty years ago, when the Federal Reserve Open Market Committee wanted to change interest rates, it didn't make any announcement. It just took action, and market participants observe those actions. Mark Wynne of the Federal Reserve Bank of Dallas explains in “A Short History of FOMC Communication”:

The first time the FOMC issued a statement immediately after a meeting explaining what action had been decided was on Feb. 4, 1994. That statement simply noted that the committee decided to “increase slightly the degree of pressure on reserve positions” and that this was “expected to be associated with a small increase in short-term money market interest rates.” By way of explanation for why the committee was announcing its decision, the statement said that this was being done “to avoid any misunderstanding of the committee’s purposes, given the fact that this is the first firming of
reserve market conditions by the committee since early 1989.” In February 1995, the committee decided that all changes in the stance of monetary policy would be announced after the meeting.

But over the years, these announcements of Fed policy have become longer and more complex. Rubén Hernández-Murillo and Hannah Shell of the Federal Reserve Bank of Cleveland have created a vivid figure to show the change in "The Rising Complexity of the FOMC Statement." The colors of the circles show who was leading the Fed at the time: blue for Greenspan, red for Bernanke, and green for Yellen. The area of the circle shows the number of words in the statement: clearly, the statements have been getting wordier over time. And on the vertical axis, the FOMC statements were run through a standard diagnostic tool for determining their "reading grade level." In short, the statement back in the mid-1990s were often pitched at about a 12th grade level. But over time, and especially after the financial crisis hit, the FOMC statements ratcheted up to a "19th grade" level, which is to say that they were pitched at readers with post-college graduate study. 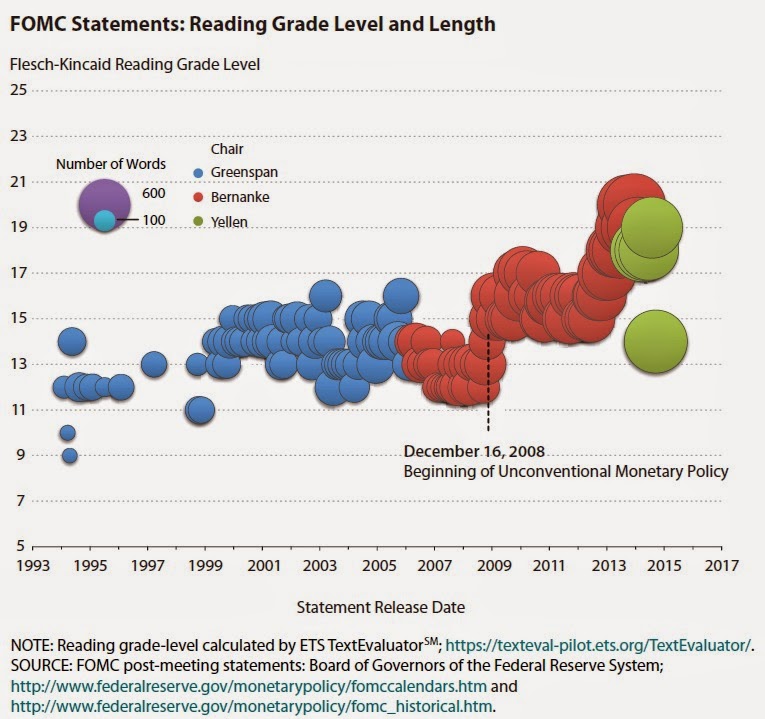 This trend raises a question last spotted among the "advice to the lovelorn" columnists: Is communication better if it is longer and more complex? As an editor, I confess that I'm suspicious of length and complexity. A wise economist friend used to point out to me that in academia, specialized terminology always serves two purposes: it streamlines and simplifies communication among specialists, and it shuts out nonspecialists. Of course, all academics like to believe that we are only using specialized terminology for the loftiest of intellectual purposes, not because we are as much of an in-group as an set of gossiping teenagers, with our own slang devised to define membership in the group and to separate ourselves from others.

But even my cynical side remembers a fundamental rule of exposition often attributed to Albert Einstein is that "Everything should be made as simple as possible, but not simpler."

In December 2012, as Wynne points out, the Fed altered its communication substantially by saying that “this exceptionally low range for the federal funds rate will be appropriate at least as long as the unemployment rate remains above 6½ percent, inflation between one and two years ahead is projected to be no more than a half percentage point above the committee’s 2 percent longer-run goal and longer-term inflation expectations continue to be well anchored.” In other words, the Fed for the first time had announced that it would keep interest rates at a certain level until a certain economic statistic--the unemployment rate--had moved in a certain way. But then when the unemployment rate fell beneath 6.5% in April 2014, this earlier statement had led to expectations that the Fed would then start raising interest rates, which as it turned out, the Fed wasn't yet quite ready to do.

How the Federal Reserve and other major central banks carry out their policies has been fundamentally transformed during the last six years. Explaining these changes is important. But if the explanations are pitched at a level that only makes sense to PhD economists, they aren't much help. And as the personal advice columnists remind us, if someone is talking and talking but not giving you a straight answer that you can understand, you have some reason to mistrust whether they know their own mind--and even whether they are really trying to tell you the truth. I'll give the last word here to Hernández-Murillo and Shell:


As the Fed returns to using conventional monetary policy tools, it is likely that the reading levels of its statements will decline. However, if the Fed continues to use unconventional instruments for a considerable period, it may need to consider how to explain its policy actions in simpler terms to avoid volatility in financial markets.