Consider two approaches to encouraging those with low skills to be fully engaged in the workplace. The American approach focuses on keeping tax rates low and thus providing a greater financial incentive for people to take jobs. The Scandinavian approach focuses on providing a broad range of day care, education, and other services to support working families, but then imposes high tax rates to pay for it all. In the most recent issue of the Journal of Economic Perspectives, Henrik Jacobsen Kleven contrasts these two models in "How Can Scandinavians Tax So Much?" (28:4, 77-98). Kleven is from Denmark, so perhaps his conclusion is predictable. But the analysis along the way is intriguing.

As a starting point, consider what Kleven calls the "participation tax rate." When an average worker in a country takes a job, how much will the money they earn increase their standard of living? The answer will depend on two factors: any taxes imposed on what they earn, including, income, payroll, and sales taxes; and also the loss of any government benefits for which they become less eligible or ineligible because they are working. In the Scandinavian countries of Denmark, Norway, and Sweden, this "participation tax rate" is about double what it is in the United States. Here's Kleven:


The contrast is even more striking when considering the so-called “participation tax rate,” which is the effective average tax rate on labor force participation when accounting for the distortions due to income taxes, payroll taxes, consumption taxes, and means-tested transfers. This tax rate is around 80 percent in the Scandinavian countries, implying that an average worker entering employment will be able to increase consumption by only 20 percent of earned income due to the combined effect of higher taxes and lower transfers. By contrast, the average worker in the United States gets to keep 63 percent of earnings when accounting for the full effect of the tax and welfare system.

A standard American-style prediction would be that countries where gains from working are so low should see a lower level of participation in the workforce. That prediction does not hold true in cross-country data among high-income countries. Here's a figure from Kleven's paper: Notice that the Scandinavian countries have among the highest participation tax rates, but also have among the highest employment rates in the age 20-59 population, both overall and for females. Correlation isn't causation, as the econometricians love to chant, but it's still intriguing that overall pattern across countries is that a higher participation tax rates is correlated with a higher employment rate--the opposite of what one might expect. 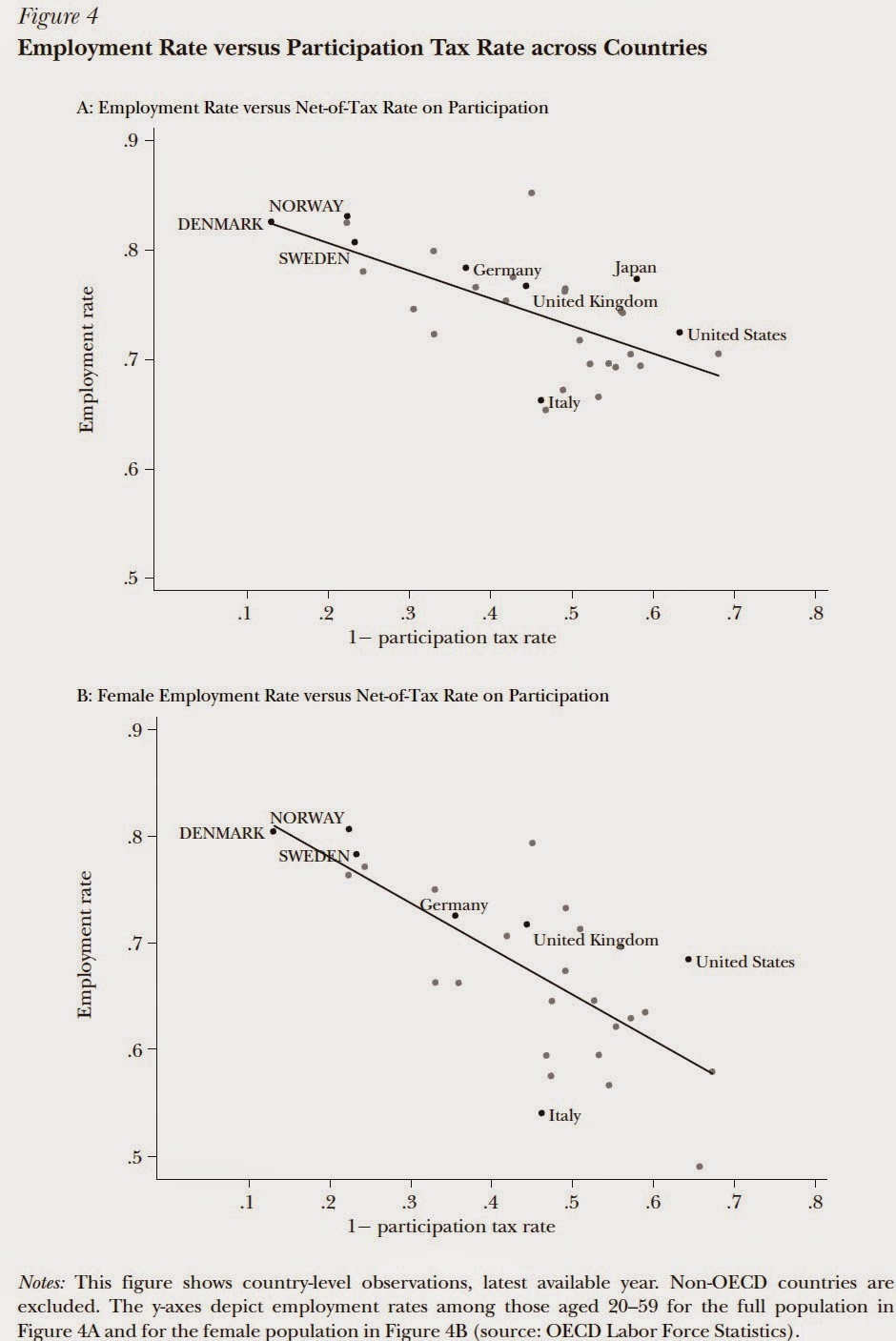 What explains this pattern? Kleven argues that just looking at the tax rate isn't enough, because it also matters what the tax revenue is spent on. For example, the Scandinavian countries spend a lot of money on universal programs for preschool, child care, and elderly care. Kleven calls these "participation subsidies," because they make it easier for people to work--especially for people who otherwise would need to find a way to cover or pay for child care or elder care. The programs are universal, which means that their value expressed as a share of income earned means much more to a low- or middle-income family than to a high-income family. Here's Kleven:


“[P]articipation subsidies” [are] due to public spending on the provision of child care, preschool, and elderly care. Even though these programs are typically universal (and therefore available to both working and nonworking families), they effectively subsidize labor supply by lowering the prices of goods that are complementary to working. That is, working families have greater need for support in taking care of their young children or elderly parents, and so demand more of those services other things equal. From this perspective, the cross-country correlations shown in Figure 5 have the expected sign; higher public support for preschool, child care, and elder care is positively associated with the rate of employment. Moreover, the Scandinavian countries are strong outliers as they spend more on such participation subsidies (about 6 percent of aggregate labor income) than any other country." 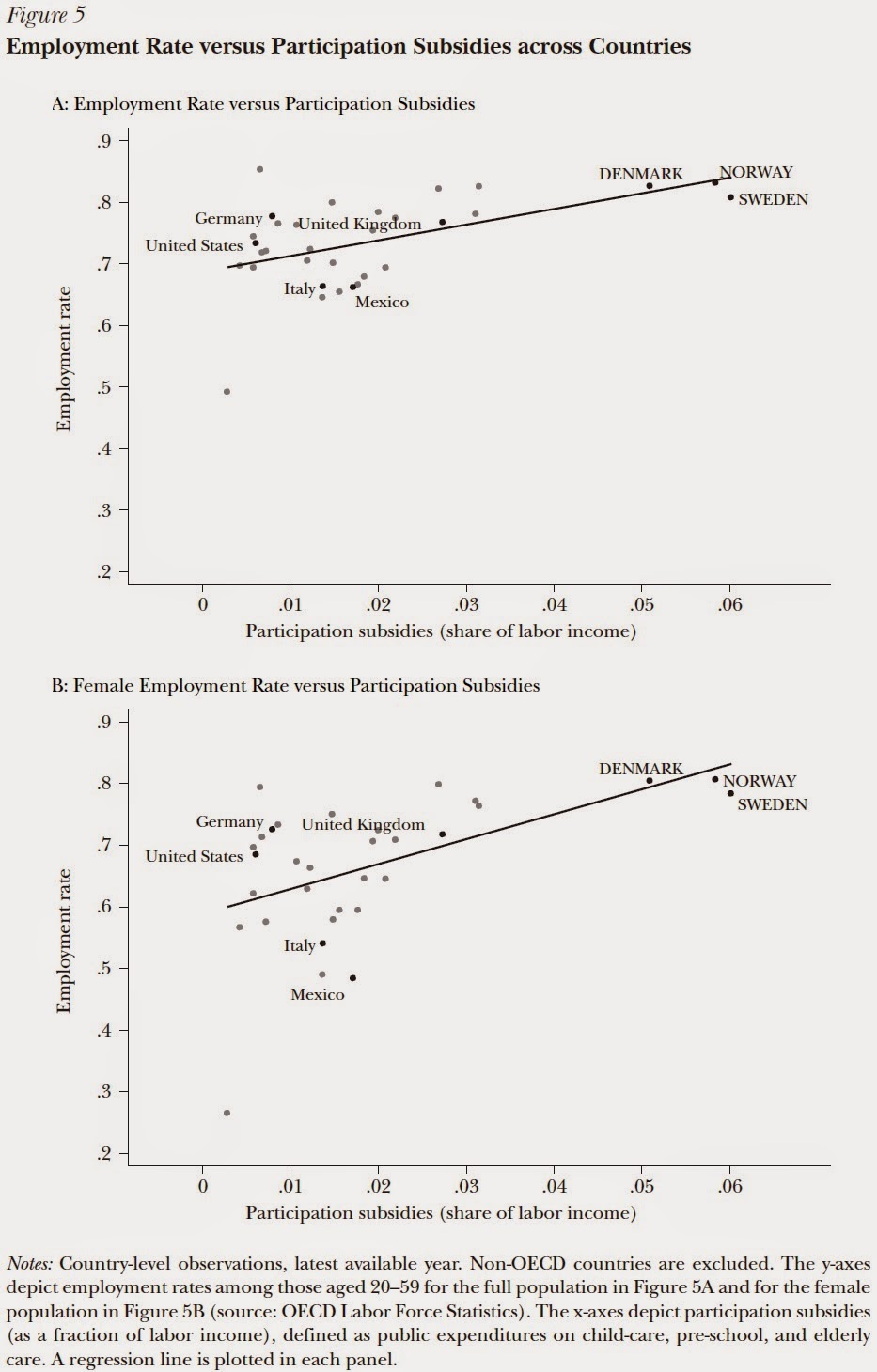 Any direct comparisons between the United States (population of 316 million) and the Scandinavian countries of Denmark (6 million), Norway,  (5 million) and Sweden (10 million) is of course fraught with peril. Their history, politics, economies, and institutions differ in so many ways. You can't just pick up can't just pick up long-standing policies or institutions in one country, plunk them down in another country, and expect them to work the same way.

That said, Kleven basic conceptual point seems sound. Provision of good-quality preschool, child care and elder care does make it easier for all families, but especially low-income  families with children, to participate in the labor market.   In these three Scandinavian countries, the power of these programs to encourage labor force participation seems to overcome the work disincentives that arise in financing and operating them. This argument has nothing to do with whether preschool and child care programs might help some children to perform better in school--although if they do work in that way, it would strengthen the case for taking this approach.

So here is a hard but intriguing hypothetical question: The U.S. government spends something like $60 billion per year on the Earned Income Tax Credit, which is a refundable tax credit providing income mainly to low-income families with children, and almost as much on the refundable child tax credit. Would low-income families with children be better off, and more attached to the workforce, if a sizeable portion of the 100 billion-plus spent for these tax credits--and aimed at providing financial incentives to work--was instead directed toward universal programs of preschool, child care, and elder care?
Posted by Timothy Taylor at 9:00 AM