In a series of television ads for Ameriprise, spokeman Tommy Lee Jones asks some version of the question: "Retirement. Will You Outlive Your Money?"  Katharine G. Abraham and Benjamin H. Harris tackle various aspects of this question in a November 6 research paper from the Economic Studies group at the Brookings Institution: "Better Financial Security in Retirement? Realizing the Promise of Longevity Annuities."

If everyone knew precisely how long they were going to live, along with what expenses needed to be incurred along the way, retirement planning would be considerably easier. But a lot of Americans seem underestimate how long they will live. A survey done back in 1991-92 asked Americans who at that time were aged 58-61 what percentage chance they had of living to age 75. Enough time has now passed that we know how many actually lived to age 75. For example, the table below shows that of those who said they had a 0% chance of living to age 75, 49.2% did actually live to age 75, as did 59.9% of those who thought they had a 10% chance of reaching 75, and 64.6% of those who thought they had a 20% chance of reaching 75. Again, this survey wasn't asking 20 year-olds or 30 year-old, but was asking people who were around age 60--and who presumably knew something about their health status. 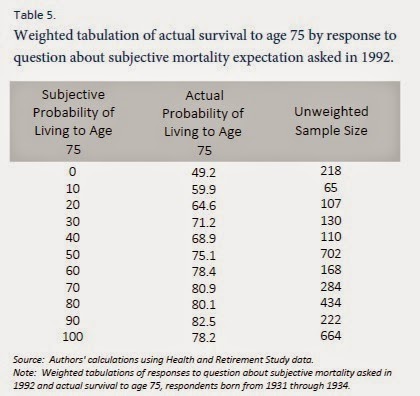 Annuities are the straightforward financial tool that provides insurance against running out of money before the end of life: basically, you pay for the annuity up front, and then the company guarantees you a stream of payments for the rest of your life.

But many people don't like the idea of annuities, for a variety of reasons. Many people don't like the idea that they will buy an annuity and then die sooner than expected, thus "losing money" on the annuity. (Of course, it is an unavoidable reality of insurance that people should be happy if they pay for the insurance year after year, but end up never needing to use it because they don't have the accident or problem for which they bought insurance in the first place. But most people dislike this aspect of insurance.) Other people fear that they might need to make a large expense in the future, perhaps for health care or to help a family member, and if they have annuitized a large share of their retirement wealth they would lose that flexibility. Some may figure that they already have an life-long annuity, in the form of Social Security, so they don't wish to put any more of their wealth into annuity form. Some people fear, with reason, that the markets for annuities in the past didn't always offer that good a deal in terms of what it cost to guarantee a certain stream of income in the future, so that they would rather sit down with a financial adviser and plan their own path for spending.

For an in-depth discussion of these issues, I recommend an essay on "Annuitization Puzzles"  by Shlomo Benartzi, Alessandro Previtero and Richard H. Thaler in the Fall 2011 issue of the Journal of Economic Perspectives. (Full disclosure: I've been Managing Editor of the JEP since 1987, so I am predisposed to think the articles are of consuming interest.) These authors argue that many people do very much like annuities. For example, Social Security is an annuity program, and it is quite popular. Most of the people who are currently receiving a "defined benefit" pension plan that pays a steady amount for the rest of their lives are not eager to switch over to a "defined contribution" plan where they would need to manage their own wealth. They argue that the lack of annuity purchasing is due more to the decision-making hurdles that face people who are thinking about buying annuities. They write: "An annuity should be viewed as a risk-reducing strategy, but it is instead often considered a gamble: “Will I live long enough for this to pay off?”" 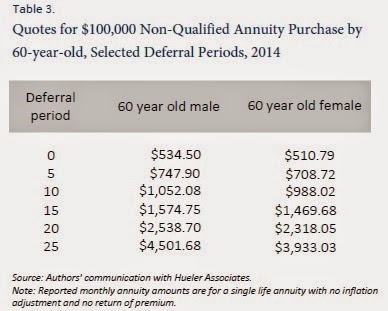 The potential benefit of longevity annuities is that they are truly insurance against outliving your assets, by offering a relatively large payoff if you live to a longer age than you expect. For example, a person could buy a longevity annuity that is set to kick in at age 80 or 85, and then figure that they can pretty much spend the rest of their wealth before that age, secure in the knowledge that they have a backstop in place if they live longer than expected. The tradeoff, like all insurance policies, is that if you don't reach the age where the longevity annuity kicks in, your money ends up being paid to someone else who lived longer than expected.

The market for longevity annuities is growing, but is still small. Abraham and Harris write:


"While the market for deferred-income annuities (DIAs) has blossomed in recent years, many DIAs are sold to individuals in their 50s and almost all are sold with deferral periods of less than 15 years. The current market for true longevity annuities remains
very thin. ... After managing just $50 million in sales a few years earlier, deferred income annuities reached $2 billion in sales in 2013. ... One risk that a standard longevity annuity contract does not address is inflation risk. ... [W]e are not aware of any currently offered longevity annuity product that includes an inflation protection option ..."

With the spread of 401(k) and IRA and other tax-deferred retirement accounts in recent decades, more and more people are going to face the question of whether to buy annuities in the future. Abraham and Harris look at the distribution of funds that people have in these kinds of accounts. They find that the bottom half or so little or nothing saved in a defined contribution account--in part becasue many of them don't have such an account in the first place. But among those in the 55-64 age bracket, the top 25% have $143,000 or more in such an account, and the top 10% have $463,000 or more in such an account.

Annuities may turn out to be one of those products that people don't like to buy, but after they have taken the plunge, they are glad that they brought. One can imagine an option where some degree of annuitization of wealth could be built into 401(k) and IRA accounts. For example, it might be that the default option is that 30% of what goes into your 401(k) or IRA goes to a regular annuity that kicks in when you retire, another 20% goes to a longevity annuity that kicks in at age 80, and the other 50% is treated like a current retirement account, where you can access the money pretty much as you desire after retirement. If you wanted to alter those defaults, you could do so. But experience teaches that many people would stick with the default options, just out of sheer inertia--and that many of them would be glad to have some additional annuity income after retirement.