Every basic exposition of how monetary policy is conducted before about 2008 is soon to become obsolete. The three basic monetary policy tools that used to be taught in almost every introductory economics course were changing reserve requirements, changing the discount rate, and conducting open market operations. Because of the way in which monetary policy was conducted during the Great Recession, all three tools have become essentially irrelevant. In the future, The Federal Reserve will mainly influence interest rates through two quite different tools that didn't even exist before 2008: primarily by using the rate of interest that it chooses to pay on bank reserves, and secondarily using its new reverse repo facility.

There's no secret about these new tools.  For example, here's an explanation from September 16-17 meeting of Federal Open Market Committee:
Let's do a quick review of the old monetary policy tools, explain why they no longer work, and then introduce the new monetary policy tools.

1) The central bank could alter the reserve requirement, which meant that banks had either more or less to lend than before.

2) If a bank reached the end of a business day and found that the last round of transactions had left it a little short of what it needed to be holding, one option was to borrow the additional funds from the central bank. When doing so, the bank would need to pay an interest rate called the discount rate. So by raising or lowering the discount rate, the central bank could influence whether a bank kept a fairly small or fairly large cushion of reserves over and above the required amount--and thus affect the bank's willingness to lend.

3) However, banks usually preferred not to borrow from the central bank, because doing so was often viewed as a danger signal that no other private bank was willing to lend to you. Instead, banks that were running a little short of reserves at the end of the day's transactions borrowed overnight from other banks and paid the so-called "federal funds interest rate." The Federal Reserve treated this federal fund interest rate as a target for monetary policy. It would buy or sell government bonds to set the federal funds interest rate at a desired level.

For example, here's  a figure (from the ever-useful FRED website run by the Federal Reserve Bank of St. Louis) showing the federal funds rate over time. You can tell the history of monetary policy back a half-century by the Fed reducing this federal funds rate in recessions (the gray bars) and increasing it when recessions were over and inflation seemed at least a potential threat.  You can also see how the Fed took this interst rate to near-zero during the Great Recession, and has held it there ever since, which is why there has been a need to use quantitative easing and forward guidance as tools of monetary policy since then.

Notice that all three of these traditional tools of monetary policy  rely in one way or another on banks being fairly close to the level of required reserves. However, as part of its "quantitative easing" response to the financial crisis, the Fed started buying large quantities of government debt and mortgage-backed securities. Instead of holding these bonds and securities, banks found that they were holding very large quantities of cash reserves, far above the legally required level. To be specific, U.S. banks were legally required to be holding $101 billion in reserves as of October 29, but they were actually holding $2,557 billion in reserves--about 25 times the required amount.

But when banks are holding large quantities of extra reserves, the old-style monetary policies don't work. Change the reserve requirement? Reducing it won't matter, and unless the central bank raises it by a multiple of 25, raising doesn't matter either. Also, no one wants to try to lock up these excess bank reserves, because the hope is that banks will find ways to lend this money. Altering the discount rate has no effect if banks don't need to borrow from the central bank, because there is no danger they will run short of reserves. And banks don't need to borrow much from each other at the federal funds interest rate, either, again because they are holding such high levels of reserves. Indeed, the quantity loaned and borrowed at the federal funds interest rate has dropped dramatically in recent years, as shown in this figure from economists at the Federal Reserve Bank of New York. 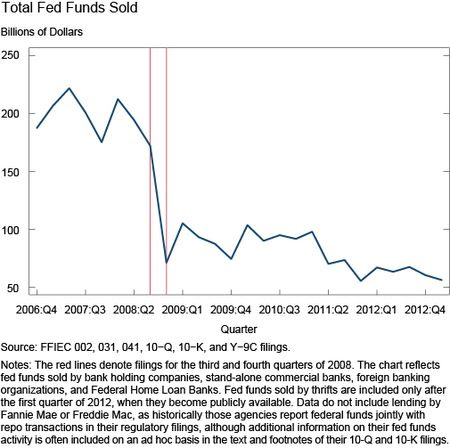 The situation of banks holding vastly more reserves than legally required, as a result of the quantitative easing policies of the Fed, seems likely to persist for years to come. So when the Federal Reserve decides that it wishes to raise the federal funds interest rate, what monetary policy tools will work in this situation?

The main monetary policy tool of the future is likely to be the amount of interest that the Fed pays on these bank reserves. Traditionally, the Fed paid zero percent interest on bank reserves. But a law passed in 2006 authorized the Fed to start paying interest on reserves as of 2011, and the Emergency Economic Stabilization Act of 2008 allowed the Fed to start paying interest on bank reserves as of October 1, 2008. The current interest rate paid by the Federal Reserve to banks on their excess reserves is 0.25 percent. By altering this interest rate, the Federal Reserve has a tool that can directly affect how much banks want to hold in reserves and how much they are willing to lend and at what interest rates. For example, say that the Fed gradually raised the interest rate it is paying on bank excess reserves. In that case, banks would be more likely to hold funds in the form of reserves with the central bank and less likely to make loans, including making overnight loans to each other in the federal funds market, which should tend to push up interest rates. In short, when the Fed decides that it's time to raise interest rates, the policy tool you should be watching is the interest rate charged on bank reserves.

What if this new policy tool doesn't work well? The back-up monetary policy tool, as the Fed said in the quotation above, is the "overnight reverse repurchase agreement facility," which will be used "only to the extent necessary and will phase it out when it is no longer needed to help control the federal funds rate."

Some definition of terms for those uninitiated in repurchase markets may be useful here. In a "repurchase agreement," one party sells a security to another, while simultaneously agreeing to repurchase it at a slightly higher price in the near future--often the next day. For the other party, the one which is agreeing to buy a security and then sell it back the next day, this is called a "reverse repurchase" or reverse repo agreement. The Fed is has been testing its ability to operate in the  repurchase market since September 2013, first selling and then buying back Treasury securities. Here's a description of reverse repurchase agreements from the Federal Reserve Bank of New York, which would be conducting these operations.

A reverse repurchase agreement, also called a “reverse repo” or “RRP,” is an open market operation in which the Desk [the New York Fed trading desk] sells a security to an eligible RRP counterparty with an agreement to repurchase that same security at a specified price at a specific time in the future. The difference between the sale price and the repurchase price, together with the length of time between the sale and purchase, implies a rate of interest paid by the Federal Reserve on the cash invested by the RRP counterparty.

For policy purposes, the key point here is the last sentence: a repurchase agreement is really a form of very short-term lending and borrowing. Investors who have a lot of cash are always looking for a chance to earn a return, even a small return. When an investor with cash buys a Treasury bond from the Fed, and then sells it back to the Fed the  next day, that investor has received, in effect, an interest payment on their cash. Thus, when the Fed conducts its repurchase operations, it is in effect setting the level of interest rates for very short-term overnight borrowing. Such overnight borrowing using Treasury bonds as collateral is very similar to the overnight borrowing that banks do with each other at the federal funds interest rate.

Jeremy Stein, who left the Federal Reserve Board of Governers in May, spells out how this will work in an interview last July with Ylan Q. Mui in the Washington Post. Basically, the notion is that the interest rate paid on reserves will establish a ceiling for the federal funds interest rate, while the interest rate embedded in the reverse repo facility will set a floor under that rate. But how much space there will be between the ceiling and the floor, and just how these tools will be used in setting monetary policy, is still very much a work in progress, waiting for when the Fed decides it is actually time to raise the federal funds interest rate.

For purely pedagogical reasons, I'm hoping the use of reverse repos doesn't come up too frequently and can largely ignored, because explaining that tool of monetary policy to an intro-level economics class will be just no fun at all.