When talking about the U.S. role and prospects in a globalizing economy, it's common to read discussions of issues relating to China, Japan, the European Union, and the "emerging market" countries. But perhaps when thinking about the U.S. economic and geopolitical future, a more basic building block should be to establish closer ties across North America. A report from the Council on Foreign Relations argues this case in "North America: Time for a New Focus" (Independent Task Force Report No. 71, David H. Petraeus and Robert B. Zoellick, Chairs Shannon K. O’Neil, Project Director). Here's a taste of the overall tone:

"[W]e believe that the time is right for deeper integration and cooperation among the three sovereign states of North America. Here is our vision: three democracies with a total population of almost half a billion people; energy self-sufficiency and even energy exports; integrated infrastructure that fosters interconnected and highly competitive agriculture, resource development, manufacturing, services, and technology industries; a shared, skilled labor force that prospers through investment in human capital; a common natural bounty of air, water, lands, biodiversity, and wildlife and migratory species; close security cooperation on regional threats of all kinds; and, over time, closer cooperation as North Americans on economic, political, security, and environmental topics when dealing with the rest of the world, perhaps focusing first on challenges in our own hemisphere. ...

The people of North America are creating a shared culture. It is not a common culture, because citizens of the United States, Canada, and Mexico are proud of their distinctive identities. Yet when viewed from a global perspective, the similarities in interests and outlooks are pulling North Americans together. The foundation exists for North America to foster a new model of interstate relations among neighbors, both developing and developed democracies. Now is the moment for the United States to break free from old foreign policy biases to recognize that a stronger, more dynamic, resilient continental base will increase U.S. power globally. “Made in North America” can be the label of the newest growth market. U.S. foreign policy—whether drawing on hard, soft, or smart power—needs to start with its own neighborhood."

The report stresses four main areas for cooperation: energy, cross-border economic ties, security concerns, and what it calls "community." Here are a few words on each.

North American already has tied together its energy markets in various ways: "For many years, virtually all of Canada’s energy exports—including oil, gas, and electricity—went to the United States. ... The North American countries are also connected through their electricity grids; this is especially true for the United States and Canada. The Eastern Interconnection grid—encompassing parts of Eastern Canada, New England, and New York—and the Western Interconnection grid—stretching from Manitoba through the U.S. Midwest—are mutually dependent and beneficial configurations. Though the U.S.-Canada electricity trade constitutes less than 2 percent of total U.S.
domestic consumption, the interchanges provide resiliency in case of power overloads or natural disasters. U.S.-Mexico interconnections are more limited, though the two countries are linked in southern California and southwestern Texas."

Pipeline connections are happening as well. Natural gas pipelines being built from Texas producers into Mexico. The report advocates construction of the Keystone pipeline from Canada into the United states. More broadly, it notes: "The construction of North America’s energy infrastructure has delayed oil and gas development. ...  North Dakota’s Bakken formation, one of the United States’ largest shale formations, continues to flare nearly one-third of its natural gas because of infrastructure
limitations. North America should build new pipelines and upgrade older ones, both within and among the three countries, to address the bottlenecks. Without adequate pipeline capacity, energy companies have increasingly turned to the rails, roads, and waterways."

In Mexico, the big news is that oil production has been falling, which in turn has led the Mexican government to start expressing some openness to foreign investment. "In contrast, Mexican oil production has fallen nearly 25 percent since 2004 to 2.5 million b/d in 2012. The downturn reflects the declining output at Cantarell—once the world’s second-largest oil field—combined with lower-than-expected production levels in newer fields, such as the Chicontepec Basin. The decline can also be traced to underinvestment, inefficiencies, and limits on technology and expertise at the state-owned energy company Petróleos Mexicanos (Pemex). Nevertheless, Mexico’s energy potential is substantial. The EIA and Advanced Resources International (ARI) estimate that the country has the world’s sixth-largest recoverable shale gas resources and significant tight oil potential. Mexico has now made a historic move: its energy reform of December 2013 will encourage private companies to invest in Mexico’s energy sector for the first time since the 1930s."

For decades, I've been reading and hearing and writing about the risks and costs of U.S. dependence on faraway sources of energy in the Middle East. In a global economy, energy markets will inevitably be intertwined. But the U.S. energy picture is being fundamentally reshaped with the growth of U.S. oil and gas drilling. If combines with the broader development of North American energy resources, the economics and international power dynamics of energy production could be transformed. 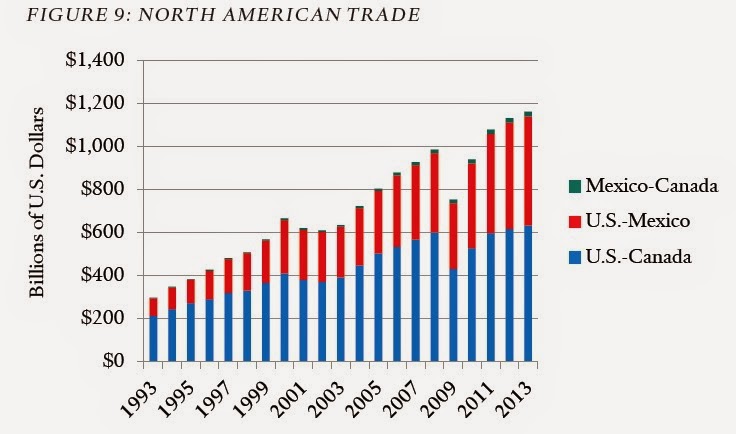 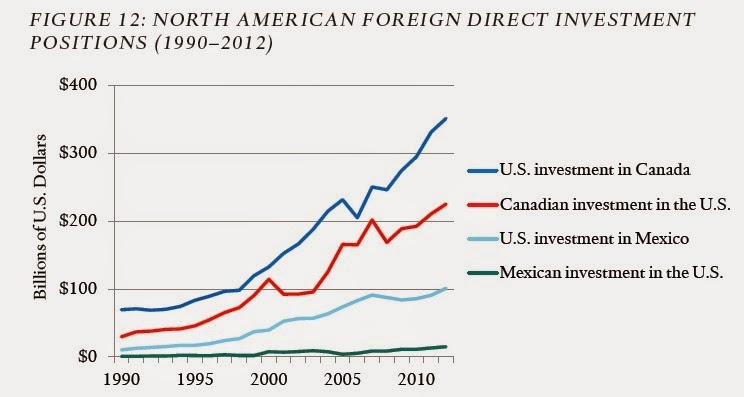 As the report notes: "North America also shares a workforce: companies and corporations now make products and provide services in all three countries. With integrated supply chains, employees in one country depend on the performance of those in another; together, they contribute to the quality and competitiveness of final products that are sold regionally or globally." I would add that the economic evidence shows the North American Free Trade Agreement had a modest but clearly positive effect on the U.S. economy.

As I see it, there are two underlying point here. First,  the world economy seems to be organizing itself into regions that rely on global supply chains that cross over between higher-income and lower-income countries. For example, in Asia there are supply chains running from Japan and Korea to Thailand and China. In Europe there are supply chains running from western to eastern Europe. North American has been building its own global supply chains between the U.S., Canada, and Mexico. Second, and more broadly, a U.S. economy that wants to prosper from growth happening elsewhere in the world economy needs to start thinking internationally. Thinking internationally in terms of Mexico and Canada is a start in that direction.

National security issues are not my bailiwick, so I don't have much to say here. But I'll make the commonplace observation that one often hears concerns about terrorist groups who might be able to ship people or materials into the U.S. by way of Canada or Mexico. There are also concerns about how epidemics might spread, or about how to deal with natural disasters. There are obvious advantages in all of these cases to not just thinking in terms of the U.S. border, but to also think about a sort of border around the continent of North America. Deeper sharing of economic and energy relationship could easily be combined with some coordination of security and other measures. I'm all in favor of stopping terrorist plots before they cross the U.S border.

This is the catch-all word that the report uses for demographic, travel, and immigration issues. Here is some discussion of the demographic issues:

Compared to the rest of the world, North America enjoys an enviable demographic pyramid: the region’s population is relatively young and fertile. North America benefits from larger families—averaging just over two children per family versus 1.6 in Europe and 1.7 in China—with the advantage coming largely from Mexico’s younger population  and slightly higher birth rates. In fact, Mexico is currently in the middle of its “demographic bonus”—the country’s working-age adults outnumber children and the elderly. By comparison, the United States’ and Canada’s demographics are more mature, but their age pyramids have been tempered by their relatively open immigration policies. The region’s future workforce size—a fundamental factor in calculating future economic growth—also compares favorably, with 22 percent of North Americans below thirty years old, compared to 16 percent in both China and Europe. North America has yet to make the most of its demographic advantages.

Here's some discussion of cross-border movement and residence in North America:

"Some thirty-four million Mexicans and Mexican-Americans and more than three million Canadians and Canadian-Americans live in the United States. Nearly one million U.S. expatriates and a large number of Canadians live, at least part of the year, in Mexico. Another one million to two million U.S. citizens and a growing number of Mexicans live in Canada. Shorter stays are numerous. U.S. citizens choose Mexico for their getaways more than any other foreign locale. Mexicans and Canadians return the favor, comprising the largest groups of tourists entering the United States: a combined thirty-four million visitors each year who contribute an estimated $35 billion to the U.S. economy. Workers, students, and shoppers routinely cross the borders; there were 230 million land border crossings in 2012, or roughly 630,000 a day. Indigenous communities also span the border, with residents frequently crossing back and forth."

First, Mexico seems to be evolving from a country that mostly experienced emigration. A couple of years ago, net emigration from Mexico essentially stopped.  Now, Mexico is experiencing a certain degree of immigration--often in the form of former emigrants who are returning. The report says:

As a traditional country of emigration, Mexico’s immigration policies are different from those of its northern neighbors. These dynamics are beginning to change. With roughly 1.4 million former emigrants returning to Mexico between 2005 and 2010, the country can utilize the skills and capital that migrants bring home. Mexico also now faces an inflow of people born abroad—immigrants grew from just under five hundred thousand in 2000 to almost one million in 2010. More than three-quarters of these immigrants were born in the United States; the vast majority are children under the age of fifteen.

For this reason, thinking about the potential for emigration from Mexico to the US in terms of the experiences of the 1980s or the 1990s is likely to be misleading.

In addition, , I find myself wondering if thinking about migration from Mexico in a broad North American context might not offer an alternative approach to the U.S. debate over immigration. Imagine a scenario in which it was relatively easy and legal for people from Mexico, Canada and the United States to work in each other's countries, but each county could keep its immigration rules with regard to all other countries in the world. Imagine further that people from Mexico, Canada, and the United States could work in each other's countries but would not become citizens of the other country (unless they separately applied to do so) and would not be eligible for income support programs in the other country (unless the host country passed specific laws offering such support).

Of course, this in-between approach to cross-border migration wouldn't please either those who want to open the borders or those who want to close them. It requires thinking about freedom of movement across North American countries in a different way than we have traditionally done. But the greater freedom of movement might be useful in offering legal status, short of citizenship, for Mexicans who are already working and living in the United States. And if the freedom of movement was limited to North America, then some of the concerns about opening U.S. borders to the world's ultra-poor would be ameliorated. I haven't thought through the possibilities of such an arrangement in detail, but as part of thinking about what a true North American geopolitical collaboration might look like, it seems worth pondering.