College freshmen typically study about 15 hours per week, according to the just-released National Survey of Student Engagement Annual Report 2014. The report is a wealth of information about different how different kinds of learning occur in colleges and universities, how faculty spend their time, and how students spend their time. But here's the figure that jumped out at me. 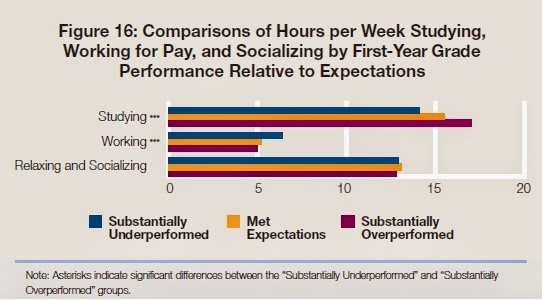 The focus of the figure is that freshmen who outperform their own expectations for grades study about 17 hours per week, while those who underperform their expectations average about 14 hours of studying per week. For the average student, the issue isn't that they are working lots of hours at a paid job, although the underperforming students seem to work just a little more on average.

The survey has been carried out for some years by researchers at the Indiana University Center for Postsecondary Research, and is funded by the Carnegie Foundation for the Advancement of Teaching. Survey results are based on "355,000 census-administered or randomly sampled first-year and senior students attending 622 U.S. bachelor’s degree-granting institutions that participated in NSSE in spring 2014."

At the risk of sounding all grinchy on this topic 14 or 17 hours per week of studying doesn't seem to me nearly enough. Over a seven-day week, this is an average of 2 or 2 1/2 hours per day of studying. And remember that this data is based on surveying students, so my guess is that if there's any bias in this estimate, it's more likely to involve students overestimating their actual study time rather than underestimating it.

My usual advice to undergraduate students is that I think of the academic side of college as a time commitment equal to a full-time job or a bit more--say, a time commitment of 40-50 hours per week, including class time. So if you are actually in class for maybe 12-15 hours per week, then a student should be expecting to put in perhaps another 30 hours of study time each week for all classes, on average.  The good news here, I guess, is that if you are student and willing to work the extra hours, you are likely to stand out over a lot of your fellow-students who aren't willing to make the commitment. The bad news is that a lot of colleges and universities don't seem to be asking much of their students, and their students are living down to those expectations.