One of the vivid lessons of the 2007-2009 recession and financial crisis is that in the modern economy, one can't just think about the financial sector as made up of banks and the stock market. Other financial institutions can go badly wrong, with dire consequences. The Global Shadow Banking Monitoring Report 2014 from the Financial Stability Board helps give a sense of these other non-banking financial institutions--especially those that sometime act in bank-like ways by receivin funds from investors, lending out those funds, and receiving interest payments.

The FSB starts with a measure of "Other Financial Institutions," which includes "Money Market Funds, Finance Companies, Structured Finance Vehicles, Hedge Funds, Other Investment Funds, Broker-Dealers, Real-Estate Investment Trusts and Funds." Here's a figure showing how these "other financial institutions" (the red and blue bars) compare in size with the banking sector (the yellow bars) in a number of countries. In the U.S., for example, the "other financial institutions" are bigger than the banking sector.

What's up with the huge size of the "other financial institutions" in the Netherlands? The report says: "In the Netherlands, Special Financial Institutions (SFIs) comprise about two-thirds of the OFIs sector and thereby explain most of the size of the shadow banking sector. There are about 14 thousand SFIs, which are typically owned by foreign multinationals who use these entities to attract external funding and facilitate intra-group transactions." For a discussion of what some of these Dutch Special Financial Institutions are doing, you can check my post from last June on the Double Irish Dutch Sandwich.

Obviously, not all of these "other financial institutions" are engaged in bank-like activities outside the banking sector. Some are acting in ways that don't involve bank-like activities making a loan and expecting an interest payment--for example, they may just be investing in stock of companies or in land, or working with financial derivatives that involve commodity prices or exchange rates or interest rate movements. Some of these are interconnected with banks in ways that means they are covered by the bank regulatory apparatus, So the FSB tries to subtract these activities out, and get an estimate of the "shadow banking" sector by itself. For the U.S., shadow banking is estimated at about half of the total of "other financial institutions," at roughly $13 trillion in assets. 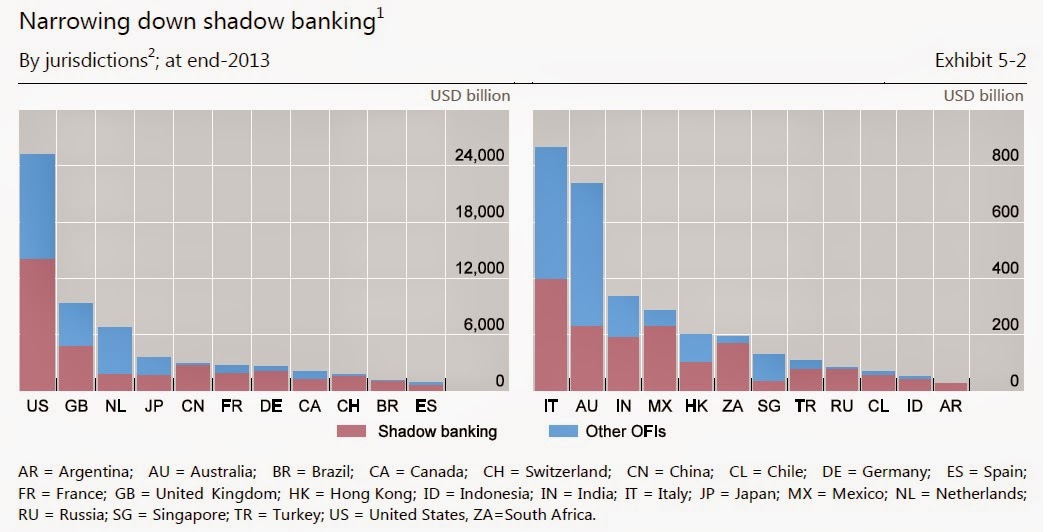 I've discussed the concerns with shadow banking on this blog before (for example, here and here). The short story is that we learned long ago that economic instability can interact with instability in the banking sector in a way that causes economic and financial weakness to feed on each other in a vicious circle. This is why pretty much every country in the world has bank deposit insurance (to prevent bank runs) and bank regulation (to prevent banks from taking too much risk). But there are lots of "other financial institutions" that receive funds and make loans. This "shadow banking" sector too can be part of a vicious circle of economic and financial instability, as we learned from 2007-2009, and since. ere's the FSB explanation of what shadow banking iis and why it matters.


The “shadow banking system” can broadly be described as “credit intermediation involving entities and activities (fully or partially) outside the regular banking system” or non-bank credit intermediation in short. Such intermediation, appropriately conducted, provides a  valuable alternative to bank funding that supports real economic activity. But experience from the crisis demonstrates the capacity for some non-bank entities and transactions to operate on a large scale in ways that create bank-like risks to financial stability (longer-term credit extension based on short-term funding and leverage). ...

Like banks, a leveraged and maturity-transforming shadow banking system can be vulnerable to “runs” and generate contagion risk, thereby amplifying systemic risk. Such activity, if unattended, can also heighten procyclicality by accelerating credit supply and asset price increases during surges in confidence, while making precipitate falls in asset prices and credit more likely by creating credit channels vulnerable to sudden loss of confidence. These effects were powerfully revealed in 2007-09 in the dislocation of asset-backed commercial paper (ABCP) markets, the failure of an originate-to-distribute model employing structured investment vehicles (SIVs) and conduits, “runs” on MMFs and a sudden reappraisal of the terms on which securities lending and repos were conducted. But whereas banks are subject to a well-developed system of prudential regulation and other safeguards, the shadow banking system is typically subject to less stringent, or no, oversight arrangements.

To me, the interesting comparison is between the U.S. and Canada--both high-income countries with sophisticated financial sectors. Clearly, the U.S. has a larger share of financial activity happening in the "other financial institutions" area, while Canada has a larger share of its financial activity happening explicitly in the banking sector. The Canadian economy is of course closely tied to the U.S economy. But the recession in Canada was milder than in the U.S., perhaps in part because Canada's financial sector was less exposed to the issues of shadow banking. Given that the banking sector is far more regulated in both countries, this offers a sort of natural experiment or comparison as the economies of the two countries evolve.