Facts on U.S. Income Distribution, Before and After Taxes

However much and in whatever direction your knee-jerk reflexes twitch when the subject of income distribution arises, it's useful to start with a grounding of facts. The Congressional Budget Office lays out many of the key facts in November 2014 "The Distribution of Household Income and Federal Taxes, 2011."

For starters, here's an overview of the distribution of before-tax, after-transfer, and after-tax income for the US. population. The population is first divided into fifths, or "quintiles," according to market income--which includes labor, business, and capital income. 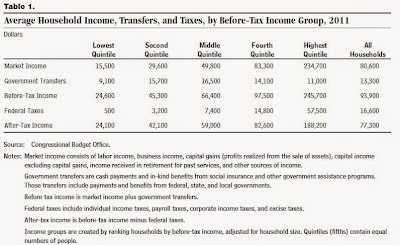 Here are a few thoughts:

1) There's a nice illustration here of the difference between median and average. The average household income for the middle quintile is $49,800. This will also be roughly the median income for a U.S. household: that is, the level where 50% of households have more and 50% have less. But the average market income for all U.S. households as shown in the last column is $80,600, because the incomes of those at the top are so high that they pull up the average for the distribution as a whole.

3) Federal taxes rise steadily with income levels, as one would hope and expect.


What have patterns of market income and federal taxes looked like over time? First, here is the change in  market income over time. This also is divided by the lowest quintile, the three middle quintiles, the top quintile minus the top 1%, and then the top 1%. 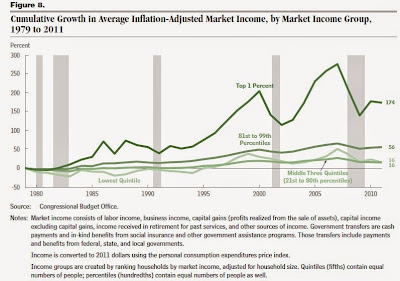 1) If one was only looking at the comparison of the bottom four quartiles with the 81st-99th percentile, the growth in inequality of income would actuall be fairly stark. Over this time, the bottom four quintiles have both seen an increase in market income of 16%, while the 81st to 99th percentile group has seen a rise of 56%. When I look at this divergence, I find that I am comfortable with an explanation involving higher returns to skilled labor as the information and communications technology revolution has taken place.

2) But then there's the 1% line. The construction of the figure requires that all the lines start in the same place at 0% change in 1979, but the 1% is almost immediately rising faster than the other groups. Remember that this is a rise in market income, not a a change in after-tax income that could be directly related to changes in tax rates at the top. The 1% line spikes in the 1990s, with the dot-com boom, and then falls, spike again with the resurgence of the housing bubble and stock market resurgence before the Great Recession, and then falls again. It is hard to look at the 1% line and describe it as a smooth rise in the returns to skilled labor; it looks a lot more like the 1% are receiving a greater share of their income related to stock market gains, in ways that rise and fall with the market.

3) When I post this kind of figure, I often receive notes telling me to beware of the fact that the top 1% isn't the same each year, but over time is instead a rotating group. The point is a fair one. But it's also worth noting that there is no evidence of which I am aware suggesting that movement in and out of different income groups has increased over time. Thus, what is clearly a greater inequality of income does not appear to be offset by greater mobility.

What about the path of federal tax rates? Here's the path of tax rates over time that includes all federal taxes: that is, federal income taxes, payroll taxes, corporate income taxes (attributed back to individuals). and excise taxes. Again, the division here is top 1%, 81st-99th percentile, middle three quintiles, and bottom quintile. Notice that these are average tax rates. Thus, a person at the very top of the income distribution might well be paying a tax rate on the marginal dollar of market income received of 40% or more, but the average tax rate for that same person over all income received could well by the 29% shown for 2011 in the figure. 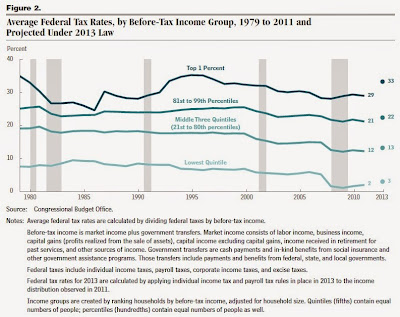 Clearly, there is some fall and rise and fall againin the aveage tax rates paid by the top 1%. There is also some fall since the mid-1990s in average federal tax rates on income paid by all income groups. But the changes in average tax rates are clearly much, much smaller than the change in market income levels, which are what is really driving the rise in inequality.

As I have pointed out on this blog before, various reports have emphasized the theme that when after-tax, after-benefit inequality in the U.S. economy is compared to other high-income countries, the greater inequality in the U.S. economy is not primarily driven by the fact that the U.S. tax system is less progressive than that of other countries, which doesn't actually seem to be true, but by the fact that the benefits paid by the U.S. government are not as targetted to those with lower incomes as the benefits paid in other countries. For example, here's a discussion of an OECD report on this theme, and here's a discussion of a CBO report noting that while U.S. redistribution via the tax code hasn't changed much in recent decades, redistribution via government spending has declined.
Posted by Timothy Taylor at 7:00 AM