No one who knows anything about gross domestic product, including economists and government statisticians, thinks it is a broad measure of social well-being. Moreover, economists at the Bureau of Economic Analysis don't want the job of coming up with a broad measure, either.  In the June 2020 issue of the Survey of Current Business, J. Steven Landefeld, Shaunda Villones, and Alyssa Holdren provide an essay on "GDP and Beyond: Priorities and Plans." They write: "BEA economists use market prices and volumes to measure GDP and other economic aggregates and have no special expertise in deciding the appropriate weights to combine indicators such as education and life expectancy with gross national income per capita."
It seems sensible to me to have the government focused on collecting a wide array of statistics across a full range of economic and social indicators, and then having outsiders debate the ultimate meaning of "better off." But as Landefeld, Villones and Holdren point point out, along with a set of outside commenters, there are plenty of challenges even when just sticking to what can be measure or at least estimated based on prices and quantities. Here are some comments and thoughts on what BEA lists as its top priorities moving forward.
Human Capital
We have known for a long time that investments in education, skills, and experience lead to greater "human capital" which pays off for the economy as a whole. But when we discuss "investment" as a part of GDP, we remain focused on purchases by firms of plant, equipment, and software along with intangible investment from corporate R&D. Landefeld, Villones and Holdren mention one striking estimate that one estimate comparing the accumulated stock of human capital with the accumulated stock of physical capital, the stock of human capital may be worth 16 times as much. 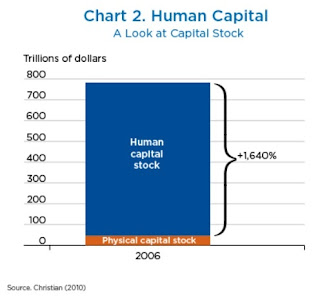 But there's a real challenge here in measuring human capital investment. It can be estimated in various ways, which don't agree. In addition, it seems  plausible me that human capital in the form of education is a mixture of a consumption good and an investment good, which complicates matters further. Here's one of the outside comments from Lisa Lynch:

There are three main approaches for measuring human capital investment for the purpose of national accounts: Kendrick’s (1976) Cost-based approach; the Lifetime income approach as developed by Jorgenson and Fraumeni (1989 and on); and the Indicators approach as detailed by the OECD 2011 (and updated every two years since), and Barro and Lee 2013. Measuring investment in human capital based on costs typically includes spending on schools, employee training costs, opportunity cost of time acquiring human capital, and a range of expenditures on others items such as libraries, radio, TV, books and other items having human capital value. The Jorgenson-Fraumeni (J-F) Lifetime income stream focuses on the present value of the return to formal education only. Finally, the Indicators approach pulls together a range of metrics such as adult literacy, school enrollments rate, average years of schooling, and the percentage of highly qualified workers to capture differences across countries and time in human capital investment.

In principal the Cost-based and Lifetime income approaches should produce values equal to each other. In practice they do not. The Lifetime-income approach produces estimates of investments in human capital 6 to almost 10 times greater than the Cost-Based approach. ...

While there has been significant work done by the BEA to develop a satellite account for household production I would urge the BEA to add additional non-labor market activities that take place outside the home but meet the threshold of “Would someone pay another person (a “third person” from outside the home) to perform the activity?” The first such activity is elder care. We know from the American Time Use Survey (2014–15) that approximately 16.2% of the U.S. population provides eldercare—unpaid care for someone over the age of 65 with a condition related to aging. Almost all of this care takes place outside the home and on an “average” day, 26 percent of unpaid eldercare providers spend an average of 3 hours in eldercare activities. With an aging population this is a growing dimension of household production that should receive increasing attention in household satellite accounts.

A second area of non-labor market work that is not captured in our satellite accounts is volunteering. From the 2015 American Time Use Survey we learn that 9% of those over age 64 volunteer on an average day. For all those volunteers over age 25 they spent an average of 2.25 hours in this activity. Examples of volunteering include administrative and support activities, social service and care activities, and indoor and outdoor maintenance, building, and clean‐up activities. While not all aspects of volunteering may meet the standard of paying another person for this work, much of it would.

A third area of non-labor market work includes the “free labor” facilitated by IT. Examples of this include ATM bank transactions, self-service work of pumping gas and bagging groceries, online airline ticket purchase and check-in, “self-service” baggage tagging/drop, self-service keyless check-in and checkout at hotels, and ordering, paying and self-pickup of meals. None of these economic activities are captured in our national accounts today even though we still have employees who are paid to do this work.

Distribution of Income
When thinking about growth of the overall economy as measured by GDP, and evaluating its costs and benefits, it seems useful to know what distribution of income is happening as well. But measuring income distribution in a way that links up directly to GDP is harder than it may sound at first. It's common for measures of income distribution to focus on personal income, using either survey data or administrative data (like tax returns). But such measures are mostly limited to personal income, which is only about half of GDP. Could measures of distribution be linked to overall GDP? In his comment, Angus Deaton sounds a cautionary note about this agenda:

Piketty, Saez and Zucman (PSZ) have done a great service by calculating a set of distributionally disaggregated national accounts for the United States. The basic idea is irresistible. Yet these first attempts have raised many serious difficulties that were not apparent at first. Most immediately, only about half of national income appears on individual tax returns. Allocating from tax returns is hard enough, because tax units are neither individuals nor households, but allocating the other half of national income is an immensely more difficult task, requiring assumptions that are rarely well supported by evidence, and often seem arbitrary. Because distribution is such a controversial topic, these assumptions leave plenty of scope for politically-biased challenges, in which each commentator can choose their own alternatives and get almost any result they choose, inequality is increasing, inequality is not increasing, and everything in between. It is surely not good practice for statistical offices, as opposed to researchers, to have to make such deeply controversial choices. My own preference would be to give up on the bigger task of measuring the distribution of national income, and to stick to the feasible, but still difficult, challenge of allocating personal income, both before and after taxes and benefits.

Health Care
The usual idea of measuring GDP is to look at a product, and then to measure the price times the quantity produced. For products like steel or oil or cars or pizzas or haircuts, this works pretty well. But health care is an ever-evolving mixture of inputs, and the specific output that is being purchases is hard to measure.  Thus, a standard way of measuring "output" in health care has been to look at total spending on healthcare--which is of course a measure of inputs, not of outputs like reducing cases or morbidity or deaths from diabetes or cancer. Health care expenditures are a huge and growing, headed for one-fifth of all GDP. But there is often some skepticism over whether the rise in health care spending as a share of GDP represents a rise in outputs--like improved health. In his comment, Angus Deaton puts the point with some force:

The American healthcare system poses one of the most serious challenges to national income measurement, and plays into its well-known weaknesses. Like other services, it is measured, not by its output in terms of its contribution to health, but by its inputs, such as the number of procedures, doctor visits, or prescriptions sold. I do not know how to do better than this, but I do know that these numbers, currently about 18 percent of GDP, vastly overstate any imaginable output measure. Americans have lower life expectancy and higher morbidity than do other rich countries, who spend much less. To take a concrete example, Switzerland, which has the world’s second most expensive healthcare system, spends only 12 percent of its GDP. So one measure of the value of the output of American healthcare is 12 percent of American GDP, which would mean that the sector has negative value added of a trillion dollars a year; to balance the accounts, this trillion dollars would show up as poll tax on consumers, $8,700 per head, which is being transferred as a tribute, or ransom, from consumers to healthcare providers. Of course, I am not suggesting that the BEA adopt this calculation, but it illustrates the dangers of not having a measure of output and of accepting valuation at cost.

The paper and comments raise a variety of other issues.  Those who want still more detail might head for a "Symposium: Are Measures of Economic Growth Biased?" in the Spring 2017 issue of the Journal of Economic Perspectives (where I work as Managing Editor):
Posted by Timothy Taylor at 12:28 PM