Pregnancy-Related Mortality in the US

When it comes to maternal mortality during pregnancy, the United States not only lags behind other high-income countries, but has been getting worse. The National Academies of Sciences, Engineering, and Medicine tells the story in its report Birth Settings in America: Outcomes, Quality, Access, and Choice.  Here's the trendline of US maternal mortality over time: 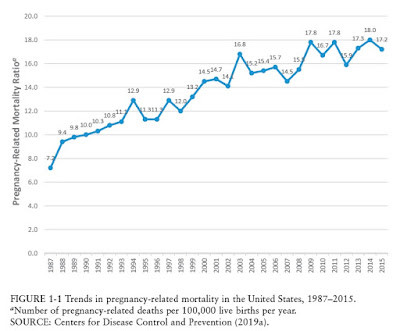 As part of putting this in (grim) perspective, the report notes (citations omitted):

The fundamental problem here doesn't seem to be an issue of too little overall spending, but more of misallocated spending. US overall healthcare spending is high, and costs of childbirth are a big part of that. The NAS report notes (citations omitted):

Childbirth is the most common reason U.S. women are hospitalized, and one of every four persons discharged from U.S. hospitals is either a childbearing woman or a newborn . As a result, childbirth is the single largest category of hospital-based expenditures for public payers in the country, and among the highest investments by large employers in the well-being of their employees. Cumulatively, this spending accounts for 0.6 percent of the nation’s entire gross domestic product, roughly one-half of which is paid for by state Medicaid programs.

The discussion in the report suggests that there is too little spent on prenatal care, perhaps some overview of (costly) hospitals as a venue for births compared with other options, and an overuse of some costly care like C-sections.
A natural concern is how this might relate to infant mortality. However, US infant mortality has been falling over time. The two main concerns in this area seem to be a rise in the share of children born with low birthweights, together with large discrepancies across groups. Here's a figure on low birthweights from a National Center for Health Statistics Data Brief in 2018:

Here's the NAS report on infant mortality differences across groups (citations and references to figures omitted).

In contrast to maternal mortality, infant mortality in the United States has been declining over the past 20 years, and there are expanded opportunities for survival at increasing levels of prematurity and illness complexity. However, large disparities persist among racial/ethnic groups and between rural and urban populations. In 2017, infant mortality rates per 1,000 live births by race and ethnicity were as follows: non-Hispanic Black, 10.97 per 1,000; American Indian/Alaska Native, 9.21 per 1,000; Native Hawaiian or Other Pacific Islander, 7.64 per 1,000; Hispanic, 5.1 per 1,000; non-Hispanic White, 4.67 per 1,000; and Asian, 3.78 per 1,000. ... Rates of preterm birth and low birthweight have increased since 2014, and as with other outcomes, show large disparities by race and ethnicity. Low-birthweight (less than 5.5 pounds at birth) and preterm babies are more at risk for many short and long-term health problems, such as infections, delayed motor and social development, and learning disabilities. About one-third of infant deaths in the United States are related to preterm birth ...

The NAS report does not offer a lot of clear recommendations for what should be done. The discussion of steps that could be taken for quality improvement (QI) is full of statements like: "While many QI initiatives have shown promising results, many current QI initiatives are underfunded." Do tell. But the report does offer some possible models to follow, like the California Maternal Quality Care Collaborative mentioned earlier.
Posted by Timothy Taylor at 12:01 PM