The Boy, the Wolf, and the Case for Solar Radiation Management in Response to Climate Change

Richard Zeckhauser delivered a keynote address at the meetings of the Southern Economic Association last November, and an early online version in advance of publication is now available at the website Southern Economic Journal: Three prongs for prudent climate policy," by Joseph E. Aldy and Richard Zeckhauser (first published April 29, 2020).
Zeckhause offers this retelling of the boy and the wolf fable (footnotes omitted):

An extremely analytic boy lives in a village high in the mountains. The village used to have a traditional crop‐based economy, with a few scraggly sheep on the side. However, outside technology produced hybrid sheep that yield ample wool and mutton, and thrive at high altitudes. The village turned to mainly raising sheep, and ever more sheep.

When sheep were few, they could graze nearby the village. But when they became abundant, they had to graze well beyond where the villagers lived, namely in the outlands. The village had been warned that sheep without humans living nearby bring wolves. The boy has seen wolves and noticed that sheep have disappeared in unusual numbers. The boy's pleas for a shift back toward a less‐profitable crop economy have been ignored. Moreover, the boy is warning that more wolves are likely to take up residence nearby, and those wolves may reproduce. Changing the mix in the economy significantly back toward crops (a mitigation measure), will lower the wolf threat. As the first prong of defense, he recommended a 50% cutback in sheep, thus significantly reducing their attracting smell and their presence in the outlands.

The villagers heard the boy's message, and they responded, albeit in a woefully insufficient fashion. Whereas previously they had raised 20 sheep per family, they cut back to 18 and raised some vegetables. But evidently wolf numbers were still below equilibrium, and the losses to them increased.

Given the pace of sheep loss, and the unwillingness of the villagers to cut back sharply, the boy recommended that another layer of protective fencing (an adaptation technology) be erected in the outlands, even where the terrain is steep. This would be a second prong of the defense strategy. The village made a half‐hearted effort; after all, fencing is expensive, particularly in rocky and hilly domains. Some new fences were built, but the wolves readily evaded most of them. After a minor dip, the losses continued to rise.

Finally, the boy in desperation recommended that the village raise a hunting posse to search out and kill or scare away the wolves (an amelioration strategy), a third prong of defense. The villagers are very reluctant. They are farmers turned shepherds, not hunters. There may be riding accidents or gun accidents; indeed, a wolf may even turn on the posse. The village council votes against raising a posse. A few more fences are built, and the council implores the villagers to cut their flocks, and return to agriculture, but few villagers follow that course. Raising large numbers of hybrid sheep, even with the current 20% annual loss rate, is more profitable than growing crops.

As the annual loss rate climbs to 25%, the boy cries: "Please, can't we move forward on all three fronts? Someday the wolves will come to snatch our children, and that will end the world as we know it."

And so it is with climate change. We've been told, correctly, that the world is running out of time to curb its emission‐profligate ways. The world did little mitigation and ran out of the urgent time it was given. And matters have gotten worse, much worse. Emissions cutting, drastic emissions cutting, are still the recommended primary prong of our defense. Experience suggests, and economics reveals, that the magnitude of needed cutting will be almost impossible to achieve in the time available. Moreover, even if the prescribed level of mitigation is met, it may already be too late. A second prong of defense, adaptation, has received some discussion, but very little actual implementation. Adaptation would consist of such measures as building barriers to the ocean, restoring absorptive marshes, repositioning sensitive equipment from cellars to roofs, and preventing new construction in threatened areas. This analysis considers a third prong, amelioration through SRM to complement mitigation and adaptation.

Zeckhauser's emphasizes several themes. The mitigation strategy for climate change has now been in the public eye at least since the 1992 "Earth Summit" in Rio de Janiero. As we approach the three-decade anniversary of that summit, we can look at the data to find out how well the mitigation strategy is working. The first figure shows global carbon emissions annually from fossil fuels: the second figure shows atmospheric concentrations of carbon. 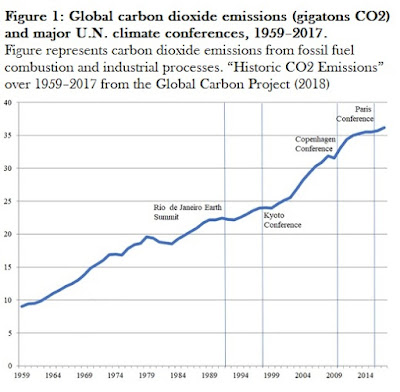 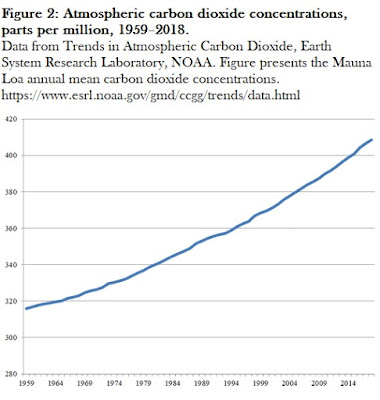 Zeckhauser is not expressing opposition to a mitigation policy. He is just pointing out a hard truth: mitigation is an arduous and difficult and costly path. Given the politics and economics of the world in which we live, it is not guaranteed to succeed. Given the risks involved from high and rising emissions of carbon and other greenhouse gases, it makes to think about combining mitigation with advance planning for adaptation and amelioration some other costly and even risky steps. As the authors note:

Mitigation efforts, which will require immense efforts and vast expenditures, will likely take decades to even cut emissions in half. Large‐scale renewable power, for example, would likely require years of innovation and commercialization of large‐scale battery storage, and the hopeful development of nuclear fusion. ...

On the choices between amelioration and adaptation (citations and footnotes omitted):

The academic literature as well as the media have dedicated significantly less attention to amelioration than to emission mitigation. The most promising amelioration technology to date, in terms of feasibility and cost, as mentioned, is SRM [solar radiation management]. It would inject aerosols, most likely sulfur particles delivered by airplane, into the upper atmosphere to reflect back incoming solar energy. This would lower the temperature for a given accumulation of atmospheric GHGs [greenhouse gases]. This technology draws on research about the cooling impacts of introducing sulfur dioxide (SO2) into the atmosphere—from volcanic eruptions as well as the combustion of sulfur‐intensive coal and petroleum products. An SRM strategy would have side effects, perhaps extremely costly side effects.

Implementation of SRM on a scale sufficient to cool the planet will take considerable time and money, though a slight fraction of the costs of climate change ... While scientists are quite confident of its efficacy, experiments are still needed to demonstrate the feasibility of implementation. To deliver the SO2 to the lower stratosphere will require a new type of plane, and planes take years to develop. Such change will require research on feasibility, safety, and governance, and it could take many years to achieve grudging acceptance of this technology and then move to actual implementation at any scale.

Adaptation, will require considerable time and money as well. For example, if physical barriers are to be built to protect against rising sea levels and more intense storms, it will take years to figure out the engineering requirements, develop the plans, and secure the political will to produce the required resources. For example, the U.S. Army Corps of Engineers (2019) has identified a six‐mile long sea barrier with storm surge gates as a potential investment to protect New York City from climate change. It estimates that the wall would take 25 years to construct. Moving human activity away from the coasts will require decades and trillions of dollars. In short, the monies expended on adaptation will vastly exceed those required for SRM. That is true even if political realities prevent many worthwhile protective projects from being undertaken.

Zeckhauser focuses most of his talk on the difficult issues of risk and implementation of a strategy to ameliorate the effects of carbon emissions with a strategy of solar radiation management. Here, I'll just mention that people in the modern world yearn for and even expect that there will be a techno-fix for difficult problems.  A new coronavirus? Whip up a vaccine. Climate change? Whip up some low-cost and environmentally friendly solar and wind power.  There's nothing wrong, of course, with investing in possible techno-fix solutions. But there is something wrong with not being willing to consider to consider the risks that such solutions may not arrive soon or at all, or may be only partial answers, or may bring problems of their own--and to also make supplementary plans.
For a couple of previous posts on geoengineering, see:
Posted by Timothy Taylor at 11:53 AM