Some Economics of the 1968 US Riots

"The Kerner report was the final report of a commission appointed by the U.S. President Lyndon B. Johnson on July 28, 1967, as a response to preceding and ongoing racial riots across many urban cities, including Los Angeles, Chicago, Detroit, and Newark. These riots largely took place in African American neighborhoods, then commonly called ghettos. On February 29, 1968, seven months after the commission was formed, it issued its final report. The report was an instant success, selling more than two million copies. ...  The Kerner report documents 164 civil disorders that occurred in 128 cities across the forty-eight continental states and the District of Columbia in 1967 (1968, 65). Other reports indicate a total of 957 riots in 133 cities from 1963 until 1968, a particular explosion of violence following the assassination of King in April 1968 (Olzak 2015)."
The September 2018 issue of the  Russell Sage Foundation Journal of the Social Sciences includes a 10-paper symposium from a range of social scientists concerning "The Fiftieth Anniversary of the Kerner Commission Report." The introductory essay by Susan T. Gooden and Samuel L. Myers Jr., "The Kerner Commission Report Fifty Years Later: Revisiting the American Dream" (pp.  1–17) does an excellent job of setting the historical context and contemporary reactions to the report, along with offering some comparisons that I at least had not seen before about difference between rioting and non-rioting cities over over time.
[This post is republished from my earlier post of September 6, 2018, when this issue came out, with weblinks refreshed and a touch of editing.]

The opening paragraph above is quoted from the Gooden/Myers paper. As they point out, perhaps the most commonly repeated comment from the report was that it baldly named white racism as an underlying cause of the problems. As one example, to quote from the Kerner report: “What white Americans have never fully understood—but what the Negro can never forget—is that white society is deeply implicated in the ghetto. White institutions created it, white institutions maintain it, and white society condones it.”

Although the report was widely disseminated, it was not popular. As Gooden and Myers report:

"President Johnson was enormously displeased with the report, which in his view grossly ignored his Great Society efforts. The report also received considerable backlash from many whites and conservatives for its identification of attitudes and racism of whites as a cause of the riots. `So Johnson ignored the report. He refused to formally receive the publication in front of reporters. He didn’t talk about the Kerner Commission report when asked by the media,' and he refused to sign thank-you letters for the commissioners (Zelizer 2016, xxxii–xxxiii)."

Other contemporary critics of the report complained that by emphasizing white racism, the report seemed to imply that changes in the beliefs of whites should be the main topic, while not paying attention to institutions and behaviors. Gooden and Myers cite a pungent comment from the American political scientist Michael Parenti, who wrote back in 1970:

"The Kerner Report demands no changes in the way power and wealth are distributed among the classes; it never gets beyond its indictment of “white racism” to specify the forces in the political economy which brought the black man to riot; it treats the obviously abominable ghetto living conditions as “cause” of disturbance but never really inquires into the causes of the “causes,” viz., the ruthless enclosure of Southern sharecroppers by big corporate farming interests, the subsequent mistreatment of the black migrant by Northern rent-gorging landlords, price-gorging merchants, urban “redevelopers,” discriminating employers, insufficient schools, hospitals and welfare, brutal police, hostile political machines and state legislators, and finally the whole system of values, material interests and public power distributions from the state to the federal Capitols which gives greater priority to “haves” than to “have-nots,” servicing and subsidizing the bloated interests of private corporations while neglecting the often desperate needs of the municipalities. . . . . To treat the symptoms of social dislocation (e.g., slum conditions) as the causes of social ills is an inversion not peculiar to the Kerner Report. Unable or unwilling to pursue the implications of our own data, we tend to see the effects of a problem as the problem itself. The victims, rather than the victimizers, are defined as “the poverty problem.” It is a little like blaming the corpse for the murder."

Gooden and Myers point to another issue with the report that social scientists immediately point out. The members of the Kerner Commission made personal visits to cities that had experienced rioting, and made an effort to talk with people in the affected communities. But they made essentially no effort to visit cities that had not experienced riots. It's hard to draw inferences about the causes of riots without making some effort to look at what differs across rioting and non-rioting cities.
They offer a preliminary look at some of the economic differences across rioting and non-rioting cities. For example, this figure shows the black-white ratio of family incomes in rioting (blue) and nonrioting (orange) cities. The ratio hasn't moved much in the cities that had 1960s riots, while it increased substantially in the cities without riots. Indeed, the cities that did not riot have had slightly more equal black-white income ratios for most of the last few decades. 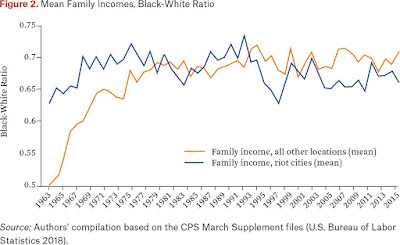 These sorts of patterns are open to a range of interpretations. Perhaps cities were less likely to riot in the late 1960s if more immediate progress in black-white incomes was happening. Perhaps something about having a higher black-white income ratio at the start made rioting more likely. Perhaps rioting led to an outmigration of middle- and upper-class families of both races, which could contribute to a stagnation of the black-white ratio. The cities that rioted were mainly the northeast, midwest, and west, and so political, social, and economic differences across the geography of the US surely also have played a role.
In other measures like the black-white ratios of unemployment rates, high school graduation rates, and poverty rates, the rioting and non-rioting cities look very similar. As Gooden and Myers write:

For a take on the Kerner Commission report earlier this year, see "Black/White Disparities: 50 Years After the Kerner Commission" (February 27, 2018). Here's the Table of Contents of this issue of the Russell Sage Foundation Journal, with links to the papers:
Posted by Timothy Taylor at 10:19 AM