Exploding US Unemployment Rates: A Peek Inside

US unemployment rates have reached higher levels, and risen in a way that is more dramatic, than at any time since the start of regular employment statistics in the late 1940s. Here's the basic picture. The unemployment rate was 14.7%  in April and then dropped unexpectedly (to me, at least!) to 13.3% in May. Even so, looking back over the last 75 years, the monthly unemployment rate has never risen this fast or reached a level this high. 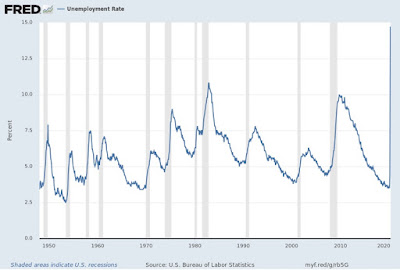 The explosive rise in the unemployment rate has been accompanied by a sharper decline in jobs than the US economy has experienced in the last 75 years. The figure shows total US employees. As you see, the number rises gradually over the decades, keeping pace with the US population. The total number of jobs drops during or just after recessions, shown by the shaded gray bars. But whether it's the Great Recession of 2007-9 or the severe double-dip recession of the early 1980s, the US economy has not seen a drop in total jobs this fast and severe. Total number of jobs was 151 million in March and 130 million in April--a drop of about 14% in a single month--before the gain of about 2.5 million total jobs in May. 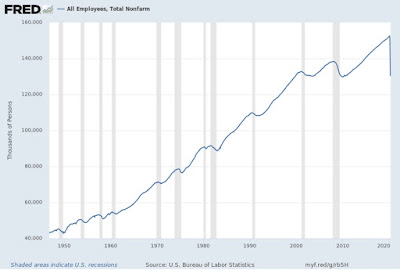 The key question about unemployment is whether there could be a quick bounceback. Are many of these employers poised to resume hiring? Are many of these workers poised to go back to work? One interesting tidbit of evidence here is the share of the unemployed who lost their jobs because of layoffs--which has some implication that they could be readily rehired. Here's another striking figure. The share of "job losers on layoff" is about 8-15% of the total unemployed from the mid-1980s up to the is around 8-15% of 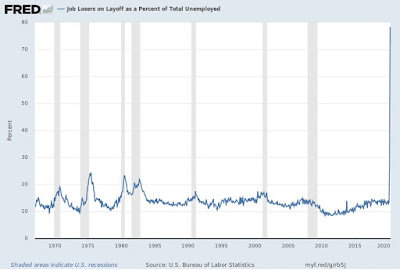 One of the shifting labor market patterns in the last 30 years or so has been the disappearance of the "layoff." If you look back at recessions in the 1970s and 1980s, you see that the share of "job losers on layoff" rises during recessions, and then falls. It was a much more common pattern for factories and other employer to lay off and then to rehire those same workers. But when you look at the recessions of 1990-91, 2001, and 2007-9, you don't see much of a rise in layoffs. Instead, the chance that an unemployed workers was laid off with a plausible prospect of being rehired, rather than just let go, got lower and lower. For example, look how low the percentage falls in the years after the Great Recession.
But the share of "job losers" on layoff just spiked to 78% in April and 73% in May, which implies that large numbers of the unemployed could conceivably be rehired quickly. But of course, a "layoff" could become an empty promise, where most of these workers are not rehired, and instead need to find new jobs in the new socially distancing economy.
I've also been struck by the difference between US and European unemployment data. When US unemployment was spiking to 14.7% in April, unemployment in the 27 countries of the European Union barely nudged up to 6.6% in April; for the subset of 19 countries in the euro zone, unemployment was 7.3% in April. Why did US unemployment spike to double European levels? The likely answer involves interactions between public policy and what is counted as "unemployment."
One key policy choice is whether assistance to workers has been sent to them directly--say, via unemployment insurance--or whether assistance to worker was funneled through employers, so that workers who were not necessarily going to work still kept receiving a (government-funded) paycheck from their employer. Jonathan Rothwell describes the difference in "The effects of COVID-19 on international labor markets: An update" (May 27, 2020, Brookings Institution).
Here's a figure from Rothwell showing the change in workers getting unemployment benefits. Notice that it's way up in Canada, Israel, Ireland, and the US. But in France, Germany, Japan, and Netherlands, there's essentially no rise in unemployment benefits. 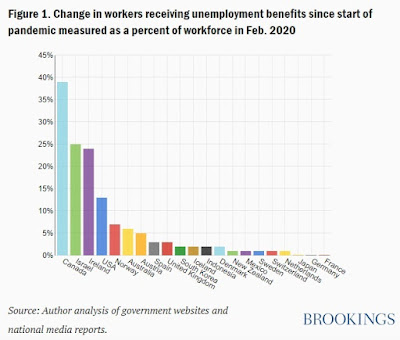 The reason is that in many countries, a number of worker are getting government assistance via their employers. In the unemployment stats for those countries, they are still counted as employed. Here's the figure from Rothwell: 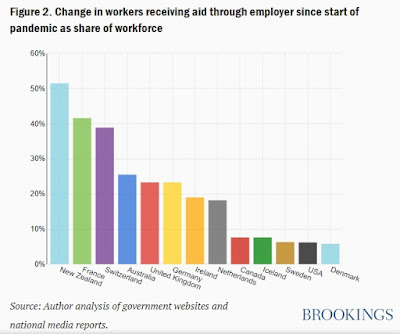 Another policy choice in the US has been to increase unemployment assistance substantially, so that it is closer to the actual pay that workers receive. Manuel Alcalá Kovalski and Louise Sheiner provide a quick background primer on "How does unemployment insurance work? And how is it changing during the coronavirus pandemic?" (Brookings Institution, April 7, 2020). As they write:

Most state UI [Unemployment Insurance] systems replace about half of prior weekly earnings, up to some maximum. Before the expansion of UI during the coronavirus crisis, average weekly UI payments were $387 nationwide, ranging from an average of $215 per week in Mississippi to $550 per week in Massachusetts. ... The CARES Act—a $2 trillion relief package aimed at alleviating the economic fallout from the COVID-19 pandemic—extends the duration of UI benefits by 13 weeks and increases payments by $600 per week through July 31st. This implies that maximum UI benefits will exceed 90 percent of average weekly wages in all states.

In other words, rather than trying to keep laid-off or furloughed workers receiving much the same income via their employer, the US approach has been to do so via the unemployment insurance system. This has caused problems. For lower-wage US workers, the higher unemployment insurance payments cover a substantial part of their typical working income--in some cases, more than 100% of their previous pay. They have a financial incentive not to return to work, even if their employer would like to re-open, until these benefits run out. Of course, other unemployed workers receiving these higher benefits may not have an option to return. In the meantime, other low-wage workers who have kept working in grocery stores, warehouses, delivery services, and from home, are not receiving such payments at all.
Given that the US policy choice was to funnel assistance to workers through the unemployment system, it's not a big shock that the unemployment rate rose so high, so fast. A near-term policy question is whether to extend the higher unemployment payments, perhaps by another six months. The Congressional Budget Office (June 4, 2020) has just released some estimate of the effects of that choice. CBO writes:

Roughly five of every six recipients would receive benefits that exceeded the weekly amounts they could expect to earn from work during those six months. The amount, on average, that recipients spent on food, housing, and other goods and services would be closer to what they spent when employed than it would be if the increase in unemployment benefits was not extended. ... In CBO’s assessment, the extension of the additional $600 per week would probably reduce employment in the second half of 2020, and it would reduce employment in calendar year 2021. The effects from reduced incentives to work would be larger than the boost to employment from increased overall demand for goods and services.

My own sense is that a blanket extension of the additional unemployment benefits is probably the politically easy choice. But the pragmatic choice would be to start thinking more carefully about how structuring these payments in a way that would strike a better balance helping those who need it with incentives to return to work.
There is a sense in which the very high US unemployment rates both understate and overstate the condition of US labor markets. Unemployment rates, by definition, leave out those who are "out of the labor force," perhaps because added family responsibilities have made it too difficult to work, or the bleak unemployment picture has made it difficult to seek a job. On the other side, some of the unemployed are are hovering in place, ready and able to return to their previous employer, but receiving enhanced unemployment insurance payments in the meantime.
Estimating these kinds of factors of course involves a bunch of judgement calls. But for an example of such analysis,  Jason Furman and Wilson Powell III have written "The US unemployment rate is higher than it looks—and is still high if all furloughed workers returned" (Peterson Institute for International Economics, June 5, 2020). Furman and Powell look at the rise in the number of people “not at work for other reasons” and the rise in the number of people who are out of the labor force. They write: "Adjusting for these factors our “realistic unemployment rate” was 17.1 percent in May, down from the April value but still higher than any other unemployment rate in over 70 years."
They also look at what the unemployment rate would be if those who say they are on layoff all returne to their jobs: "In total, an additional 14.5 million of the unemployed reported being on temporary layoff. If all of these people were immediately recalled back to work and the labor force adjusted accordingly—a very optimistic scenario—the “full recall unemployment rate” would still be a very elevated 7.1 percent."
Either way, the US economy is clearly in the midst of a recession. The question is whether it turns out to be a deep-at-the-start-but-short recession, or deep-at-the-start-and-prolonged recession. The eventual outcome is only partly about economic policy: the coronavirus and public health policy will also play a big role.
Posted by Timothy Taylor at 11:10 AM