I am now in my 35th year as Managing Editor of the Journal of Economic Perspectives. The JEP is published by the American Economic Association, which decided about a decade ago--to my delight--that the journal would be freely available on-line, from the current issue all the way back to the first issue. You can download individual articles or the entire issue, and it is available in various e-reader formats, too. Here, I'll start with the Table of Contents for the just-released Winter 2021 issue, which in the Taylor household is known as issue #135. Below that are abstracts and direct links for all of the papers. I will probably blog more specifically about some of the papers in the next week or two, as well. 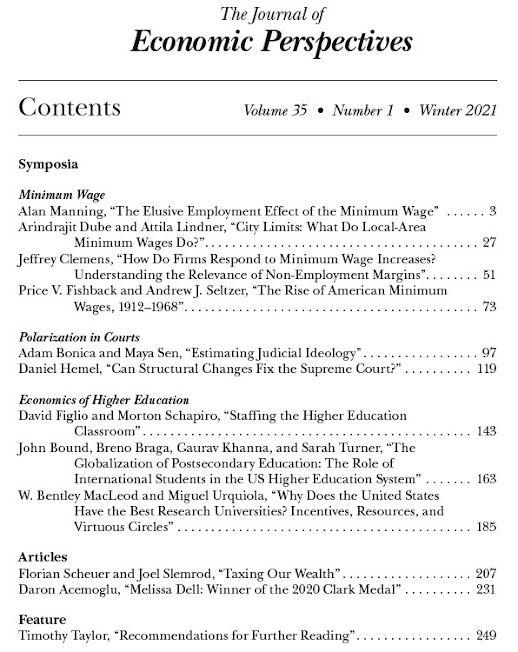 "How Do Firms Respond to Minimum Wage Increases? Understanding the Relevance of Non-employment Margins." by Jeffrey Clemens
This paper discusses non-employment margins through which firms may respond to minimum wage increases. Margins of interest include evasion, output prices, noncash compensation, job attributes including effort requirements, the firm’s mix of low- and high-skilled labor, and the firm’s mix of labor and capital. I discuss the basic theory behind each margin’s potential importance as well as findings from empirical research on their real-world relevance. Additionally, I present a set of pedagogical diagrams that show how supply and demand analyses of labor markets can be extended to bring additional nuances of real-world markets into the classroom.
Full-Text Access | Supplementary Materials

"The Rise of American Minimum Wages, 1912–1968." by Price V. Fishback and Andrew J. Seltzer
This paper studies the judicial, political, and intellectual battles over minimum wages from the early state laws of the 1910s through the peak in the real federal minimum in 1968. Early laws were limited to women and children and were ruled unconstitutional by the Supreme Court between 1923 and 1937. The first federal law in 1938 initially exempted large portions of the workforce and set rates that became effectively obsolete during World War II. Later amendments raised minimum rates, but coverage did not expand until 1961. The states led the way in rates and coverage in the 1940s and 50s and again since the 1980s. The most contentious questions of today—the impact of minimum wages on earnings and employment—were already being addressed by economists in the 1910s. By about 1960, these discussions had surprisingly modern concerns about causality but did not have modern econometric tools or data.
Full-Text Access | Supplementary Materials
Symposium on Polarization in the Courts

"Estimating Judicial Ideology," by Adam Bonica and Maya Sen
We review the substantial literature on estimating judicial ideology, from the US Supreme Court to the lowest state court. As a way to showcase the strengths and drawbacks of various measures, we further analyze trends in judicial polarization within the US federal courts. Our analysis shows substantial gaps in the ideology of judges appointed by Republican Presidents versus those appointed by Democrats. Similar to trends in Congressional polarization, the increasing gap is mostly driven by a rightward movement by judges appointed by Republicans. We conclude by noting important avenues for future research in the study of the ideology of judges.
Full-Text Access | Supplementary Materials

"Can Structural Changes Fix the Supreme Court?" by Daniel Hemel
Proposals for structural changes to the US Supreme Court have attracted attention in recent years amid a perceived “legitimacy crisis” afflicting the institution. This article first assesses whether the court is in fact facing a legitimacy crisis and then considers whether prominent reform proposals are likely to address the institutional weaknesses that reformers aim to resolve. The article concludes that key trends purportedly contributing to the crisis at the court are more ambiguous in their empirical foundations and normative implications than reformers often suggest. It also argues that prominent reform proposals—including term limits, age limits, lottery selection of justices, and explicit partisan balance requirements for court membership—are unlikely to resolve the institutional flaws that proponents perceive. It ends by suggesting a more modest (though novel) reform, which would allocate two lifetime appointments per presidential term and allow the size of the court to fluctuate within bounds.
Full-Text Access | Supplementary Materials

Symposium on Economics of Higher Education

"Staffing the Higher Education Classroom," by David Figlio and Morton Schapiro
We discuss some centrally important decisions faced by colleges and universities regarding how to staff their undergraduate classrooms. We describe the multitasking problem faced by research-intensive institutions and explore the degree to which there may be a trade-off between research and teaching excellence using matched student-faculty-level data from Northwestern University. We present two alternative measures of teaching effectiveness—one capturing “deep learning” and one capturing “inspiration”—and demonstrate that neither is correlated with measures of research success. We discuss the move toward contingent faculty in US universities and show that on average, contingent faculty outperform tenure-line faculty in the introductory classroom, a pattern driven by the lowest-performing instructors according to our measures. We also present some of the ways in which instructor gender, race, and ethnicity might matter. Together, these pieces of evidence show that several institutional objectives associated with staffing undergraduate classrooms may be in tension with one another.
Full-Text Access | Supplementary Materials

"The Globalization of Postsecondary Education: The Role of International Students in the US Higher Education System," by John Bound, Breno Braga, Gaurav Khanna and Sarah Turner
In the four decades since 1980, US colleges and universities have seen the number of students from abroad quadruple. This rise in enrollment and degree attainment affects the global supply of highly educated workers, the flow of talent to the US labor market, and the financing of US higher education. Yet, the impacts are far from uniform, with significant differences evident by level of study and type of institution. The determinants of foreign flows to US colleges and universities reflect both changes in student demand from abroad and the variation in market circumstances of colleges and universities, with visa policies serving a mediating role. The consequences of these market mechanisms impact global talent development, the resources of colleges and universities, and labor markets in the United States and countries sending students.
Full-Text Access | Supplementary Materials

"Why Does the United States Have the Best Research Universities? Incentives, Resources, and Virtuous Circles," by W. Bentley MacLeod and Miguel Urquiola
Around 1875, the US had none of the world’s leading research universities; today, it accounts for the majority of the top-ranked. Many observers cite events surrounding World War II as the source of this reversal. We present evidence that US research universities had surpassed most countries’ decades before World War II. An explanation of their dominance must therefore begin earlier. The one we offer highlights reforms that began after the Civil War and enhanced the incentives and resources the system directs at research. Our story is not one of success by design, but rather of competition leading American colleges to begin to care about research. We draw on agency theory to argue that this led to increasing academic specialization, and in turn, to more precise measures of professors’ research output. Combined with sorting dynamics that concentrated talent and resources at some schools—and the emergence of tenure—this enhanced research performance.
Full-Text Access | Supplementary Materials

"Taxing Our Wealth," by Florian Scheuer and Joel Slemrod
This paper evaluates proposals for an annual wealth tax. While a dozen OECD countries levied wealth taxes in the recent past, now only three retain them, with only Switzerland raising a comparable fraction of revenue as recent proposals for a US wealth tax. Studies of these taxes sometimes, but not always, find a substantial behavioral response, including of saving, portfolio change, avoidance, and evasion, and the impact depends crucially on design features, especially the broadness of the base and enforcement provisions. Because the US proposals are very different from any previous wealth tax, experience in other countries offers only broad lessons, but we can gain insights from closely related taxes, such as the property and the estate tax, and from optimal tax analysis of the role of wealth taxation.
Full-Text Access | Supplementary Materials

"Melissa Dell: Winner of the 2020 Clark Medal," by Daron Acemoglu
The 2020 John Bates Clark Medal of the American Economic Association was awarded to Melissa Dell, Professor of Economics at Harvard University, for her path-breaking contributions in political economy, economic history, and economic development. This article summarizes Melissa Dell's work, places it in the context of the broader literature, and emphasizes how, with its data collection, careful empirical implementation, and audacious ambition, it has revolutionized work in political economy and economic history.
Full-Text Access | Supplementary Materials