When judges are going through confirmation hearings, they tend make comments about how they will act as a neutral umpire, not taking sides and following the law. As one representative example, here's a comment from the statement of current US Supreme Court Chief Justice John Roberts when he was nominated back in 2005:

I have no agenda, but I do have a commitment. If I am confirmed, I will confront every case with an open mind. I will fully and fairly analyze the legal arguments that are presented. I will be open to the considered views of my colleagues on the bench, and I will decide every case based on the record, according to the rule of law, without fear or favor, to the best of my ability, and I will remember that it’s my job to call balls and strikes, and not to pitch or bat.

I will not here try to peer inside the minds of judges and determine the extent to which such statements are honest or cynical. But I will point out that there is strong evidence that many judicial decisions have a real ideological component, in the sense that it's easy to find judges who reach systematically different conclusions, even when they have both promised to follow the rule of law without fear or favor. The Winter 2021 issue of the Journal of Economic Perspectives includes two papers on this topic:
Bonica and Sen lay out the many ways that social scientists have used to measure judicial ideology. I'll mention some of the approaches here. It will be immediately obviously that none of the approaches is bulletproof. But the key point to remember is that when one compares these rather different ways measuring judicial ideology, you get reasonably similar answers about which judges fall into which categories.
For example, the Supreme Court Database at Washington University in St. Louis classifies all Supreme Court decisions back to 1946 using various rules:

Another approach looks at the process by which a judge is appointed, which can include both the part of the president doing the appointing, while for federal judges appointed to district or appeals courts, one might also take into account the party of the US senators from that area. A more sophisticated version of this approach seeks to estimate the ideology of the president or the senators involved, thus recognizing that not all Republicans and Democrats are identical. Yet another approach categorized judges according to their political campaign contributions that they made before being appointed, or according to the contributions made by those that the judges choose to be law clerks. Another line of research looks at newspaper editorials about Supreme Court judges during their confirmation hearings, and how they match with other measures like the categories above. There is some recent work using text-based analysis to categorize the ideology of judges according to their use of certain terms.
Yet another approach ignores the content of judicial decisions, and instead just looks at voting patterns. An approach called Martin-Quinn scores is based on the idea that the ideology of judges can be positioned along a line. As one extreme, if there were two groups of judges that always agreed with each other but always disagreed with the other group, they would be at extreme opposite ends of the line. If there were some other judges who voted 50:50 with one extreme group or the other, they would be in the middle of the line. Using these kinds of calculations and the voting records for each term, one can even see how a judge may evolve over time away from the extreme and toward the middle, or vice versa.
Here's what the Martin-Quinn for Supreme Court judges look like going back to 1946. Blue lines are judges appointed by Democrats; red lines by Republicans. There is a different score for each judicial term, and the scores can thus evolve over time. The members of the Supreme Court as is stood before the appointment of Amy Coney Barrett last fall are labelled by name. Again, remember that these scores are not based on anyone making decisions about what is "conservative" or "liberal," but only on similarities in actual voting patterns. 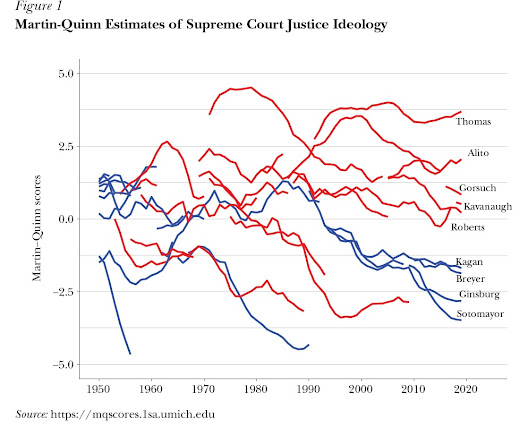 It's perhaps not a surprise that the red and blue lines tend to be separated. But looking back a few decades, you can also see some overlap in the red and blue lines. That overlap has now gone away.
While research on the Supreme Court gets the most attention, there is also ongoing work looking at lower-level federal courts as well as state and local court systems. For example, a body of academic research points out that some judges are known to be less likely to grant bail or more likely to imposed more severe sentences. Given that judges are often assigned to cases at random, when the judge is available, this means that there are cases where very similar defendants are treated quite differently by the courts--just based on which judge they randomly got. For justice, this is a bad outcome. For researchers, it can be a useful tool to figuring out whether those who randomly got bail, or got a shorter sentence, have different long-term outcomes in terms of recidivism or other life outcomes than those who randomly did not get bail or ended up with a longer sentence.
At some basic level, it isn't shocking that judges are human and have ideological differences. Indeed, sports fans will know that even when talking about referees, there are some who are more likely to call penalties, or among baseball umpires, some who are more likely to call strikes.  Indeed, the reason we need judges is because laws and their application are not fixed and indisputable. One might even argue that it's good to have a distribution of judges with at least somewhat different views, because that's how the justice system evolves.
That said, is there some kind of judicial reform that might reduce the role of judicial  ideology and/or turn down the temperature of judicial confirmation hearings? Hemel talk about a range of proposals, including ideas like a mandatory retirement age or fixed 18-year terms for Supreme Court judges. For various reasons, he's skeptical that the situation is as historically unique as is sometimes suggested, or that most of the proposals will make much difference.
One of the interesting facts that Hemel points out along the way is that the US Supreme Court has experienced "the fall of the short-term justice." He writes: "Over the court’s history, 40 justices have served for ten years or less. None of these quick departures occurred in the last half-century. Several factors have contributed to the fall of the short-term justice. Fewer are dying young, and no justice since Fortas in 1969 has been forced to depart in disgrace. The justices also are now less likely to leave the court to pursue political careers in other branches. Contrast this with Charles Evans Hughes, who left the court in 1916 to accept the Republican nomination for president, and James Byrnes, who would serve as US Secretary of State and Governor of South Carolina in his post-judicial life." We have instead evolved to a situation where justices leave the court only because of infirmity or death.
Hemel offers a different kind of reform that he characterizes as a "thought experiment," which is at least useful for expanding the set of policy options. The idea is to break the rule that a judge can only be added to the court when another judge leaves. Hemel writes:

Decoupling could be implemented as follows. Each president would have the opportunity to appoint two justices at the beginning of each term, regardless of how many vacancies have occurred or will occur. Those justices would join the bench at the beginning of the next presidential term. For example, President Trump, upon taking office in January 2017, would have had the opportunity to make two appointments. Those appointees—if confirmed—would receive their commissions in January 2021. The retirement or death of a justice would have no effect on the number of appointments the sitting president could make. Justices would continue to serve for life. Decoupling thus shares some similarities with the norm among university faculties, where senior members enjoy life tenure but the departure of one does not automatically and immediately trigger the addition of a new member.

The decoupling proposal would result in an equal allocation of appointments across presidential terms, though that is not its principal advantage. It would create new opportunities for compromise when the White House and Senate are at daggers drawn: Because appointments would come in pairs, a Democratic president could resolve an impasse with a Republican Senate (or vice versa) by appointing one liberal and one conservative. It would significantly reduce the risk that a substantial number of justices would be subject to the loyalty effect, since no more than two justices would ever be appointees of the sitting president (and only in that president’s second term). The loyalty effect could be eliminated entirely by modifying the plan so that justices receive their commission only after the president who appointed them leaves office (that is, if Trump had been reelected in 2020, none of his appointees would join the court until January 2025).

The plan would likely have a modest effect on the size of the court. The mean tenure of justices who have left the court in the last half-century (since 1970) is 26.4 years, though one might expect tenure to be shorter if appointees had to wait four (or eight) years between confirmation and commission. If justices join the court at a slightly faster rate than they depart, the gradual growth in the court’s size would be tolerable. ... A larger court would serve the objective sometimes cited by term-limit proponents of reducing the influence of any individual jurist’s idiosyncrasies over the shape of American law. It would also likely lessen the macabre obsession with the health of individual older justices.

Hemel also argues that these changes could be implemented via ordinary legislation. I don't have a well-developed opinion on this kind of proposal, but I had not heard the proposal before, and it seemed as worthy of consideration as some of the better-known ideas.
Posted by Timothy Taylor at 1:21 PM