The Dependence of US Higher Education on International Students

US higher education in recent decades had beeome ever-more dependent on rising inflows of international students--a pattern that was already in likely to slow down and now is being dramatically interrupted by the pandemic. John Bound, Breno Braga, Gaurav Khanna, and Sarah Turner describe these shifts in "The Globalization of Postsecondary Education: The Role of International Students in the US Higher Education System" (Journal of Economic Perspectives, Winter 2021, 35:1, 163-84). They write:

For the United States, which has a large number of colleges and universities and a disproportionate share of the most highly ranked colleges and universities in the world, total enrollment of foreign students more than tripled between 1980 and 2017, from 305,000 to over one million students in 2017 (National Center for Enrollment Statistics 2018). This rising population of students from abroad has made higher education a major export sector of the US economy, generating $44 billion in export revenue in 2019, with educational exports being about as big as the total exports of soybeans, corn, and textile supplies combined (Bureau of Economic Analysis 2020). 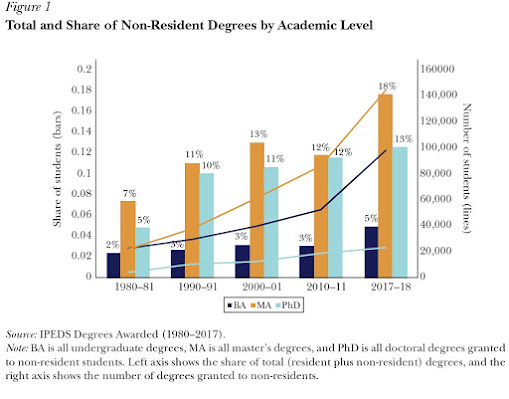 [F]oreign students studying at the undergraduate level are most numerous at research-intensive public universities (about 32 percent of all bachelor’s degrees), though they also enroll in substantial numbers at non-doctorate and less selective private and public institutions. ...  The concentration of international students  in master’s programs in the fields of science, technology, engineering, and mathematics is even more remarkable: for example, in 2017 foreign students received about 62 percent of all master’s degrees in computer science and 55 percent in engineering. ... Many large research institutions now draw as much as 20 percent of their tuition revenue from foreign students (Larmer 2019)."

This table shows destinations of international students from China, India, and South Korea, three of the major nations for sending students to the US. 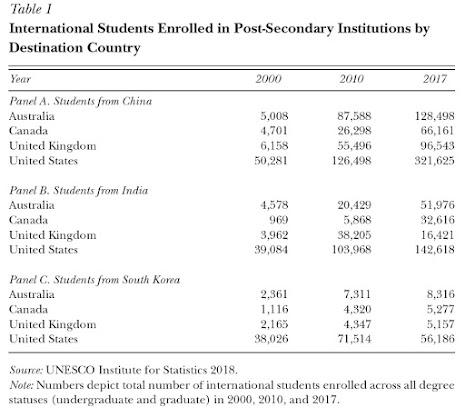 However, Bound and co-authors note that the US lead as a higher education destination has been diminishing: "Although the United States remains the largest destination country for students from these countries, the US higher education system is no longer as dominant as it was 20 years ago. As an illustration, student flows from China to the United States were more than 10 times larger than the flows to Australia and Canada in 2000; by 2017, those ratios fell to 2.5 to 1 and 3.3 to 1, respectively."
This pattern of rising international enrolments in US higher ed was not likely to continue on its pre-pandemic trajectory. Other countries have been building up their higher education options. In addition, if you were a young entrepreneur or professional from China or India, the possibilities for building your career in your home country look a lot better now than they did, say, back in about 1990. But the pandemic has taken what would have been a slower-motion squeeze on international students coming to US higher education and turned it into an immediate bite. Bound and co-authors write:

Visas for the academic year are usually granted between March (when admissions decisions are made) and September (when semesters begin). Between 2017 and 2019, about 290,000 visas were granted each year over these seven months (United States Department of State 2020). Between March and September 2020, only 37,680 visas were granted—an extraordinary drop of 87 percent. Visas for students from China dropped from about 90,000 down to only 943 visas between March and September 2020. A fall 2020 survey of 700 higher education institutions found that one in five international students were studying online from abroad in response to the COVID-19 pandemic. Overall, new international enrollment (including those online) decreased by 43 percent, with at least 40,000 students deferring enrollment (Baer and Martel 2020).

Overall, it seems to me an excellent thing for the US higher education system and the US economy to attract talent from all over the world. But even if you are uncertain about those benefits, it is an arithmetic fact that the sharp declines in international students are going to be a severe blow to the finances of US higher education.
Posted by Timothy Taylor at 3:15 PM