Why has the economic research of the last few decades had a hard time getting a firm handle on the the effects of minimum wages? The most recent issue of the Journal of Economic Perspectives (where I have worked as managing editor for many years) includes a set of four papers that bear on the subject.  The short answer is that the effects of a higher minimum wage are likely to vary by time and place, and are likely to include many effects other than reduced employment. In this post, I'll offer a longer elaboration. For reference, the four JEP papers are:

Manning starts his paper by pointing out that mainstream views on the minimum wage have shifted substantially in the last 30 years or so. He writes:

Thirty years ago, ... there was a strong academic consensus that the minimum wage caused job losses and was not well-targeted on those it set out to help, and that as a result, it was dominated by other policies to help the working poor like the Earned Income Tax Credit. ,,,[P]olicymakers seemed to be paying attention to the economic consensus of the time: for example, in 1988 the US federal minimum wage had not been raised for almost a decade and only 10 states had higher minima. Minimum wages seemed to be withering away in other countries too. ... In 1994, the OECD published its view on desirable labor market policies in a prominent Jobs Study report, recommending that countries “reassess the role of statutory minimum wages as an instrument to achieve redistributive goals and switch to more direct instruments” (OECD 1994).

The landscape looks very different today.  ...In the United States, the current logjam in Congress means no change in the federal minimum wage is immediately likely. However, 29 states plus Washington, DC have a higher minimum wage. A number of cities are also going their own way, passing legislation to raise the minimum wage to levels (in relation to average earnings) not seen for more than a generation ... Outside the United States, countries are introducing minimum wages (for example, Hong Kong in 2011 and Germany in 2015) or raising them (for example, the introduction of the United Kingdom’s National Living Wage in 2016, a higher minimum wage for those over the age of 25). Professional advice to policymakers has changed too. A joint report from the IMF, World Bank, OECD, and ILO in 2012 wrote “a statutory minimum wage set at an appropriate level may raise labour force participation at the margin, without adversely affecting demand, thus having a net positive impact especially for workers weakly attached to the labour market” (ILO 2012). The IMF (2014) recommended to the United States that “given its current low level (compared both to US history and international standards), the minimum wage should be increased.” The updated OECD (2018) Job Strategy report recommended that “minimum wages can help ensure that work is rewarding for everyone” (p. 9) and that “when minimum wages are moderate and well designed, adverse employment effects can be avoided” (p 72).

Why the change? From a US point of view, one reason is surely that the real inflation-adjusted level of the minimum wage peaked back in 1968. Thus, it makes some intuitive sense that studies looking at labor market data from the 1960s and 1970s would tend to find big effects of a higher minimum wage, but as the real value of the federal minimum wage declined over time, they would tend to find smaller values. Here's a figure from the Fishback and Seltzer paper showing the real (solid yellow) and nominal (blue dashed) value of the minimum wage over time: 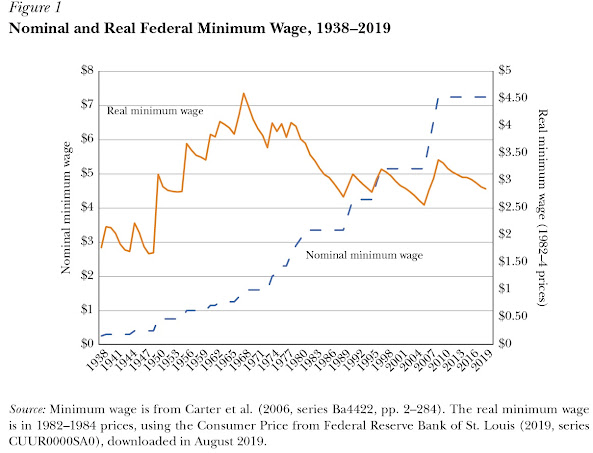 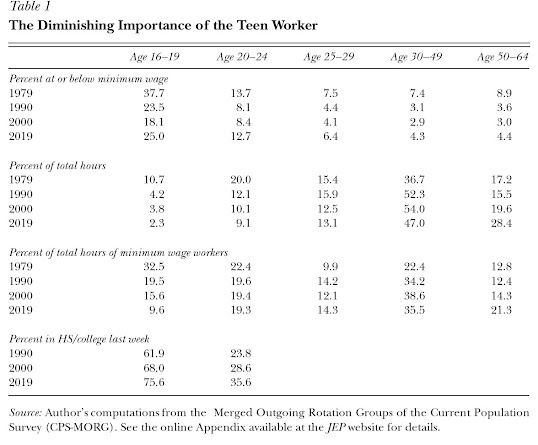 But this kind of analysis is subject to the basic problem that the states or cities that choose to raise their minimum wages are not randomly selected. They are usually places where average wages and wages for low-skill workers are already higher. As an extreme example, the minimum wage in various cities near the heart of Silicon Valley (Palo Alto, San Francisco, Berkeley, Santa Clara, Mountain View, Sunnyvale, Los Altos) is already above $15/hour. But in general, wages are also much higher in those areas. Asking the question of whether these higher minimum wages reduced low-skill or low-wage employment in these cities is an interesting research topic, but no sensible person would extrapolate the answers from Silicon Valley to how a $15/hour minimum wage would affect employment in, say, Mississippi, where half of all workers in the state earn less that $15/hour.

Many additional complexities arise. Clemens goes through many of the possibilities in his paper. Here are some of them.

If you work in a tradeable-sector job and the state-level or local-level minimum wage rises, it may cause real problems for the firm, which is competing against outsiders. But many low-skilled jobs are in the "nontradeable" sector: food, hotels, and others. In those situations, a rise in the minimum wage means means higher costs for all the local competing firms--in which case it will be easier to past those costs along to consumers in the form of higher prices. Of course, if an employer can pass along the  higher minimum wage to consumers, any employment effects may be muted.

2) An employer faced with a higher minimum wage might try to offset this change by paying lower benefits (vacation, overtime, health insurance, life insurance, and so on.)  The employer might also try to get more output from workers by, for example, offering less job flexibility or pushing them harder in the workplace.

3) A higher minimum wage means an increased incentive for employers and worker to break the law and to evade the minimum wage. Clemens cites one "analysis of recent minimum wage changes [which] estimates that noncompliance has averaged roughly 14 to 21 cents per $1 of realized wage gain."

4) An employer faced with a higher minimum wage might, for a time, not have many immediate options for adjustment. But over a timeframe of a year or two, the employer might start figuring out ways to substitute high-paid labor for the now pricier minimum wage labor, or to look for ways of automating or outsourcing minimum wage jobs. Any study that focuses on effects of a minimum wage during a relatively small time window will miss these effects. But any study that tries to look at long-run effects of minimum wage changes will find that many other factors are also changing in the long run, so sorting out just the effect of the minimum wage will be tough.

5) A higher minimum wage doesn't just affect employers, but also affects workers. A higher wage means that workers are likely to work harder and less likely to quit. Thus, a firm that is required to pay a higher minimum wage might recoup a portion of that money from lower costs of worker turnover and training.

There is ongoing research on all of these points. There is some evidence backing them, and some evidence not, but the evidence again often varies by place, time, occupation, and which comparison group is used. The markets for supply and demand of labor are complicated places.

I don't mean to be a whiner about it, but figuring out the effects of a higher minimum wage from the existing evidence is a difficult question.  But of course, no one weeps for the analytical problems of economists. Most people just want a bottom line on whether a $15/hour minimum wage is good or bad, so that they know whether to treat you as friend or foe--depending on whether you agree with their own predetermined beliefs. I'm not a fan of playing that game, but here are a few thoughts on the overall controversy.

True gluttons for punishment who have read this far may want some recent minimum wage studies to look at. In this case at least, your wish is my command:

"Wages, Minimum Wages, and Price Pass-Through: The Case of McDonald’s Restaurants," by Orley Ashenfelter and Štěpán Jurajda (Princeton University Industrial Relations Section, Working Paper #646, January 2021). "We find no association between the adoption of labor-saving touch screen ordering technology and minimum wage hikes. Our data imply that McDonald’s restaurants pass through the higher costs of minimum wage increases in the form of higher prices of the Big Mac sandwich."

"Myth or Measurement: What Does the New Minimum Wage Research Say about Minimum Wages and Job Loss in the United States?" by David Neumark and Peter Shirley (National Bureau of Economic Research,  Working Paper 28388,  January 2021). "We explore the question of what conclusions can be drawn from the literature, focusing on the evidence using subnational minimum wage variation within the United States that has dominated the research landscape since the early 1990s. To accomplish this, we assembled the entire set of published studies in this literature and identified the core estimates that support the conclusions from each study, in most cases relying on responses from the researchers who wrote these papers.Our key conclusions are: (i) there is a clear preponderance of negative estimates in the literature; (ii) this evidence is stronger for teens and young adults as well as the less-educated; (iii) the evidence from studies of directly-affected workers points even more strongly to negative employment effects; and (iv) the evidence from studies of low-wage industries is less one-sided."

"Seeing Beyond the Trees: Using Machine Learning to Estimate the Impact of Minimum Wages on Labor Market Outcomes," by Doruk Cengiz, Arindrajit Dube, Attila S. Lindner and David Zentler-Munro (National Bureau of Economic Research Working Paper 28399, January 2021). "We apply modern machine learning tools to construct demographically-based treatment groups capturing around 75% of all minimum wage workers—a major improvement over the literature which has focused on fairly narrow subgroups where the policy has a large bite (e.g., teens). By exploiting 172 prominent minimum wages between 1979 and 2019 we find that there is a very clear increase in average wages of workers in these groups following a minimum wage increase, while there is little evidence of employment loss. Furthermore, we find no indication that minimum wage has a negative effect on the unemployment rate, on the labor force participation, or on the labor market transitions.

"The Budgetary Effects of the Raise the Wage Act of 2021," Congressional Budget Office (February 2021). "CBO projects that, on net, the Raise the Wage Act of 2021 would reduce employment by increasing amounts over the 2021–2025 period. In 2025, when the minimum wage reached $15 per hour, employment would be reduced by 1.4 million workers (or 0.9 percent), according to CBO’s average estimate. In 2021, most workers who would not have a job because of the higher minimum wage would still be looking for work and hence be categorized as unemployed; by 2025, however, half of the 1.4 million people who would be jobless because of the bill would have dropped out of the labor force, CBO estimates. Young, less educated people would account for a disproportionate share of those reductions in employment."