The Unfairness of Money Bail

About 40 years ago, when I was a junior on the high school debate team, we argued for the abolition of the money bail system. Like many positions taken by high school juniors in debate tournaments, our arguments were sweeping and simplistic. But we were correct in recognizing that there are real problems with money bail.

As one example, 14 elected prosecutors wrote a joint letter to New York state lawmakers on March 6, 2019.  The prosecutors  wrote:


We support ending money bail because safety, not wealth, should be the defining feature of the pretrial justice system. Three out of every four people in New York cannot afford to pay the bail amount that the judge sets at their arraignment. That means many people are jailed simply because they are too poor to purchase their freedom. … The only people who should be detained pretrial are those who a judge finds pose a specific, clear and credible threat to the physical safety of the community, or who are a risk of intentionally evading their court dates. Jails across New York frequently are over-capacity, and they are filled with people who do not need to be there. … Research shows that people who spend even a short period in jail, as opposed to being released pretrial, are more likely to commit a future crime. This makes sense. Jail is traumatizing. Jobs are lost. Families can’t pay rent. For reasons big and small, people who are away from their family, their job, and their community become more vulnerable and less stable.


Patrick Liu, Ryan Nunn, and Jay Shambaugh provide a useful backgrounder on this subject in "The Economics of Bail and Pretrial Detention," written for the Hamilton Project at the Brookings Institution (December 2018). Will Dobbie and  Crystal Yang have now offered "Proposals for Improving the U.S. Pretrial System," written as a Hamilton Project Policy (March 2019).  Here's an overview comment from the conclusion of the Liu, Nunn, and Shambaugh paper:


"Bail has been a growing part of the criminal justice system. Nonfinancial release has been shrinking, and more and more defendants are using commercial bonds as a way to secure their release while awaiting trial. Bail can make it more likely that defendants will reappear in court, and as such reduce costs for the criminal justice system. There are, however, extensive costs. Beyond the direct costs of posting the bail, either from paying a fee or having to liquidate assets, widespread use of bail has meant that many people are incarcerated because they are unable to post bail.

"Nearly half a million people are in jail at any given time without having been convicted of a crime. The overwhelming majority of these people are eligible to be released—that is, a judge has deemed that they are safe to be released—but are unable to raise the funds for their release. The impact of monetary bail falls disproportionately on those who are low-income, cannot post bail out of liquid assets, and thus often remain in jail for extended periods. Furthermore, as a growing body of literature has shown, the assignment of financial bail increases the likelihood of conviction due to guilty pleas, and the costs—to both individuals and society— from extra convictions can be quite high."

Let's spell some of this out more explicitly. 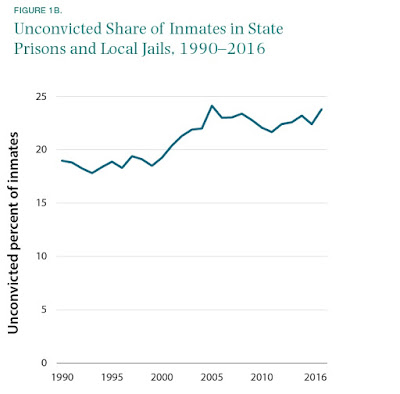 In the last few decades, the use of money bail has been rising. As Dobbie and Yang write (figures and references omitted):


The high rate of pretrial detention in the United States in recent years is largely due to the increasing use of monetary or cash bail—release conditional on a financial payment—and the corresponding decreasing use of release on recognizance (ROR), a form of release conditional only on one’s promise to return to the court. The share of defendants assigned monetary bail exceeded 40 percent in 2009 in the set of 40 populous U.S. counties where detailed data are available, an 11 percentage point–increase from 1990. The fraction of defendants released on their own recognizance decreased by about 13 percentage points over the same period in these counties, with only 14 percent of defendants being released with no conditions in 2009. The widespread use of monetary bail directly leads to high pretrial detention rates in most jurisdictions because many defendants are unable or unwilling to pay even relatively small monetary bail amounts. In New York City, for example, an estimated 46 percent of all misdemeanor defendants and 30 percent of all felony defendants were detained prior to trial in 2013 because they were unable or unwilling to post bail set at $500 or less.

The time that accused people spend in pretrial detention can be significant. Liu, Nunn, and Shambaugh write:


[T]the amount of time that a person is detained if they are unable to afford bail is substantial, ranging from 50 to 200 days, depending on the felony offense. The pretrial detention period is also growing ...  From 1990 to 2009, the median duration of pretrial detention increased for every offense, ranging from an increase of 34 percent for burglary to 104 percent for rape.  ... Even for durations that are relatively short—for example, 54 days for those accused of a driving-related felony—pretrial detention represents a nearly two-month period during which individuals are separated from their families and financial hardships are exacerbated. Moreover, the typical wait until trial is much longer in some places than others (e.g., 200 days in one sample of Pennsylvania counties).

Dobbie and Yang also point out that when it comes to international comparisons, the US locks accused people at a much higher rate before trial than other countries. This figure shows the number of people detained pre-trial per 100,000 population. The US is the tallest bar on the far right. 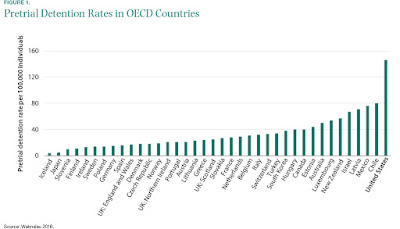 Sorting out the costs and benefits of different levels of pretrial detention isn't easy. The direct costs of holding people in jails and prisons is straightforward. But how many of those accused people would not have appeared before the court? If they did not appear for court, how would the cost of finding them have compared to the cost of locking them up for days--and in some cases for weeks or even months? What are the additional costs of being locked up in terms of loss of employment opportunities, or stresses on families? How many of those would have committed crimes if not detained? (And how comfortable are we as a society with locking people up not because they have been convicted of a crime, but because we suspect they might commit a crime in the future?) When thinking about conditions of pretrial release, judges are supposed to take all of this account: for example, the presumption that an accused person is innocent, the risk of the person not showing up for trial and the costs of finding them, the risk of the person committing another crime if they are not detained, the person's social ties to the community, the person's economic ability to put up a monetary bond.

To figure out the effects of different methods of pretrial detention, a social scientist might ideally like to take a large pool of people accused of crimes and conduct a randomized experiment, in which some randomly get offered differing levels of money bail, some are released on their own recognizance, and we see what happens. While it would be grossly inappropriate for the justice system to plan to operate in this way, it turns out that this randomized experiment is being conducted by reality.

Decisions about whether to offer bail, or at what level, are not made consistently across the judicial system. When there are multiple judges in a given court, some will tend to be tougher in granting bail and some will be easier, so whether defendants like it or not, they are living in a randomized experiment depending on the judge to whom they are randomly assigned. In addition, the evidence show that even the same judge will treat accused people with seemingly identical characteristics in the same way, which adds another element of randomness. Thus, research in this area can start by setting aside those who are essentially always granted bail or essentially never granted bail, and instead focus on those with seemingly identical characteristics who are more-or-less randomly granted bail in some cases but not in others.

Dobbie and Yang have been among the leading researchers in this area, and they describe the results of this research in their paper.  For example:

Those who are detailed pretrial are more likely to be found guilty, mainly because those who are detailed pretrial are more likely to take a plea bargain--which may include credit for time already served. Pretrial detention clearly reduces the risk of pretrial flight and pretrial crime, but at least in some studies, greater exposure to jail time before the trial is associated with a rise in posttrial crime. Defendants who because of the randomness ins the system are released pretrial, rather than being held pretrial, are more likely to have income and to be employed 2-4 years later.  In some jurisdictions, the randomness in the process of granting bail takes the form of racial disparities.

For those of us who aren't ready to take the plunge and eliminate the money bail system altogether, what might we do to move in the direction of reducing the use of money bail and rationalizing the system? Dobbie and Yang offer some proposals based on the existing research.

Some are pretty simple. When defendants are released on their own recognizance before trial, set up a system of text message or emails to remind them of their court date. For low-risk crimes, make greater use of writing citations, rather than arresting people, and when people are arrested, lean toward releasing them on their own recognizance. For those defendants where a higher degree of monitoring seems appropriate, make greater use of electronic or personal monitoring.

Some more complex proposals involve machine learning. It's now possible to plug the data on the characteristics of those who get bail, or are released on their recognizance, into a computer algorithm, which can look for patterns in those who are more or less likely to flee before trial, or more or less likely to commit crimes. The feedback based on studies can then be turned over to judges, so they have a systematic sense of  how they ruled in past similar cases, and how they compare with how other judges have ruled in similar cases. It's easy to feel queasy about this approach. Are we going to let the result of computer number-crunching play a substantial role in whether people are granted bail? But computer number-crunching may have greater clarity and consistency in its decisions than at least some judges, and could help produce results that both let more people out before trial while also leading to lower pretrial flight risks and crime. Pilot tests along these lines in jurisdictions willing to give it a try seem warranted.