A Wrap-Up for the TARP

"In October 2008, the Emergency Economic Stabilization Act of 2008 (Division A of Public Law 110-343) established the Troubled Asset Relief Program (TARP) to enable the Department of the Treasury to promote stability in financial markets through the purchase and guarantee of `troubled assets.'” The Congressional Budget Office offers a retrospective on how the controversial program all turned out in "Report on the Troubled Asset Relief Program—April 2019."

One issue (although certainly not the only one) is whether the bailout was mostly a matter of loans or asset purchases that were later repaid. A bailout that was later repaid might still be offensive on various ground, but at least it would seem preferable to a bailout that was not repaid.

As a reminder, TARP authorized the purchase of $700 billion in "troubled assets." The program ended up spending $441 billion. Of that amount, $377 billion was repaid, $65 billion has been written off so far, and the remaining $2 billion seems likely to be written off in the future. Here's the breakdown: 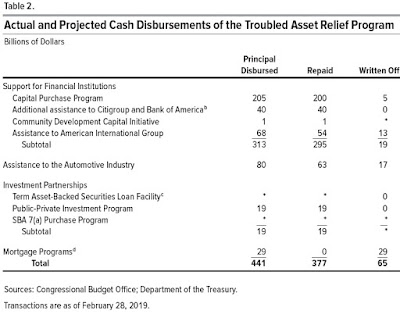 Interestingly, the biggest single area of TARP write-offs was not the corporate bailouts, but the $29 billion for "Mortgage Programs." The CBO writes: "The Treasury initially committed a total of $50 billion in TARP funds for programs to help homeowners avoid foreclosure. Subsequent legislation reduced that amount, and CBO anticipates that $31 billion will ultimately be disbursed. About $10 billion of that total was designated for grants to certain state housing finance agencies and for programs of the Federal Housing Administration. Through February 28, 2019, total disbursements of
TARP funds for all mortgage programs were roughly $29 billion. Because most of those funds were in the form of direct grants that do not require repayment, the government’s cost is generally equal to the full amount disbursed."

The second-largest category of write-offs is the $17 billion for the GM and Chrysler. Here's my early take on "The GM and Chrysler Bailouts" (May 7, 2012). For a look at the deal from the perspective of two economists working for the Obama administration at the time, see Austan D. Goolsbee and Alan B. Krueger," A Retrospective Look at Rescuing and Restructuring General Motors and Chrysler," in the Spring 2015 issue of the Journal of Economic Perspectives.

Not far behind is the bailout for the insurance company AIG. It lost $50 billion making large investments and selling insurance on financial assets base on the belief that the price of real estate would not fall. The US Treasury writes: "At the time, AIG was the largest provider of conventional insurance in the world. Millions depended on it for their life savings and it had a huge presence in many critical financial markets, including municipal bonds." A few years back, I wrote about  "Revisiting the AIG Bailout" (June 18, 2015), based in substantial part on "AIG in Hindsight," by Robert McDonald and Anna Paulson in the Spring 2015 issue of the Journal of Economic Perspectives.

Finally, the Capital Purchase Program involved buying stock in about 700 different financial institutions. Almost all of that stock has now been resold (about $20 million remains), and the government ended up writing off $5 billion overall.

Of these programs, I'm probably most skeptical about the auto bailouts, but even there, the risk of disruption from a disorderly bankruptcy, spreading from the companies to their suppliers to the surrounding communities, was disturbingly high. The purchases of stock in financial institutions, which may have been the most controversial step at the time, also came the closest to being repaid in full.

In the end, one's beliefs about whether TARP was a good idea depend on one's view of the US economy in October 2008. My own sense is that the US economy was in extraordinary danger during that month. B all means, let's figure out ways to improve the financial system so that future meltdowns are less likely, and I've argued "Why US Financial Regulators are Unprepared for the Next Financial Crisis" (February 11, 2019). But when someone is in the middle of having a heart attack, it's time for emergency action rather than a lecture on diet and exercise. And when an economy is in the middle of a severe and widespread financial meltdown, which had a real risk of turning out even worse than what actually happened, the government needs to accept that however its regulators failed in the past and need to reform in the future, emergency actions including bailouts may need to be used. I do sometimes wonder if the TARP controversy would have been lessened if more individuals had been held accountable for their actions (or sometimes lack of action) in the lead-up to the crisis.
Posted by Timothy Taylor at 9:00 AM