The Captain Swing Riots; Workers and Threshing Machines in the 1830s

"Between the summer of 1830 and the summer of 1832, riots swept through the English countryside. Over no more than two years, 3,000 riots broke out – by far the largest case of popular unrest in England since 1700. During the riots, rural laborers burned down farmhouses, expelled overseers of the poor and sent threatening letters to landlords and farmers signed by the mythical character known as Captain Swing. Most of all, workers attacked and destroyed threshing machines."

Bruno Caprettini and  Joachim Voth provide a readable overview of their research on the riots in "Rage against the machines New technology and violent unrest in industrializing England," written as a Policy Brief for the UBS International Center of Economics in Society (2018, #2). They write:

"Threshing machines were used to thresh grain, especially wheat. Until the end of the 1700s, threshing grain was done manually and it was the principal form of employment in the countryside during the winter months. Starting from the Napoleonic Wars (1803-1815), threshing machines spread across England, replacing workers. Horse-driven or water-powered threshers could finish in a matter of weeks a task that would have normally kept workers busy for months. Their use arguably depressed the wages of rural workers."

Here's a figure showing locations of the Captain Swing riots: 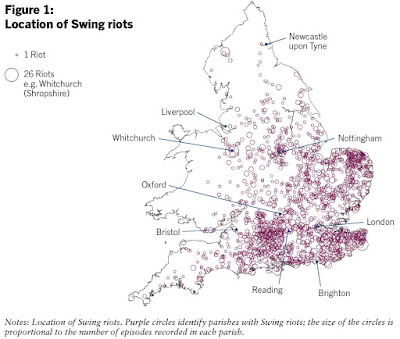 Thus, the authors also collect evidence on what areas were especially good soil for wheat, which makes using a thresher more likely, and what areas had water-power available to run threshers. it turns out that these areas are also where the threshers were more likely to be adopted. So a more plausible explanation seems to be that the new technology was adopted where it was most likely to be effective, not because of pre-existing local stroppiness.

The Captain Swing riots are thus one more example, an especially vivid one, that new technologies which cause a lot of people to lose a way of earning income can be highly disruptive. The authors write: "The results suggest that in one of the most dramatic cases of labor unrest in recent history, labor-saving technology played a key role. While the past may not be an accurate guide to future upheavals, evidence from the days of Captain Swing serve as a reminder of how disruptive new, labor-saving technologies can be in economic, social and political terms."
Posted by Timothy Taylor at 9:00 AM