Every few years, the OECD puts out an its Society at a Glance report. The later chapters offer  comparisons across high-income countries on a variety of economic, demographic, health, education, and social variables. For the 2019 edition, the first chapter is on the more specific topic,  "The LGBT challenge: How to better include sexual and gender minorities?" Here, I'll focus on labor market issues, but there is more in the chapter on other issues.

This figure summarizes the results of 46 studies of differences in employment and wages for LBGT people across the OECD countries. The usual method in these studies is to adjust for lots of observable factors: age, education, race/ethnicity, children in the household, hours worked, occupation/industry, location (like urban or rural), and so on.  The horizontal axis shows various groups. The figure then shows the gap that remains after adjusting for these factors, in employment rates, labor earnings, and the extent to which this group is found in high managerial roles. 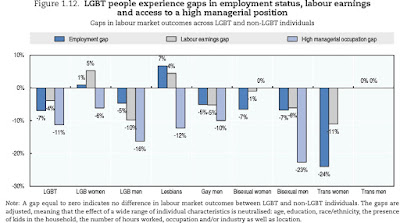 A common pattern in these studies is that gaps look worse for men than for women. Indeed, LGB women or just Lesbians as a group have positive employment and labor earnings gaps compared to the rest of the population.

As social scientists have long recognized, this kind of "gap" study suggests the presence of discrimination, but it doesn't prove either that discrimination exists or, just as important, it doesn't point to the main locus of discrimination. The "gap" doesn't measure anything directly: it's just what is left over after accounting for the other factors on which data existed.

Even if the gap does result from discrimination, a "gap" study is uninformative about whether the main force of that discrimination hits early in life, perhaps in treatment in schools and families, or whether it's mainly because of discrimination by employers later in life.  The OECD study offers a useful example: "For instance, the fact that lesbians and gay men in Sweden display lower employment rates in regions with more hostile attitudes toward homosexuals may simply reflect that more productive lesbians and gay men are more likely to move out of regions showing low acceptance of homosexuality."

Thus, it's common to complement "gap" studies with other methods that provide more direct evidence of discriminatory behavior. For example, in a "correspondence" study, the researcher sends out job applications to real job ads. The applications are functionally identical, except that some of the applications include evidence some information that could  lead an employer to infer sexual orientation or gender identity--say, listing a membership in a certain volunteer organization, or giving the name of a job candidate's partner in a way that is likely to lead to inferences about the sex of that partner.  The OECD describes the results of 13 studies across 10 countries taking this approach:


Homosexual female and male applicants are 1.5 times less likely to be invited to a job interview when sexual orientation is conveyed through their volunteer engagement or work experience in a gay and/or lesbian organisation. By contrast, insisting on the family prospects of female fictitious candidates by signalling homosexuality through the sex of the candidate’s partner leads to the virtual disappearance of hiring discrimination against lesbians. This pattern could reflect that employers attach a lower risk of maternity to lesbians relative to heterosexual women and are therefore less inclined to discriminate against them ...

Correspondence studies have also been done in the market for rental housing--that is, applying for apartments rather than jobs.


In the rental housing market, correspondence studies show that homosexual couples get fewer responses and invitations to showings from the landlords than heterosexual couples, a result mainly driven by male same-sex partners – see Ahmed, Andersson, & Hammarstedt (2008[38]) and Ahmed & Hammarstedt (2009[39]) in Sweden; Lauster & Easterbrook (2011[40]) in Canada; U.S. Department of Housing and Urban Development (2013[41]) in the United States and Koehler, Harley, & Menzies (2018[24]) in Serbia. In Serbia, for instance, almost one in five (18%) of same-sex couples were refused rental of an apartment by the landlord, while none of the opposite-sex couples were. This average result masks strong disparities by gender: 29% of male same-sex couples wererejected, as opposed to only 8% of female same-sex couples. The absence (or lower magnitude) of discrimination against female same-sex couples could flow from landlords’ well documented preference for female rather than male tenants (Ahmed, Andersson and Hammarstedt, 2008[38]). In this setting, the benefit of having two women as tenants could counterbalance the perceived cost of renting to a lesbian couple.


Other experiments create situations in which people who need help in some way: asking for money, or a "wrong number" or "lost letter" approach.

"In the United Kingdom, various experiments have also involved actors wearing a T-shirt with either a pro-gay slogan or without any slogan. These actors approach passers-by asking them to provide change. The findings point to less help provided to the ostensibly pro-gay person."

In the "wrong-number" approach, households get a call from someone who says their car has broken down, they are at a payphone, they are out of change, and now they have called a wrong number. They ask the person receiving the call to make a call to their boyfriend or girlfriend. Those who ask for a call to placed to someone of the opposite sex are more likely to get help than someone who asks for a call to be placed to someone of the same sex.

In the  “lost-letter technique,” a number of unmailed letters, with addresses and stamps are dropped in city streets. Some of the letters are addressed to LGBT organizations; some are not. Those that are not are more likely to be dropped in the mail by whoever finds them.

For most noneconomists, discrimination is just morally wrong, and that's enough. Economics can add that discrimination also leads to underuse and misallocation of society's human resources, which imposes costs on the economy as a whole.
Posted by Timothy Taylor at 9:00 AM