"The Federal Government is the Nation’s largest employer, and its footprint is global. The total workforce comprises approximately 2.1 million non-postal civilian workers and 1.4 million active duty military, as well as approximately one million military reserve personnel serving throughout the country and the world. The postal workforce includes an additional 500,000 employees. Approximately 85 percent of the Federal workforce, or 1.7 million people, live outside of the Washington, D.C., metropolitan area. Notably, an even larger “indirect” workforce carries out much of the work paid for by Federal funds. This includes Federal contractors and State, local, and nonprofit employees whose jobs are funded by Federal contracts, grants and transfer payments."

This reminder is from Chapter 5 of the Analytical Perspectives volume published with the proposed FY 2020 budget from the Trump Administration. In any given year, a lot of what is in the Analytical Perspectives volume is just an update of the previous year. But the topic of federal employee pay gets more than a quick update; it's an announcement that the Trump administration plans to push on the topic of federal employee pay in the next couple of years.

Here are some background figures from the budget documents. The first two figures compare education levels for federal workers and the private-sector workers, and how they have evolved over time. The first figure shows that the share of federal workers with at least a master's degree has roughly doubled from 15 to 30% since 1990. In the private sector, the share of workers with a master's degree is less than half this level, although also rising over time. 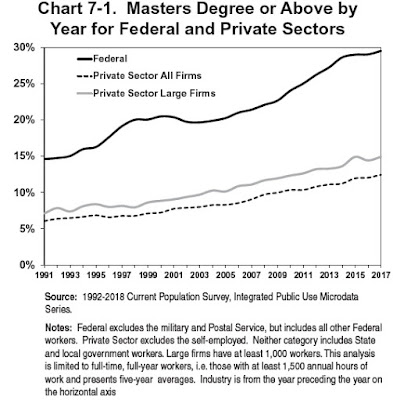 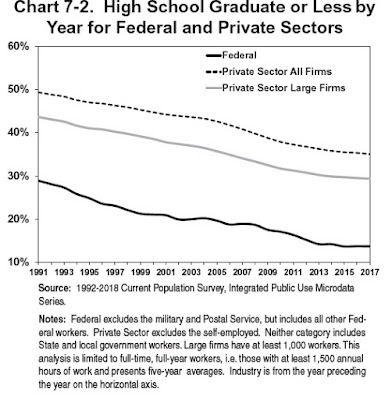 The patterns suggest a real disjunction between federal and private-sector workers. For at least some readers, it may come as a surprise to recognize that 40% of private-sector workers in the US have a high school degree or less. hat seems like a real-world solution, or a useful process of paperwork and forms, might look rather different to members of these two workforces.

Federal workers tend to be significantly older, too. 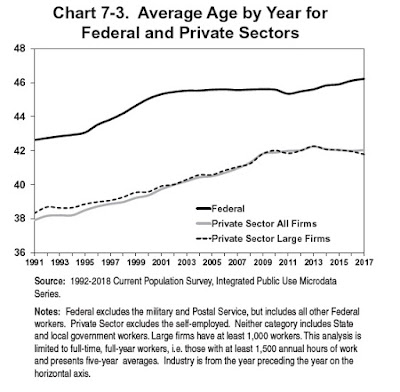 Comparing the compensation of federal and private-sector workers isn't straightforward. A full analysis would need to take into account take-home pay, benefits, differences in skill levels, and likelihood of being fired or being able to stay on the job as long as you want. The budget document point to a study by the Congressional Budget Office:

This general pattern that wages for federal employees are similar to the private sector, given education level, but benefits are higher for government workers, goes back a few years: for example, I laid out the pattern in a blog post in 2012. budget reproduces a chart from the 2017 CBO study. It separates the workforce into five groups by education level. For each group, the left-hand bar show wages and benefits for federal workers, while the right-hand bar shows wages and benefits for private-sector workers. Again, wages are fairly similar, but retirement and health benefits are clearly better for the federal workers. 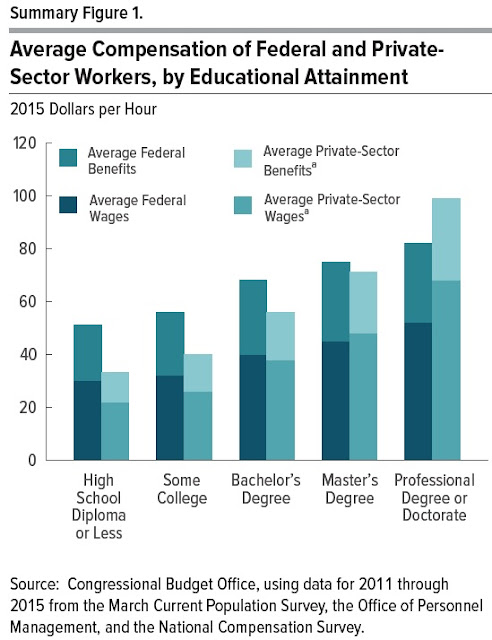 The budget document discusses a variety of changes to federal pay: having employees contribute more to their retirement benefits; fewer days off for federal employees, but more flexibility in which days can be taken off; fewer across-the-board pay increases, and more merit increases; greater hiring of "term" federal employees who spend a few years in the government before heading back to the private sector; and more. These kinds of proposals for adjusting federal employee pay are fairly common, but they often tend to end up on that long list of perhaps-useful-but-not-necessarily-right-now topics that never quite make it into law.
Posted by Timothy Taylor at 10:28 AM