When US Market Access is No Longer a Trump Card

For a sense of the shift, consider this figure from chapter 4 of the most recent World Economic Outlook report, published by the IMF (April 2019). The lines in the figure show the trade flows between countries that are at least 1% of total world GDP. The size of the dots for each country is proportionate to the country's GDP.

In 1995, you can see international trade revolving around the United States, with another hub of trade happening in Europe and a third hub focused around Japan.  Trade between the US and China shows up on the figure, but China did not have trade flows greater than 1% of world GDP with any country other than the US.

The picture is rather different in 2015. The US remains an international hub for trade. Germany remains a hub as well, although fewer of its trade flows now exceed 1% of world GDP. And China has clearly become a hub of central importance in Asia. 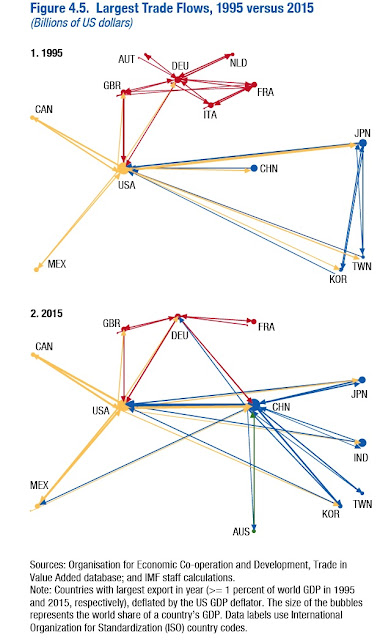 The patterns of trade have also shifted toward greater use of global value chains--that is, intermediate products that are shipped across national borders at least once, and often multiple times, before they become final products. Here's the overall pattern since 1995 of falling tariffs and rising participation in global value chains for the world economy as a whole. 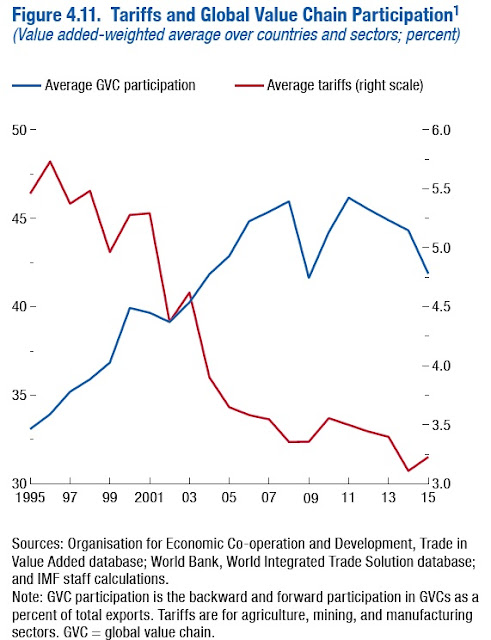 Several decades ago, emerging markets around the world worried about having access to selling in US and European markets, and this market access could be used by the US and European nations as a bargaining chip in economic treaties and more broadly in international relations. Looking ahead, US production is now more tied into global value chains, and the long-term growth of US manufacturing is going to rely more heavily on sales to markets outside the United States.

For example, if one is concerned about the future of the US car industry, the US now produces about 7% of the world's cars in 2015, and about 22% of the world's trucks. The future growth of car consumption is going to be primarily outside the US economy. For the health and long-term growth of the US car business, the possibility of unfair imports into the US economy matters a lot less than the access of US car producers to selling in the rest of the world economy.

The interconnectedness of global value chains means that General Motors already produces more cars in China than it does in the United States. In fact, sales of US multinationals now producing in China are already twice as high as exports from the US to China. Again, the long-term health of many US manufacturers is going to be based on their ability to participate in international value chains and in overseas production.

Although what caught my eye in this chapter of the World Economic Outlook report was the shifting patterns of world trade, the main emphases of the chapter are on other themes that will come as no surprise to faithful readers of this blog.  One main theme is that shifts in bilateral and overall trade deficits are the result of macroeconomic factors, not the outcome of trade negotiations, a theme I've harped on here (for example, here, here, and here).

The IMF report also offers calculations that higher tariffs between the US and China will cause economic losses for both sides. From the IMF report:


US–China trade, which falls by 25–30 percent in the short term (GIMF) and somewhere between 30 percent and 70 percent over the long term, depending on the
model and the direction of trade. The decrease in external demand leads to a decline in total exports and in GDP in both countries. Annual real GDP losses range from –0.3 percent to –0.6 percent for the United States and from –0.5 percent to –1.5 percent for China ... Finally, although the US–China bilateral trade deficit is reduced, there is no economically significant change in each country’s multilateral trade balance.

Some advocates of higher tariffs take comfort in noting that the estimated losses to China's economy are bigger than the losses to the US economy.  Yes, but it's losses all around! As the 21st century economy evolves, the most important issues for US producers are going to involve their ability to
compete in unfettered ways in the increasingly important markets outside the US.
Posted by Timothy Taylor at 10:56 AM