The Utterly Predictable Problem of Long-Run US Budget Deficits

For anyone who can do arithmetic, it did not come as a surprise that the "baby boom generation," born from 1946 up through the early 1960s, started turning 65 in 2010. Here's the pattern over time of the "Daily Average Number of People Turning 65." The jump of the boomer generation is marked.

Because two major federal spending programs are focused on older Americans--Social Security and Medicare--it has been utterly predictable for several decades that the long-run federal budget situation would come under strain at about this time. That figure comes from a report by the US Government Accountability Office, "The Nation’s Fiscal Health Action Is Needed to Address the Federal Government’s Fiscal Future" (April 2019).

Here's a breakdown of the GAO predictions on federal spending for the next 30 years. The "all else" category bumps up about 0.6% of GDP during this time, and normal politics could deal with that easily enough. Social Security spending is slated to bump up about 1% of GDP, which is a bigger problem. Still, some mixture of limits on benefits (like a later retirement age) and a modest bump in the payroll tax rate could deal address this. Indeed, it seems to me an indictment of the US political class, from both parties, that no forward-looking politician has built a movement around steps to "save Social Security." 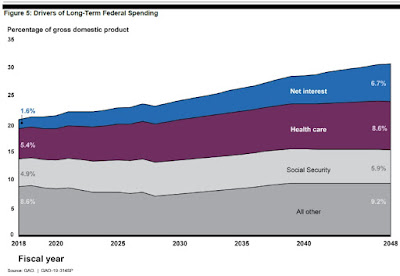 But the projected rise in government health care spending of 3.2% of GDP is a challenge that no one seems to know how to fix. It's a combination of the rising share of older people, and in particular the rising share of the very-old who are more likely to face needs for nursing home and Alzheimer's care, combined with an overall trend toward higher per person spending on health care. As I've noted before, every dollar of government health care spending represents both care for a patient and income for a provider, and both groups will fight hard against cutbacks.

As a side note, I thought a figure in the GAO report showing who holds US debt was interesting.  The report notes:


Domestic investors—consisting of domestic private investors, the Federal Reserve, and state and local governments—accounted for about 60 percent of federal debt held by the public as of June 2018, while international investors accounted for the remaining 40 percent. International investors include both private investors and foreign official institutions, such as central banks and national government-owned investment funds. Central banks hold foreign currency reserves to maintain exchange rates or to facilitate trade. Therefore, demand for foreign currency reserves can affect overall demand for U.S. Treasury securities. An economy open to international investment, such as the United States, can essentially borrow the surplus of savings of other countries to finance more investment than U.S. national saving would permit. The flow of foreign capital into the United States has gone into a variety of assets, including Treasury securities, corporate securities, and direct investment. 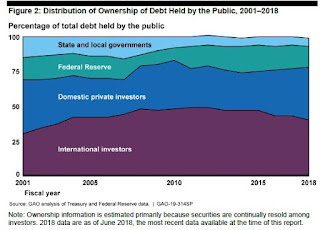 The arguments for restraint on federal borrowing are fairly well-known. There's the issue that too much debt means less ability to respond to a future recession, or some other crisis. There's an issue that high levels of federal borrowing soak up investment capital that might have been used more productively elsewhere in the economy. There's a concern that federal borrowing is financing a fundamental shift in the nature of the federal government: it used to be that most of government spending was about making investments in the future--infrastructure, research and development, education, and so on--but over the decades it has become more and more about cutting checks for immediate consumption in spending programs.

But at the moment, I won't argue for this case in any detail, or offer a list of policy options. Those who want to come to grips with the arguments should look at William Gale's just-published book, Fiscal Therapy: Curing America's Debt Addiction and Investing in the Future,  For an overview of Gale's thinking, a useful starting point is the essay "Fiscal therapy: 12 framing facts and what they mean" (Brookings Instution, April 3, 2019).

Of course, I personally like some of Gale's proposals better than others. But overall, what I really like is that he takes the issue of rising government debt in the long-run seriously, and takes the responsibility of offering policy advice seriously. He doesn't wave his hands and assume that faster economic growth will bring in additional waves of tax revenue; or that "taxing the rich" is a magic elixir; or that the proportion of older people who are working will spike upward; or that we can ignore the deficit for five or ten or 15 years before taking some steps; or that government spending restraint needs nothing more than avoiding duplication, waste, and fraud. He uses mainstream estimates and makes concrete suggestions. For an outside analysis of his recommendations, John Ricco, Rich Prisinzano, and Sophie Shin run his proposals through the Penn Wharton Budget Model in "Analysis of Fiscal Therapy: Conventional and Dynamic Estimates (April 9, 2019). 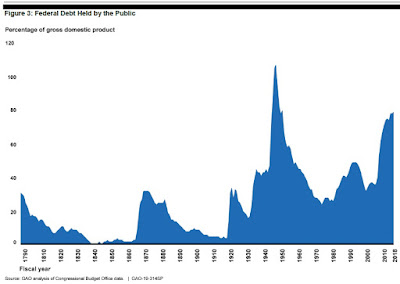 But the aging of the US population and rising health care spending are going to take federal spending and deficits to new (peacetime) levels. On the present path, we will surpass the previous high of federal debt at 106% of GDP in about 15-20 years. It would b imprudent to wait and see what happens.
Posted by Timothy Taylor at 9:00 AM