Building Worker Skills in a Time of Rapid Technological Change

I'm congenitally suspicious of "this time is different" arguments, which often seem very quick to toss out historical experience for the sake of a lively narrative. So when I find myself in discussions of  whether the present wave of technological change is unprecedented or unique, I often end up making the argument that while the new technologies are obviously different in their specifics from older technologies, the fact of technology leading to very dramatic disruptions of labor markets is not at all new. To me, the more interesting questions are question how the economy, government, and society react to that ongoing pattern of technological change.

Conor  McKay, Ethan Pollack, and Alastair Fitzpayne offer a useful broad overview of these issues in "Automation and a Changing Economy," a two-part report written for the Aspen Institute Future of Work Initiative (April 2019). The first volume focuses on the theme "A Case for Action," with background on how technological change and automation has affected labor markets over time, while the second volume is "Polices for Shared Prosperity," with a list of policy options.

It may turn out to be true that the current wave of technological innovation is uniquely different in some ways. (It's very hard to disprove that something might happen!)  But it's worth taking a moment to acknowledge that technologies of the past severely disrupted the US labor market, too. For example, here's a figure showing shifts in the pattern of US jobs over time: the dramatic rise in white-collar jobs, with falls in other areas. 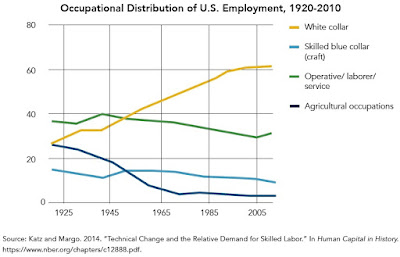 And of course if one goes beyond broad skill categories and looks in more detail at jobs, the necessary skill mix has been changing quite substantially as well. Remember that in the 1970s, word-processing was mostly on typewriters; in the 1980s, written communications involves mail, photocopying, and sometimes fax machines; in the 1990s, no one carried a smartphone. It's not just changes in information technologies and the web, either. Workers across manufacturing and services jobs have had to learn how to use new generations of  physical equipment as well.

Of course, we can noodle back and forth over how new technologies might have bigger effects on labor markets. The report has some discussion of these issues, and dinner parties for economists have been built on less. But the lesson I'd take away, to quote from the report, is: "Automation need not be any more disruptive in the future than it has been in the past to warrant increased policy intervention."

One key issue in navigating technological change is how workers can obtain the skills that employers want. And here a problem emerges, which is that although employers were a primary source of such training in the past, they have backed away from this role. The report notes (footnotes omitted):


Employers traditionally have been the largest source of funding for workforce training, but businesses are training fewer workers than in the past. From 1996 to 2008, the percentage of workers receiving employer-sponsored or on-the-job training fell 42 percent and 36 percent, respectively. This decline was widespread across industries, occupations, and demographic groups. ...  More recent data on employer-provided training has been mixed. Data from the Society for Human Resource Management suggests that employer-provided tuition assistance has been falling in recent years, from 66 percent of surveyed businesses offering tuition assistance benefits in 2008 down to 53 percent in 2017. Meanwhile, data from the Association for Training & Development suggests that employer training investments have been roughly flat over the last decade. ...

Public sector investment has declined, too. For example, WIOA Title I state grants, which fund the core of the federal workforce development system, have been cut by over 40 percent since 2001. The program is currently underfunded by $367 million relative to its authorized levels. Government spending on training and other programs  to help workers navigate job transitions is now just 0.1 percent of GDP, lower than all other OECD countries except for Mexico and Chile, and less than half of what it was 30 years ago.

Why have employers backed away from providing training? The report notes:

Without intervention, business investment in workers may continue to decline. In a recent Accenture survey of 1,200 CEOs and other top executives, 74 percent said that  they plan to use artificial intelligence to automate tasks in their workplace over the next three years. Yet only three percent reported planning to significantly increase investments in training over the same time period.

In part, the decline in employer-provided training can be explained by changes in the employer-employee relationship over the past forty years. ... If businesses plan to retain employees over a long period, they will benefit more directly from their training investments. But as relationships between workers and businesses become less stable and short-term, businesses have a difficult time capturing the return on their training investments. The result is less investment in training even as the workforce requires greater access to skills training.

Recent legislation could accelerate this trend. Businesses often have to choose between using workers or machines to accomplish a task. The 2017 Tax Cuts and Jobs Act allows businesses to immediately expense the full cost of equipment purchases—including automation technology—rather than deduct the cost of the equipment over a period of time. By reducing the after-tax cost of investing in physical capital but not providing a similar benefit for investments in human capital, the legislation may further shift business priorities away from worker training.

There are a number of ways one might seek to rebuild connections between employers and job training. The report suggests an employer tax break for spending money on employee training, similar to the tax break now given for investing in research and development. A complementary approach would be to build through a dramatic expansion of the community college system, which has the advantage that it can train workers for an multiple-employer industry that is locally prominent. Yet another approach is a considerable expansion of apprenticeships. Yet another approach would be much greater support for "active labor market policies," that assist workers with job search and training.

A lot of the concern over adapting to technological change, and whether the economy is providing "good jobs" or devolving toward alternative "gig jobs," seems to me rooted in concerns about the kind of attachment that exists between workers and employers.  It relates to the extent that workers feel engaged with their jobs, and to whether the worker and employer both have a plausible expectation that the job relationship is likely to persist for a time--allowing both of them to invest in acquiring skills with the possibility (or likelihood?) of a lasting connection in mind.

Ultimately, it will matter whether employers view their employees as imperfect robots, always on the verge of being  replaced when the better robots eventually arrive, of whether they view their employees as worthy of investment in themselves. It's the difference between automation replacing workers, or complementing them.
Posted by Timothy Taylor at 12:17 PM