US Attitudes Toward Federal Taxes: A Rising Share of "About Right"

The Gallup Poll has been asking Americans since the 1950s whether they think that the income tax they pay is "too high" or "about right." The figure shows the responses over time including the 2019 poll, taken in early April. (The "don't know" and the "too low" answers are both quite small, and are not shown on the figure.) 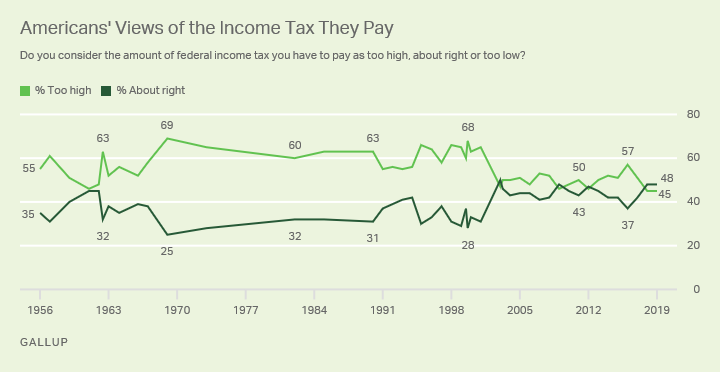 In more detailed questions, the Gallup poll also asks different income groups, and whether they are paying too much, a fair amount, or too little. Unsurprisingly, the general sentiment is that those with upper income levels could pay more. But there are some patterns I wouldn't necessarily have expected in the results, as well. Here are the results for what people think about what upper-income people are paying in federal taxes (for readability, I omitted the 2-4% in the "don't know" column): 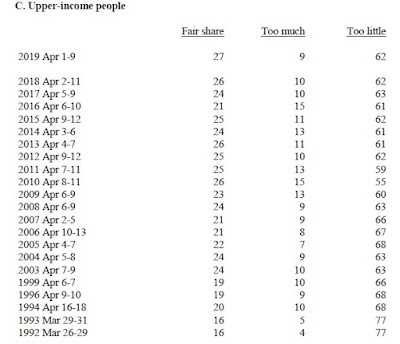 Here's the pattern for federal taxes paid by middle-income people: 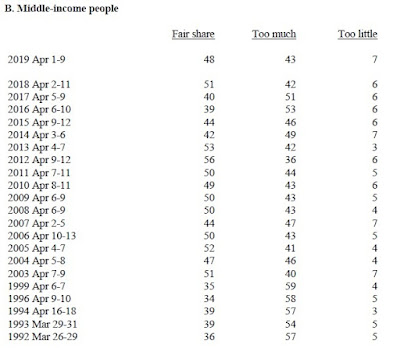 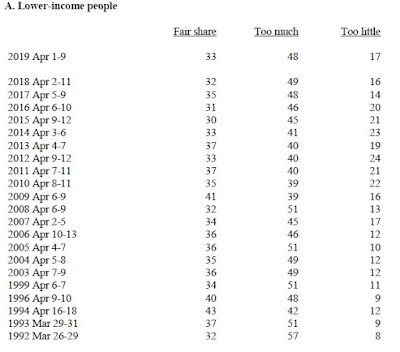 Of course, questions about whether a tax code is fair are going to be influenced by political partisanship. For example, here are some poll responses from the Pew Research Center. Their polling shows that the share of American thinking the federal tax system is very or moderately fair rose overall slightly in the last year overall. However, this modest overall rise is a result of Republicans being much more willing to say the tax system is fair than at any time in the last 20 years, and Democrats being much less willing to say so.

As I've pointed out in the past, poll responses on economic questions like whether free trade offers benefits are also influenced dramatically by political preferences. During the past couple of years, as President Trump has inveighed against international trade and called for protectionism, Democrats have suddenly become much more positive about trade. One suspects that this pattern emerged more from anti-Trump feeling than from increased time spent reading economics textbooks.