Globalization: More Than Before, But Less than You Think?

Globalization can be loosely defined as increases in the flow of goods, services, finance, people, and information across national boundaries. It has been generally on the rise in recent decades, although this trend experienced a substantial hiccup around the time of the Great Recession. Steven A. Altman, Pankaj Ghemawat, and Phillip Bastian have written  "DHL Global Connectedness Index 2018: The State of Globalization in a Fragile World" (February 2019). Most of the report is country- and region-level descriptions of the level globalization.

Here, I draw on the first chapter which tackles the overview question, "How Globalized is the World?" One of the themes:

"Surprisingly, one commonality between globalization’s supporters and its critics is that both tend to believe the world is already far more globalized than it really is. ...  The world is both more globalized than ever before and less globalized than most people perceive it to be. The intriguing possibility embodied in that conclusion is that companies and countries have far larger opportunities to benefit from global connectedness and more tools to manage its challenges than many decision-makers recognize."

The authors point to survey data on what people believe about globalization, compared to the actual data. Here are the results of a survey of business managers (footnotes omitted):

Figure 1.1 also highlights how managers tend to greatly overestimate measures of the depth of globalization. The actual levels are juxtaposed on the graph against perceived levels from a survey of 6,035 managers across three advanced economies (Germany, the UK, and the US) and three emerging economies (Brazil, China, and India) that we conducted in 2017. On average, the managers guessed that the world was five times more deeply globalized than it really is! In fact, their perceptions were no more accurate than those of students surveyed across 138 countries or members of the general public in the United States. And CEOs and other senior executives had even more exaggerated perceptions than did junior and middle managers—perhaps because their own lives tend to be far more global than those of their employees and customers. 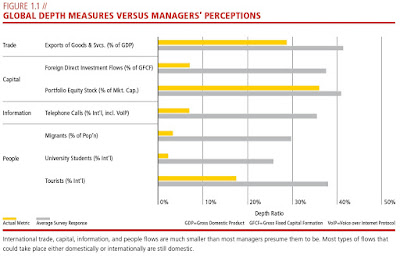 Thus, some of the discussion in the report emphasizes that most economic activity is domestic, even for multinational firms.

The combined output of all multinational firms outside of their home countries added up to only 9% of global economic output in 2017, and just 2% of all employees around the world worked in the international operations of multinational firms. In part, those statistics reflect the fact that most companies are still domestic. Less than 0.1% of all firms have foreign operations and about 1% export. Small firms are, on average, much less international than large ones, and most companies are small. But even among the Fortune Global 500, the world’s largest firms by revenue, domestic sales still exceed international sales. ... The same pattern of limited breadth prevails at the firm level as well. Among the world’s 100 largest corporations ranked by foreign assets, the average firm earns roughly 60% of its revenue in just four countries (home plus three international markets).

Although the buzzword is "globalization," what this typically means in practice is trade with a few neighbors who are geographically close, or share the same language, or both.

Geographic distance, along with cultural, administrative/ political, and economic differences go a long way toward explaining the distributions of countries’ flows across locations. For example, if one pair of countries is half as distant as another otherwise similar pair of countries, greater physical proximity alone would be expected to increase the merchandise trade between the closer pair by more than three times and to more than double the stock of foreign direct investment (FDI) between them. And to highlight a cultural commonality, sharing a common official language roughly doubles both trade and foreign direct investment. Thus, despite the widespread perception that advances in transportation and telecommunications technologies are rendering distance irrelevant, international activity continues to be more intense among proximate countries.

The chapter also has some intriguing hints about future directions for globalization. One possibility is an expansion of international flows beyond the closest neighbors and those with common languages, and so that more small companies become involved. Globalization is not close to any theoretical ceiling.

On the other hand, trade growth might be slowed by developments that would reduce the attraction of trade motivated by labor cost arbitrage. Automation and 3-D printing could potentially reduce the attraction of offshoring to access low labor costs. And macroeconomic trends imply some narrowing of the scope for such trade as well. One very rough measure of the potential for labor cost arbitrage across countries is the GDP-weighted average of the ratios of countries’ per capita incomes (higher over lower). As large emerging economies (especially China) have become richer, this ratio has already fallen from 8 in 2001 to 5.6 in 2017, and projections from Oxford Economics suggest it will continue falling (more slowly) to about 4 by 2050. While wage arbitrage will continue to motivate trade, exports of labor-intensive products from emerging economies may become a smaller driver of trade growth than in the recent past.

On a global basis, migration is on a rising trend, but a very modest one. ... The proportion of people living outside of the countries where they were born has risen from 2.8% in 2001 to 3.4% in 2017. Both of those values, however, still round to 3%—the same level that global migration depth has approximated for more than a century!The modest global increase in international migration,  however, masks significant increases that have taken place in some countries. In advanced economies, the share of immigrants in the population increased from 9% in 2001 to 13% in 2017. In the United States, 2017 was noteworthy as the year that the proportion of immigrants in the population first surpassed its 1910 peak level.

Thus, the globalization of the future could follow a path where the ties across information, ideas, finance, and people are rising briskly, but the share of actual goods moving across national borders rises much more slowly. Altman, Ghemawat, and Bastian write:

To summarize, the depth and breadth of trade, capital, information, and people flows—as well as the international business activity of multinational firms—fall far short of levels that are commonly presumed. National borders and the distances and differences between countries still have large dampening effects on international activity.