Why Did the US Labor Share of Income Fall So Quickly?

The share of US national income going to labor was sagging through the second half of the century, but then plunged starting around 2000. The McKinsey Global Institute takes "A new look at the declining labor share of income in the United States" in a report by James Manyika, Jan Mischke, Jacques Bughin, Jonathan Woetzel, Mekala Krishnan, and Samuel Cudre (May 2019). 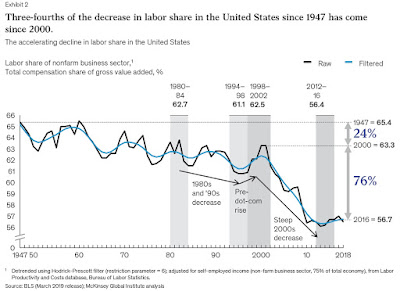 Why did this happen? The MGI analysis looks at 12 different sectors of the economy and how different possible explanations played out in these sectors. As they point out, these sectors all experienced a decline in labor share, but the sectors as a whole make up less than half of total US output, and tend to be "more globalized, more digitized, and more capital-intensive than the overall economy." Thus, factors that might affect the labor share like globalization, growth of the digital economy, and substituting capital for labor are likely to play a bigger role in these sectors than in the rest of the economy.

But here's their ranking of five main causes for the decline in labor's share of income:


We find that that the main drivers for the decline in the labor share of income since 1999 are as follows, starting with the most important: supercycles and boom-bust (33 percent), rising depreciation and shift to IPP capital (26 percent), superstar effects and consolidation (18 percent), capital substitution and technology (12 percent), and globalization and labor bargaining power (11 percent)

The list is intriguing and a little surprising, because some of the factors most commonly discussed as potential causes of the decline in labor share--globalization, capital substituting for labor, and "superstar" firms emerging from industry consolidation--play a relatively smaller role. One possible interpretation is that sharp drop in labor income from 1999-2016 was a little deceptive, because in part it was based on cyclical factors, but a number of the factors underlying a longer-term decline in labor share continue to operate.

On the topic of supercycles and boom-bust, the MGI report says:


"Even after adjusting for depreciation, we estimate that supercycles and boom-bust effects—particularly in extractive industries and real estate—account for one-third of the surge in gross capital share since the turn of the millennium. In two sectors, mining and quarrying and coke and refined petroleum, capital share increases were led by increased returns on invested capital and higher profit margins during a sharp and prolonged rise in prices of metals, fuels, and other commodities fed by China’s economic expansion in the 2000s. ... Housing-related industries also contributed. The capital-intensive real estate sector grew in importance in terms of gross value added during the bubble, leading to a substantial mix effect raising the capital share of income."

On the topic of rising depreciation and shift to intangible capital, they write:

Higher depreciation is the second-largest contributor to the increase in gross capital share, accounting for roughly one-fourth  (26 percent) of the total. Depreciation matters for labor share analyses, because the  baseline, GDP, is a “gross” metric before depreciation; if more capital is consumed during the production process, there is less net margin to be distributed to labor or capital. This fact, which receives little attention in the literature, is particularly visible in manufacturing, the public sector, primary industries, and infrastructure services. One reason depreciation has become such a large factor in driving up the capital share is the increase in the share of intellectual property products capital—software, databases, and research and development—which depreciates faster than traditional capital investments such as buildings. The increase has been substantial: the share of IPP capital rose from 5.5 percent of total net capital stock for the total economy in 1998 to 7.3 percent in 2016, an increase of almost 33 percent.

On the topic of  superstar effects and consolidation:

We estimate that superstar effects contribute about one-fifth of the capital share increase. We base this estimate on analyzing which industries actually saw an increase in ROIC [return on investment capital] as a direct driver of capital share increases and where the increase goes hand-in-hand with (and may partially result from) rising consolidation or rise of superstar firms. Such patterns seemed particularly pronounced in several industries, and for each of them, superstar effects were marked as a “highly relevant” or “relevant” driver. Telecommunications, media, and broadcasting, for instance, experienced significant rises in returns. The transportation and storage industry went through another round of  airline consolidation and recovered from the crisis to ROIC levels that are high by historical standards. The pharmaceutical and chemicals as well as information and computer services sectors are also known for superstar effects. Finally, wholesale and retail as well as refining also went through a spurt in returns and consolidation.

On the topic of capital substitution and technology:

On the topic of globalization and labor bargaining power:

One of the most discussed reasons for labor’s declining share of income—the weakening of labor bargaining power under pressure from globalization—is, in our analysis, not as important as other factors for the total economy in the time frame we focus on. It explains 11 percent of the overall decline. ... Globalization and labor bargaining power did have a very large and visible impact in a few of our selected sectors. A prime example is automobile manufacturing, where declining union coverage and falling wages as production shifted to the southern United States and Mexico increased the capital share. ... To a lesser extent, the computer and electronics sector, which contributed 9 percent to the total increase in capital share, was also affected by growing globalization of supply chains and offshoring, although other factors played an important role for this sector. Finally, the numerous remaining smaller manufacturing industries not among the 12 sectors we extensively analyze have probably been affected by globalization, and more specifically by the rise of China as a major trade hub since its accession to the World Trade Organization in 2001.

You can read the report for the sector-by-sector analysis, and consider how the factors might affect the sectors of the economy outside the focus of this report. But again, because the sector on which they focus are "more globalized, more digitized, and more capital-intensive than the overall economy," globalization, growth of the digital economy, and substituting capital for labor are less likely to be major factors in the rest of the economy than in these sectors.
Posted by Timothy Taylor at 11:06 AM