The monthly unemployment rate in April fell to 3.6%, the lowest monthly rate since December 1969. It's now been a 4.0% or less for more than a year. But in this generally quite positive employment environment, low-skill male workers have been an ongoing sore spot. The issues are discussed in a three-paper symposium in the Spring 2019 issue of the Journal of Economic Perspectives:

Binder and Bound set the stage:

During the last 50 years, labor market outcomes for men without a college education in the United States worsened considerably. Between 1973 and 2015, real hourly earnings for the typical 25–54 year-old man with only a high school degree declined by 18.2 percent,1 while real hourly earnings for college-educated men increased substantially. Over the same period, labor-force participation by men without a college education plummeted. In the late 1960s, nearly all 25–54 year-old men with only a high school degree participated in the labor force; by 2015, such men participated at a rate of 85.3 percent. 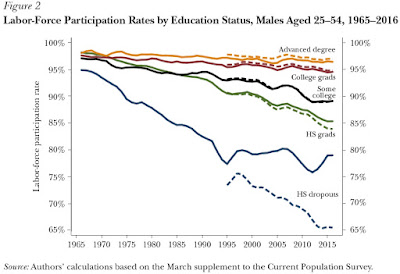 This drop-off in labor force participation has been accompanied by a wave of other symptoms, as discussed in the paper by Coile and Duggan. As one example, consider mortality rates for prime-age men, using their table. 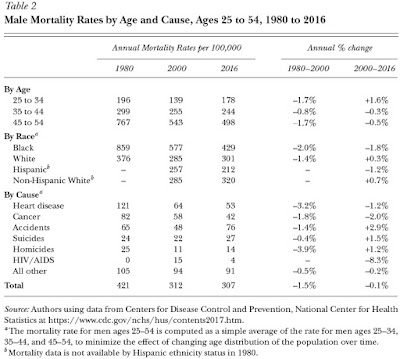 The overall mortality rate for men (bottom row) dropped dramatically from 1980 to 2000, but barely budged from 2000-2016. In particular, from 2000-2016, the mortality rate rose for men age 25-34 and for white men in the 25-age group as a whole. Looking at cause of death, there are big falls in death rates for prime-age men from heart disease and cancer in the 1980s and 1990s, but much smaller falls since then. Meanwhile, death rates for this group from accidents, suicides, and homicides went up from 2000-2016. Data on cause of death doesn't include education level, but the authors go on to show that in areas with lower education levels, these rises in death rates were more pronounced.

When Coile and Duggan look instead at reporting of health problems, they find:

"There is a steep health gradient with respect to education—within each age group, the share in fair or poor health is roughly 2.5 times as large for men with a high school education or less than for men with some college or more. Men with less education are similarly more likely to report having a work-limiting disability, limitations in physical activity or ADLs/IADLs [Activities of Daily Living or Instrumental Activities of Daily Living], and obesity ...  Men’s health ... is getting worse over time. ... [T]he fraction of men reporting a health problem is higher in 2015 than in 2000 in nearly every case."

Marriage rates have been on a generally downward trend as well, although the drop-off from 2000 to 2016 is a lot smaller than the fall for the 1980-2000 period. Here's an illustrative table from Coile and Duggan: 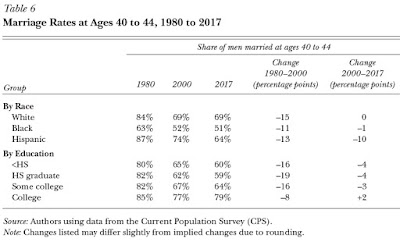 In some general way, all of these factors seems to combine into a shadowy picture. Low-skill men are working less, reporting worse health, were for a time more likely to be locked up, and seem less likely to form family ties. How do these factors connect?

On its own, falling labor demand does not sufficiently explain the secular decline in less-educated male labor-force participation—at least, not without allowing for substantial adjustment frictions in the long run as well as the short run. Rising access to Disability Insurance is at most a partial explanation for the 45–54 year-old group and matters quite little for younger men and for high school dropouts. Rising exposure to prison may be a significant factor for dropouts and for blacks without college education, but labor-force participation for these groups began declining decades before prison populations skyrocketed. Certainly no single explanation can sufficiently explain the decline, and even in combination, the explanations appear insufficient.

We suspect that there is another factor at play. We will argue that the prospect of forming and providing for a new family constitutes an important male labor supply incentive; and thus, that developments within the marriage market can influence male labor-force participation. A decline in the formation of stable families produces a situation in which fewer men are actively involved in family provision or can expect to be involved in the future. This removes a labor supply incentive; and the possibility of drawing support from one’s existing family ... creates a feasible labor-force exit.

The paper by Edin, Nelson, Cherlin and Francis is by a group of sociologists, based on in-depth interviews with working-class men who have children but are not married to the mothers and do not live with them. They argue that low-skilled men are often trying to renegotiate their relationship to jobs, family and religion--but that many of them are in a social setting where these attempts lead to "haphazard lives." They write (citations omitted):

[W]e show that working-class men are not simply reacting to changes in the economy, family norms, or religious organizations. Rather, they are attempting to renegotiate their relationships to these institutions by attempting to construct autonomous, generative selves. For example, these men’s desire for autonomy in jobs seems rooted in their rejection of the monotony and limited autonomy that their fathers and grandfathers experienced in the workplace, along with a new ethos of self-expression. Similarly, these working-class men focus on their ties to their children even when they have little relationship with the children’s mothers, and they seek spiritual fulfillment even though they disdain organized religion. ... In sum, these working-class men show both a detachment from institutions and an engagement with more autonomous forms of work, childrearing, and spirituality ... . Autonomy refers to independent action in pursuit of personal growth and development. Personal growth has come to be highly valued among middle class Americans but until recently has not been associated with the working class. ... [P]ast scholarship typically assumed that such forms of action would usually only be found among those so materially comfortable that they needn’t spend time worrying about their economic circumstances ...

Our interviews strongly suggest that the autonomous, generative self that many men described is also a haphazard self. For example, vocational aspirations usually remain nebulous and tentative, rarely taking the form of an explicit strategy. In the meantime, career trajectories are often replaced by a string of random jobs. These men typically transitioned to parenthood more by accident than design, and in the context of tenuous romantic relationships. ... Religious community and a systemic belief system have been replaced by a patched-together religious identity that holds little sway over behavior, especially as it is divorced from the communal aspects of faith that have adhered working-class men to a set of behavioral norms. ...

The optimistic reading of the developments we have described is that workingclass men are now sharing in the autonomy and generativity that was largely the province of middle- and upper-class men in previous generations. Moreover, the interest they show in being involved as fathers and in helping others could represent a widening of the boundaries of masculinity in ways that are more consistent with contemporary family and work life. The pessimistic reading is that these men are pursuing goals that they are unlikely to achieve due to their lack of social integration. They must find their way without ties to steady work, stable families, and organized religion. Without social support, their chances of success diminish. Those who fail to achieve the autonomous, generative selves they crave will have little to fall back on and few people to prevent them from sinking into despair.

In other words, the problems of low-skilled men in US society are certainly not just a matter of income, and not just a matter of having a job, either. Instead, they are related to a more wide-ranging disconnectness, which shows up across many domains of behavior and outcomes.
Posted by Timothy Taylor at 10:57 AM