How Single Payer Requires Many Choices

I sometimes hear "single payer" spoken as if it was a complete description of a plan for revising the US health care system. But "single payer" actually involves a lot of choices. The Congressional Budget Office walks through the options in their report "Key Design Components and Considerations for Establishing a Single-Payer Health Care System" (May 2019).

As a preview of some of these issues, its worth noting that a some prominent countries with universal health coverage and reasonably good cost control (at least by US standards!) use regulated multipayer systems, like Germany, Switzerland and Netherlands. For those who like the sound of "Medicare for All," it's worth remembering that a certain number of analysts don't consider Medicare to be a single-payer system, because of the large role played by private insurers in the Medicare Advantage program, while all of Medicare's drug benefits (in Part D of the program) are delivered by private insurers.

However, if one narrows the options to an actual single player plan, which is the label typically put on Canada, Denmark, the UK, Sweden and others, a number of questions still need to be answered. Here's a chart from the report showing many of these questions, but because I fear it won't be readable in this blog format, I repeat a number of the questions below: 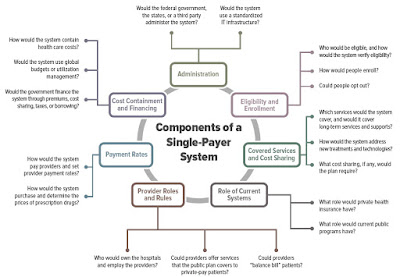 Would the plan be run by the federal government, the states, or some third-party administration? In Canada, for example, national health insurance is best-understood as 13 separate plans run by the provinces and territories. Would the single-payer plan use a single information technology infrastructure nationwide?

Who determines exactly what services are covered or not covered by the single payer plan? Who decides when new treatments would be covered? Would the mandated package of benefits cover outpatient prescription drugs? What about dental, vision, and mental health services? These are not mandated benefits in Canada.

Would there be cost-sharing for physician and hospital services? There is in Sweden, but not in the United Kingdom. How about a limit on out-of-pocket spending? There is such a limit in Sweden, but not in the UK. Would long-term care services be covered? The answer is "yes" in Sweden, "limited" in the UK, and "no" in Canada. If there is cost-sharing, would it take the form of deductibles, co-payments, or co-insurance?

Will supplemental health insurance be allowed? "In England, private insurance givespeople access to private providers, faster access to care, or coverage for complementary or alternative therapies, but participants must pay for it separately in addition to paying their individual required tax contributions to the NHS. In Australia, private insurance covers services that the public plan does not, such as access to private hospitals, a choice of specialists in both public and private hospitals, and faster access to nonemergency care."

Would people be allowed to "opt out" of the government health insurance plan and purchase private insurance instead?

Will hospitals be publicly owned, privately owned, or a mixture? Will hospitals be paid with a global budget to allocate across patients, or by a payment based on what patients are diagnosed with what conditions, or by fee-for-service? "Currently, about 70 percent of U.S. hospitals are privately owned: About half are private, nonprofit entities, and 20 percent are for-profit. Almost all physicians are self-employed or privately employed. A single-payer system could retain current ownership structures, or the government could play a larger role in owning hospitals and employing providers. In one scenario, the government could own the hospitals and employ the physicians, as it currently does in most of the VHA [Veterans Health Administration] system."

Will doctors be salaried public employees? If they are private providers, will they be paid on a fee-for-service basis, or receive a per-head or "capitation" payment based on the number of patients they serve? In many single-payer systems, the primary care physicians are private, but the outpatient specialist physicians are sometimes (Denmark) or always (UK) public and salaried.

How are prices to be determined for prescription drugs?

Does the financing for the system come from general tax revenues (Canada), an earmarked income tax (Denmark), a mixture of general revenues and payroll taxes (UK), or some other source?

The CBO report goes into these kinds of questions, and others, in more detail. My point here isn't to argue for or against "single payer." There are versions of single payer I would prefer to others, and although it's a story for another day, I like a lot of the elements of the German and Swiss multi-payer systems for financing health care. My point here is that if you are trying to describe a direction for reform of the US health care system, all $3.5 trillion of it, "single payer" is barely the beginning of a useful description; indeed, it sidesteps many of the tough decisions that would still need to be made.
Posted by Timothy Taylor at 9:00 AM