How To Cut US Child Poverty in Half

Poverty is always distressing, but poverty for children has the added element that it shapes the lives of future citizens, workers, and neighbors. The National Academies Press has published A Roadmap to Reducing Child Poverty, edited by Greg Duncan and Suzanne Le Menestrel (February 2019). There is of course nothing magic about specific "poverty line." Being just a little above the poverty line isn't all that different from being just a little below it. But the existence of such a line that is measured the same way over time can still be useful for analysis and policy.

The correlation between child poverty and later outcomes is unarguable. As one example, the report notes:


A study by Duncan, Ziol-Guest, and Kalil (2010) is one striking example. Their study uses data from a national sample of U.S. children who were followed from birth into their thirties and examines how poverty in the first six years of life is related to adult outcomes. What they find is that compared with children whose families had incomes above twice the poverty line during their early childhood, children with family incomes below the poverty line during this period completed two fewer years of schooling and, as adults, worked 451 fewer hours per year, earned less than half as much, received more in Food Stamps, and were more than twice as likely to report poor overall health or high levels of psychological distress . Men who grew up in poverty, they find, were twice as likely as adults to have been arrested, and among women early childhood poverty was associated with a six-fold increase in the likelihood of bearing a child out of wedlock prior to age 21.

But correlation isn't causation, of course, as economists (and this study) are quick to note. For example, say that there is a strong correlation between families in poverty and a lower education level for the parents. Perhaps a substantial share of the problems for children in poverty are not caused by lower family income, but by the lower education level of parents. If the root cause is lower parental education levels, then raising these families above the poverty line in terms of income won't have much effect on the long-term problems faced by children from these families.

Making the case that various income-support programs will indeed address problems of children in poverty thus requires more detailed arguments, and the report goes through a number of studies in detail. But broadly speaking, raising families with children out of poverty affects the long-term outcomes for children in two ways. The report notes (citations omitted):


An “investment” perspective may be adopted ... emphasizing that higher income may support children’s development and well-being by enabling poor parents to meet such basic needs. As examples, higher incomes may enable parents to invest in cognitively stimulating items in the home (e.g., books, computers), in providing more parental time (by adjusting work hours), in obtaining higher-quality nonparental child care, and in securing learning opportunities outside the home. Children may also benefit from better housing or a move to a better neighborhood. Studies of some poverty alleviation programs find that these programs can reduce material hardship and improve children’s learning environments.

These are ways in which additional income affects child development. Here are a couple of examples, chosen from meny, of the evidence that has accumulate on this point. The report writes:

Neuroscientists have produced striking evidence of the effect of early-life economic circumstances on brain development. Drawing from Hanson et al. (2013), Figure 3-3 illustrates differences in the total volume of gray matter between three groups of children: those whose family incomes were no more than twice the poverty line (labeled “Low SES” in the figure); those whose family incomes were between two and four times the poverty line (“Mid SES”); and those whose family incomes were more than four times the poverty line (“High SES”). Gray matter is particularly important for children’s information processing and ability to regulate their behavior. The figure shows no notable differences in gray matter during the first nine or so months of life, but differences favoring children raised in high-income families emerge soon after that. Notably, the study found no differences in the total brain sizes across these groups—only in the amount of gray matter." 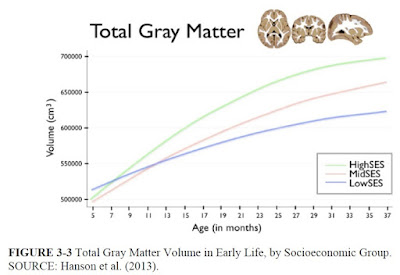 This study is again a correlation, not a proof of causality. As the report notes: "However, the existence of these emerging differences does not prove that poverty causes them. This study adjusted for age and birth weight, but not for other indicators of family socioeconomic status that might have been the actual cause of these observed differences in gray matter for children with different family incomes." But with all due caution rigorously observed, it seems to me a highly suggestive correlation.

Other studies look at the long-term effects of existing government programs that have raised income levels for poor families. Here's another example:

In their 2016 study of possible long-term effects of Food Stamp coverage in early childhood on health outcomes in adulthood, Hoynes, Schanzenbach, and Almond focus on the presence or absence of a cluster of adverse health conditions known as metabolic syndrome. In the study, metabolic syndrome was measured by indicators for adult obesity, high blood pressure, diabetes, and heart disease. Scores on these indicators of emerging cardiovascular health problems increased (grew worse) as the timing of the introduction of Food Stamps shifted to later and later in childhood (Figure 3-4). The best adult health was observed among individuals in counties where Food Stamps were already available when these individuals were conceived. Scores on the index of metabolic syndrome increase steadily until around the age of five. 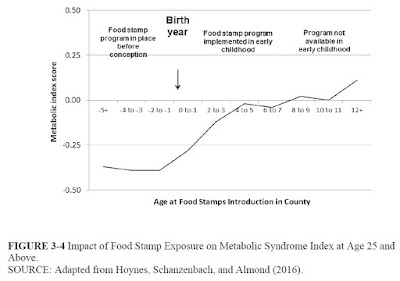 Add all these kinds of studies and factors up, and you can obtain a rough-and-ready estimate a total cost of child poverty.

Holzer et al. (2008) base their cost estimates on the correlations between childhood poverty (or low family income) and outcomes across the life course, such as adult earnings, participation in crime, and poor health. ... Their estimates represent the average decreases in earnings, costs associated with participation in crime (e.g. property loss, injuries, and the justice system), and costs associated with poor health (additional expenditures on health care and the value of lost quantity and quality of life associated with early mortality and morbidity) among adults who grew up in poverty. ... Holzer et al. (2008) make a number of very conservative assumptions in their estimates of earnings and the costs of crime and poor health. ... All of these analytic choices make it likely that these estimates are a lower bound that understates the true costs of child poverty to the U.S. economy.

McLaughlin and Rank (2018) build on the work of Holzer and colleagues by updating their estimates in 2015 dollars and adding other categories of the impact of childhood poverty on society. They include increased corrections and crime deterrence costs, increased social costs of incarceration, costs associated with child homelessness (such as the shelter system), and costs associated with increased childhood maltreatment in poor families (such as the costs of the foster care and child welfare systems). Their estimate of the total cost of childhood poverty to society is over $1 trillion, or about 5.4 percent of GDP. ...  They do make it clear that there is considerable uncertainty about the exact size of the costs of childhood poverty. Nevertheless, whether these costs to the nation amount to 4.0 or 5.4 percent of GDP—roughly between $800 billion and $1.1 trillion annually in terms of the size of the U.S. economy in 2018—it is likely that significant investment in reducing child poverty will be very cost-effective  over time.

Of course, various programs are already reducing the number of children who live below the poverty line. The figure shows estimates of what the child poverty rate would have been without certain programs, including the Earned Income Credit, the Child Tax Credit, the Supplemental Nutrition Assistance Program ("food stamps"), Supplemental Security Income, Social Security, unemployment compensation, and others. (One warning about the figure: the poverty rate for children is given here as 13%, because the study is using a Supplemental Poverty Measure that (for example) includes a value for in-kind benefits like Medicaid.) 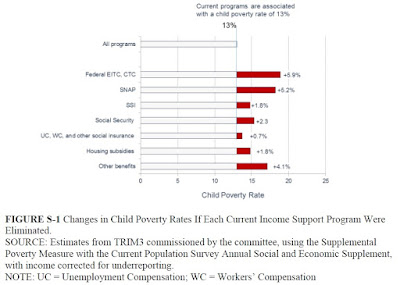 What additional programs would it take to reduce US child poverty by half? The report looks at a range of programs and designs and combinations, seeking to provide  menu of options rather than a single recommendation. For example, one can look at general assistance linked directly to work, like the Earned Income Credit, or assistance like food stamps or housing vouchers. One could provide means-tested benefits only to the poor, or a universal benefit to all children--but where the value of that benefit would treated be taxable income for the non-poor. But for example, here's one set of policies that would make a substantial difference, with their estimated effects and costs. 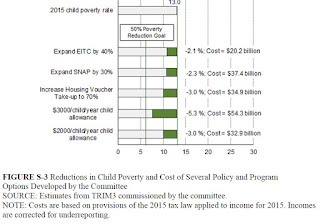 For example, if one chose the four top items on this list, the annual cost would be about $160 billion. The benefits later in life would be considerably larger.

I don't propose spending $160 billion lightly. But I will point out that the expansion of the health insurance under the Patient Protection and Affordable Care Act of 2010 costs the US government over $100 billion per year.  Similarly, the costs of the Tax Cuts and Jobs Act passed in 2017 are projected to have an average cost of $100 billion per year (or more?) In short, our political system does seem fully capable of belching up expenditures of this size when the stars are properly aligned.

As the report points out, some American cousins have taken the plunge to reducing child poverty by half.

The United States spends less to support low-income families with children than peer English-speaking countries do, and by most measures it has much higher rates of child poverty. Two decades ago, child poverty rates were similar in the United States and the United Kingdom. That began to change in March 1999, when Prime Minister Tony Blair pledged to end child poverty in a generation and to halve child poverty in 10 years. Emphasizing increased financial support for families, direct investments in children, and measures to promote work and increase take-home pay, the United Kingdom enacted a range of measures that made it possible to meet the 50 percent poverty reduction goal by 2008—a year earlier than anticipated. More recently, the Canadian government introduced the Canada Child Benefit in its 2016 budget. According to that government’s projections, the benefit will reduce the number of Canadian children living in poverty by nearly half.

Personally, I would be a lot more comfortable with the extent of US inequality if the child poverty rate was considerably lower, and thus the starting points for American children were closer together.
Posted by Timothy Taylor at 10:30 AM