I was hired back in 1986 to be the Managing Editor for a new academic economics journal, at the time unnamed, but which soon launched as the Journal of Economic Perspectives. The JEP is published by the American Economic Association, which back in 2011 decided--to my delight--that it would be freely available on-line, from the current issue back to the first issue. You can download it various e-reader formats, too. Here, I'll start with the Table of Contents for the just-released Spring 2019 issue, which in the Taylor household is known as issue #128. Below that are abstracts and direct links for all of the papers. I may blog more specifically about some of the papers in the next week or two, as well. 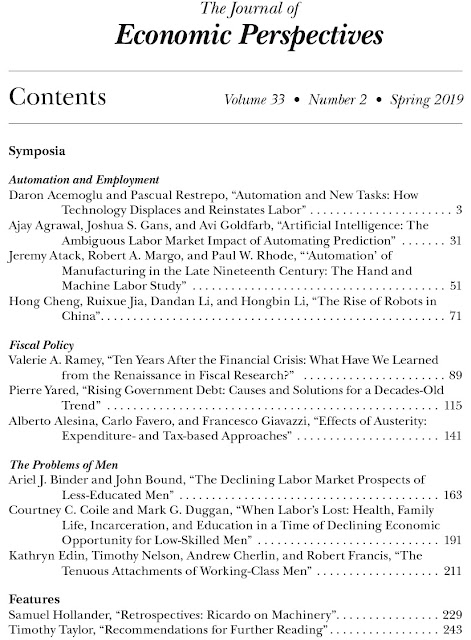 "Automation and New Tasks: How Technology Displaces and Reinstates Labor," by Daron Acemoglu and Pascual Restrepo
We present a framework for understanding the effects of automation and other types of technological changes on labor demand, and use it to interpret changes in US employment over the recent past. At the center of our framework is the allocation of tasks to capital and labor—the task content of production. Automation, which enables capital to replace labor in tasks it was previously engaged in, shifts the task content of production against labor because of a displacement effect. As a result, automation always reduces the labor share in value added and may reduce labor demand even as it raises productivity. The effects of automation are counterbalanced by the creation of new tasks in which labor has a comparative advantage. The introduction of new tasks changes the task content of production in favor of labor because of a reinstatement effect, and always raises the labor share and labor demand. We show how the role of changes in the task content of production—due to automation and new tasks—can be inferred from industry-level data. Our empirical decomposition suggests that the slower growth of employment over the last three decades is accounted for by an acceleration in the displacement effect, especially in manufacturing, a weaker reinstatement effect, and slower growth of productivity than in previous decades.
Full-Text Access | Supplementary Materials


"The Rise of Robots in China," by Hong Cheng, Ruixue Jia, Dandan Li and Hongbin Li
China is the world's largest user of industrial robots. In 2016, sales of industrial robots in China reached 87,000 units, accounting for around 30 percent of the global market. To put this number in perspective, robot sales in all of Europe and the Americas in 2016 reached 97,300 units (according to data from the International Federation of Robotics). Between 2005 and 2016, the operational stock of industrial robots in China increased at an annual average rate of 38 percent. In this paper, we describe the adoption of robots by China's manufacturers using both aggregate industry-level and firm-level data, and we provide possible explanations from both the supply and demand sides for why robot use has risen so quickly in China. A key contribution of this paper is that we have collected some of the world's first data on firms' robot adoption behaviors with our China Employer-Employee Survey (CEES), which contains the first firm-level data that is representative of the entire Chinese manufacturing sector.
Full-Text Access | Supplementary Materials

"Ten Years after the Financial Crisis: What Have We Learned from the Renaissance in Fiscal Research?" by Valerie A. Ramey
This paper takes stock of what we have learned from the "Renaissance" in fiscal research in the ten years since the financial crisis. I first discuss the new innovations in methodology and various strengths and weaknesses of the main approaches to estimating fiscal multipliers. Reviewing the estimates, I come to the surprising conclusion that the bulk of the estimates for average spending and tax change multipliers lie in a fairly narrow range, 0.6 to 1 for spending multipliers and -2 to -3 for tax change multipliers. However, I identify economic circumstances in which multipliers lie outside those ranges. Finally, I review the debate on whether multipliers were higher for the 2009 Obama stimulus spending in the United States or for fiscal consolidations in Europe.
Full-Text Access | Supplementary Materials


"Rising Government Debt: Causes and Solutions for a Decades-Old Trend," by Pierre Yared
Over the past four decades, government debt as a fraction of GDP has been on an upward trajectory in advanced economies, approaching levels not reached since World War II. While normative macroeconomic theories can explain the increase in the level of debt in certain periods as a response to macroeconomic shocks, they cannot explain the broad-based long-run trend in debt accumulation. In contrast, political economy theories can explain the long-run trend as resulting from an aging population, rising political polarization, and rising electoral uncertainty across advanced economies. These theories emphasize the time-inconsistency in government policymaking, and thus the need for fiscal rules that restrict policymakers. Fiscal rules trade off commitment to not overspend and flexibility to react to shocks. This tradeoff guides design features of optimal rules, such as information dependence, enforcement, cross-country coordination, escape clauses, and instrument versus target criteria.
Full-Text Access | Supplementary Materials


"Effects of Austerity: Expenditure- and Tax-Based Approaches," by Alberto Alesina, Carlo Favero and Francesco Giavazzi
We review the debate surrounding the macroeconomic effects of deficit reduction policies (austerity). The discussion about "austerity" in general has distracted commentators and policymakers from a very important result, namely the enormous difference, on average, between expenditure- and tax-based austerity plans. Spending-based austerity plans are remarkably less costly than tax-based plans. The former have on average a close to zero effect on output and lead to a reduction of the debt/GDP ratio. Tax-based plans have the opposite effect and cause large and long-lasting recessions. These results also apply to the recent episodes of European austerity, which in this respect were not especially different from previous cases.
Full-Text Access | Supplementary Materials

Symposium on the Problems of Men

"The Declining Labor Market Prospects of Less-Educated Men," by Ariel J. Binder and John Bound
Over the last half century, US wage growth stagnated, wage inequality rose, and the labor-force participation rate of prime-age men steadily declined. In this article, we examine these worrying labor market trends, focusing on outcomes for males without a college education. Though wages and participation have fallen in tandem for this population, we argue that the canonical neoclassical framework, which postulates a labor demand curve shifting inward across a stable labor supply curve, does not reasonably explain the data. Alternatives we discuss include adjustment frictions associated with labor demand shocks and effects of the changing marriage market—that is, the fact that fewer less-educated men are forming their own stable families—on male labor supply incentives. In the synthesis that emerges, the phenomenon of declining prime-age male labor-force participation is not coherently explained by a series of causal factors acting separately. A more reasonable interpretation, we argue, involves complex feedbacks between labor demand, family structure, and other factors that have disproportionately affected less-educated men.
Full-Text Access | Supplementary Materials


"When Labor's Lost: Health, Family Life, Incarceration, and Education in a Time of Declining Economic Opportunity for Low-Skilled Men," by Courtney C. Coile and Mark G. Duggan
The economic progress of US men has stagnated in recent decades. The labor force participation rate of men ages 25-54 peaked in the mid-1960s and has declined since then (according to the Bureau of Labor Statistics), while men's real median earnings have been flat since the early 1970s. These population averages mask considerably larger declines in participation among less-educated and non-white men as well as substantial increases in wage inequality. In this paper, we seek to illuminate the broader context in which prime-age men are experiencing economic stagnation. We explore changes for prime-age men over time in education, mortality, morbidity, disability program receipt, family structure, and incarceration rates. We focus on prime-age men, namely those ages 25-54, and on the years 1980-2016 (or 2017 when possible), encompassing much of the period of reduced economic progress for low-skilled men.
Full-Text Access | Supplementary Materials


"The Tenuous Attachments of Working-Class Men," by Kathryn Edin, Timothy Nelson, Andrew Cherlin and Robert Francis
In this essay, we explore how working-class men describe their attachments to work, family, and religion. We draw upon in-depth, life history interviews conducted in four metropolitan areas with racially and ethnically diverse groups of working-class men with a high school diploma but no four-year college degree. Between 2000 and 2013, we deployed heterogeneous sampling techniques in the black and white working-class neighborhoods of Boston, Massachusetts; Charleston, South Carolina; Chicago, Illinois; and the Philadelphia/Camden area of Pennsylvania and New Jersey. We screened to ensure that each respondent had at least one minor child, making sure to include a subset potentially subject to a child support order (because they were not married to, or living with, their child's mother). We interviewed roughly even numbers of black and white men in each site for a total of 107 respondents. Our approach allows us to explore complex questions in a rich and granular way that allows unanticipated results to emerge. These working-class men showed both a detachment from institutions and an engagement with more autonomous forms of work, childrearing, and spirituality, often with an emphasis on generativity, by which we mean a desire to guide and nurture the next generation. We also discuss the extent to which this autonomous and generative self is also a haphazard self, which may be aligned with counterproductive behaviors. And we look at racial and ethnic difference in perceptions of social standing.
Full-Text Access | Supplementary Materials

Features
"Retrospectives: Ricardo on Machinery," by Samuel Hollander
We are currently experiencing an outpouring of concern both popular and professional regarding technological unemployment. I shall be discussing an apparent about-turn on the subject by David Ricardo (1772-1823), who at different times, even in different chapters of the same book, and, indeed, even at different places in the same chapter, seemed to be on both sides of the argument as to whether technological unemployment should be a matter for concern. In a chapter entitled "On Machinery," added to the third edition of his Principles of Political Economy (1821), which comprises volume 1 of his Collected Works (1951-73), Ricardo announced that he had become concerned about the possibility, even likelihood, of technical change detrimental to labour's interests. However, in the very same "On Machinery" chapter, Ricardo also outlined qualifications to show that there was little need for concern. Ricardo's opposing messages are reflected in contrasting reactions to the chapter "On Machinery." Some readers—including Thomas Robert Malthus and J. R. McCulloch—understood it as supporting working-class opposition to machinery. Others—including John Stuart Mill and Sir John Hicks—find therein the answer to such opposition.
Full-Text Access | Supplementary Materials